1 The Religious Chaos of the Late Middle Ages

2 Overview  The Catholic Church Dominated the social, political and economic trends of the Middle Ages.  Popes continually gained more power and acted like kings instead of religious leaders.  Constant battles for power between Popes and Kings

4 Pope Boniface VIII  1302 “Unam Sanctium” this basically claimed that “all are subject to the Pope”  This was an attempt to reinforce Papal authority.  This was to prevent Kings from France and England from taking Church money by way of the state taxing the Church. (The Church was the wealthiest institution)  King Philip states that the Kings protect the faith and therefore taxing the Church is justified.

5 Power means Control  King Philip IV of France came down and captured Boniface…… Boniface “conveniently” died soon after being captured.  Philip, with his whole military in Rome, influenced the Cardinals in to appoint a French Pope.

8 Reactions to the Great Schism  People did not know which Pope to follow.  Which Pope spoke for God? How did they know they were following the “right” Pope.  Men, such as John Wycliff and John Hus, claim that people only need to read the Bible and the church is not needed.  The Great Schism made the Church questionable.

10 The Council of Constance, 1417  All Popes were forced to resign, there were 3 at the time. That was because an earlier Council had appointed one and the other two Popes did not listen to him.  Pope Martin V was selected

11 Religious Chaos  Because of the Chaos within the Catholic Church, the Babylonian Captivity and Great Schism set the Stage for the Reformation.  These events allow for the Church to be criticized and that there is doubt in the churches infallibility. 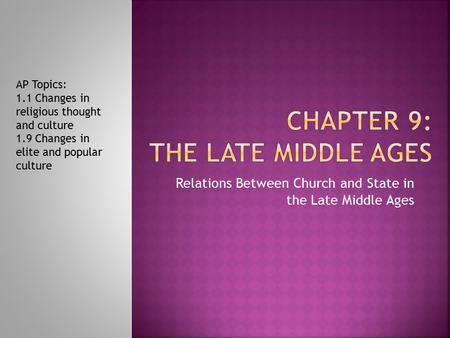