Presentation on theme: "The Avignon Papacy. What is going on? During the 13 th -14 th centuries everything seemed to go wrong Christendom is disintegrated – Nations are fighting."— Presentation transcript:

2 What is going on? During the 13 th -14 th centuries everything seemed to go wrong Christendom is disintegrated – Nations are fighting nations – Church and state do not function together anymore The black death – Aka the bubonic plague – One third of the population in Europe died

3 Late in the 13 th century, rulers started to see themselves as solely responsible for what happened in their respective countries – The King of France and England decided that members of the clergy were obligated to pay taxes to the crown – The English king said the clergy would have no protection of law until they paid taxes

6 The arrest Boniface was arrested and died a month later Pope Boniface’s successor served as a pope for only 8 months and then no one was chosen for almost a year – Of the 16 cardinals at the time, none of them wanted to elect someone who would continue the conflicts with the French and English Kings.

7 The Avignon Papacy The cardinals reached a compromise that they hoped would appease both the English and the French They chose Bertrand de Got as Pope – He was under the control of the English – He had been born a Frenchman and had been a personal friend of the French king since childhood – He was crowned as pope in Lyons France – He was suffering from cancer and as a result he decided to stay in a town in Avignon in the kingdoms of Naples. This decision affected the church because for the next 70 years, the pope (aka bishop of Rome) would not live in Rome but in Avignon, France. – Some argue that the pope moved to Avignon because Philip forced him to This event is known as the Avignon Papacy- the 70 years when the papacy headquarters was in Avignon and not Rome (the physical and spiritual center of the church)

9 Protests Not everyone agreed with the idea of the papacy headquarters being in Avignon People began protesting this move away from the papacy’s historical home of Rome Eventually those protesting won It was not church officials or secular rulers who got the papacy moved back to Rome Two women did: Catherine of Siena and Bridget of Sweden Bring the papacy to Rome

10 Catherine of Siena: her background She was one of 24 (25) children of the Benincasa family She was from Italy She was 5 years old when she had her first spiritual experience She struggled with doubts and demonic visions She experienced a profound sense of union with God She worked with those who were sick, including plague victims and condemned prisoners She wrote hundreds of letters to the pope and other religious and secular leaders offering them advice She also wrote about her religious experience She became to be known for her holiness

12 More troubles: the Great schism Gregory died within two years of the move Since they were back in Rome, the clergy elected a Roman pope- Urban VI But the French cardinals disagree with the election and elected a new Pope- of French origin- Clement VII – Who moved back to Avignon Urban was not going to give up his title of Pope and now the church had two popes, who set up to colleges of cardinal, two sets of papal administration, and two centers of power. This situation, in which two men claimed to be the pope at the same time, lasted 38 years and became known as the Great Schism

13 Resolving the schism After 38 years with more than one pope, the church held a council that forced all the people claiming to be popes to step down (there were up to three). The council appointed Martin V as the pope who was accepted by the majority of the church and the problem was settled

Download ppt "The Avignon Papacy. What is going on? During the 13 th -14 th centuries everything seemed to go wrong Christendom is disintegrated – Nations are fighting." 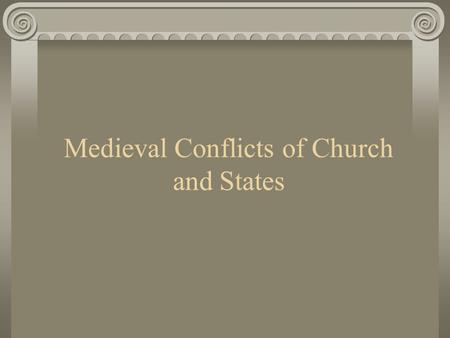