1 The Crusades Europe’s Unsuccessful Takeover of the Holy Land

2 The Holy Land ► Jerusalem – The Sacred City  For Jews, it is the spiritual capital which Solomon’s Temple once stood.  For Muslims, it is believed to be the place where Muhammad rose to heaven  For Christians it is the place where Jesus Christ was crucified and rose from the dead. ► Jerusalem was under Muslim rule since the 7 th Century.

3 Precursor to Crusades ► By 1095, Turks advance borders to within 100 miles of Constantinople ► Byzantine Emperor seeks help from Pope. ► Pope Urban II calls on European Kings to send nobles to drive back Muslims and reclaim Jerusalem

5 1 st Crusade 1099 C.E. ► Muslims were surprised  Christians were not as advanced, but Muslims were divided and weakened by war ► French and Norman Knights took Jerusalem  Crusaders massacred Jews, Muslims and even Christians living in the city ► Survivors sold into slavery  Jerusalem remained Christian for 80 years

7 3 rd Crusade 1187-1192 C.E. ► Salah al-Din, Sultan of Egypt recaptured Jerusalem for the Muslims ► Does not slaughter Christians, he lets them pay for their freedom ► For this, he was well respected in Europe

9 Short Term Effect of the Crusades ► After 10 Crusades and over 100 years, Europeans only controlled Jerusalem briefly after the first Crusade.

10 Long term Effects of the Crusades ► They weakened the remaining Byzantine Empire and left it open to Turkish attack. ► European kings gained authority while lords were on the Crusades. ► Wealth, power and land became as important to religion. ► Contact with the Byzantines, the Muslims and Jewish communities in the East led to a greater interest in learning. ► Created demand for good from the East: silk,spices, lemons and cloth. (This demand for goods also led to a demand for NEW TRADE ROUTES.) ► The Crusades help to breakdown feudalism in western Europe.

11 Reconquista ► Christians plan to retake Spain from Muslim rule  Muslims, Jews and Christians lived in some cities together in peace

13 Inquisition ► King Ferdinand and Queen Isabella wanted to unite Spain as a Catholic country ► Muslims and Jews forced to convert were now called into question by judges  Inquisitors used torture to find out if converts were practicing old religion ► Thousands were burned at the stake  Nearly 200,000 Jews were expelled from Spain

14 Inquisition ► Circa 1500, A prisoner undergoing torture at the hands of the Spanish Inquisition. Monks in the background wait for his confession with quill and paper. 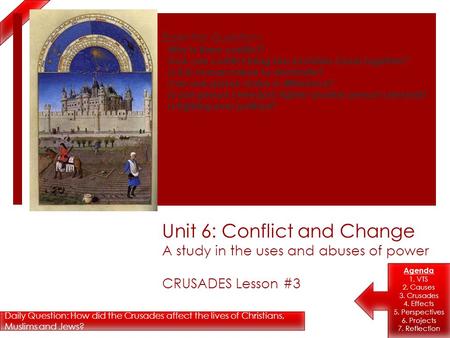