Presentation on theme: "Major Trade Patterns in the Eastern Hemisphere from 1000 to 1500 AD"— Presentation transcript:

3 Silk Road Trading Where did the Silk Roads start? Where did they end?
What goods came from China? compass—used by travelers to figure out what direction they were going paper—traveled through Muslim world to Byzantium and Western Europe porcelain textiles—fabric for clothes; silk

7 Indian Ocean Trading Maritime routes—trading across oceans, not land
Where will the ships travel? What goods and ideas will they carry? Textiles—made from silk, wool and cotton Spices—from islands in the Indian Ocean Crops for making sugar Lateen sail

8 Ideas from India What two religions started in India and spread to Southwest Asia?

10 Trans-Saharan Trade Routes
Trans means across, so across the Sahara Desert How will traders cross the desert? What very valuable good will come from West Africa?

14 Water Wheels and Wind Mills
Important technology for Medieval Europe: When the Black Death killed so many people, technology that could replace human work became even more important Early windmills were used to grind grain. They may have come from Persia. Water wheels were used for mining.

18 From China, Japan got . . . writing—Japanese did not have a system for writing, so they borrowed the Chinese characters Chinese architecture was brought to Japan by Korean architects Buddhism comes to Japan; coexists with Shintoism

19 Shintoism Shintoism is an ethnic religion unique to Japan—it did NOT spread In Shintoism, nature and natural forces are very important. Shintos believe that kamis (gods) reside in nature. Ancestors and the emperor are also important and are worshipped.

23 Axum Axum was a Christian Kingdom. Today it is Ethiopia.
Axum conquered the Kush in 350 AD. Why would a kingdom be located here? Why would this kingdom by Christian?

31 Ghana as a Center of Trade
Gold came from the land South of Ghana. Salt came from the Sahara Desert North of Ghana. Neither came from Ghana itself. How did Ghana make money from gold and salt then? TAXES!!!!!! Traders had to pay a tax when they entered Ghana and when they left Ghana. Ghana became very rich.

32 Why salt? Gold was used by the people in Muslim lands and Italy who made coins from gold. Muslims used gold to buy silk and porcelain from China. But why salt? Salt was very valuable: When people live in hot places, they sweat a lot. They lose salt when they sweat. Bodies need to replace this salt. Salt helps to preserve meat so that it doesn’t rot so fast. Cows need salt and many people raised cows.

33 Timbuktu This city was an important center of trade and learning in the Mali Empire. One of the first universities was located here.

34 Religious Beliefs in West Africa
West Africans kept many of their own beliefs, like animism. Animism is the belief that all nature objects have souls, or they are alive. This is similar to the ______________ beliefs of Japan. Islam spread through North Africa and was also important in Ghana, Mali and Songhai. Many people who converted to Islam kept their beliefs in animism. 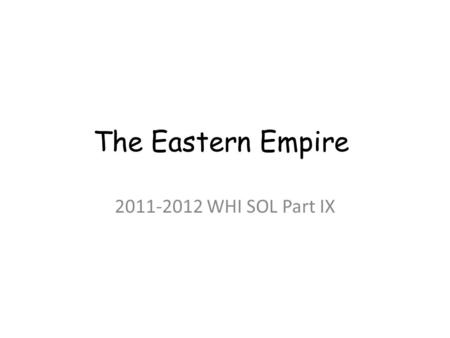