1 Magazine Conventions Seb Hallett Typography: font
A Masthead: the title used by known typography to make the readers become familiar with what magazine they are reading. Main image: typically showing the person (s) or object directly associated with the main feature/article. Selling line/strapline: seen an introductory headline below the masthead describing the magazine. Pug: ‘the ears of the magazine’ tend to be found in the left or right hand corner of the font covers. The price of the magazine, logo or promotion in order to catch the readers eye. The list is ongoing however these are the main conventions which all the mainstream and independent magazines use.

2 The text above the title is used to promote a film by the same director with some of the same actors included. This makes a lot of the content within about Christopher Nolan. Mast head - The title of the magazine ‘Empire’ in big bold letters, in the centre of the page. Menu - News from other films which are also in the same theme as the main article ‘Inception’. This is shown by the way the text is stretched facing Leonard Dicaprio. Website positioned under the title to ensure it is seen. Name of the film which the main article is conveying positioned right in the middle of the page. This is to make sure that is the main thing the reader looks at. Name of the director ‘christopher Nolan’ which is used to draw his fans in. Spread - The picture is of the main character played by Dicaprio . The picture is different to other inception pictures, this will leave the fans thinking there is exclusive content inside. Background of the cover is related to the main article. This relates to the promotional site of the article. Colour scheme is also related to the main article. This effects the whole cover as all the texts and fonts are relating to the inception colour scheme. Comparing 2 film greats which gives the audience an idea of the type of film inception is. Advert for some kind of competition. This is the only thing on the cover that doesn’t agree with the colour scheme.

3 ‘Essential preview’ makes the audience feel this magazine is a must have edition so raises sales.
Mast Head - The name of the main title ‘Total Film’ in bold letters placed centrally to show importance. Main actor in the film, Daniel Craig shown in order to draw the reader and audience in. This seperates Skyfall from other previous bond movies and suggests that bonds enemy may be his hardest opponent. Spread - The name of the film in big bold letters to draw in the audience and for clarity on what the main feature is about. Menu - This shows news of other big films in this case ‘The Hobbit’ which is coming out. This again helps draw the reader in. ‘First look of life of Pi’ this again makes the audience think that this edition is one of a kind.

4 This magazine gives you an exclusive look into the bond women which is unusual which helps make this magazine stand out. Mast Head - The title of the magazine ‘Empire’ in big bold letters, in the centre of the page. Main actor in the film, Robert Downey JR shown in order to draw the reader and audience in. Similar magazines by the same company ‘Empire’ with different avenger characters on the front. This is quirky and allows the fans to choose their favourite character. Spread - The name of the film in big bold letters to draw in the audience and for clarity on what the main feature is about. ‘The ultimate superhero movie assembled inside’ this suggests that this magazine has exclusive information on the film. This seperates empire from other magazines. Menu - Other films with similar themes to show the magazine offers the fans a range of other inclusive information.

5 What is the purpose of Film Magazines?
A magazine has to appeal to the reader and stand out so the reader is inclined to buy your magazine over other competing magazines. They have to stand out visually and they have to offer exclusive information about films or what ever genre it is so they ensure the reader chooses their magazine over any other. The genre for our film ‘The Hunter’ is crime/action and it is a mainstream film so our film will be found in either Empire magazine or Total film. Platforms such as these offer a lot of coverage for your film as they have many readers. Readers who read these type of magazines are seen to have some knowledge of film but aren’t fanatics as such. They want to know the big films which are coming out and information on a small range of mainstream films.

6 What does the main image say about the film?
The main image on the front of the magazine usually shows the main character of the film with a strong expression doing something related to the film. The image will have to stand out because the company who make the magazine will want this image to drawer the reader in so they buy the article. Furthermore if the main character is doing something unique or against convention the reader may be more inclined to buy the issue as they think this issue offers exclusive content which other magazines do not offer. The main picture says a lot about the film for example the Empire edition on ‘Hellboy 2’ has Hell Boy punching his fist as if he is ready for battle. This suggests the film will be hard hitting with a lot of fighting scenes within. This one picture in some cases can decide for the reader if they want to watch the film or not. It’s highly important. First impression is everything and is taken highly into account.

7 Comparing the 3 different magazines.
All three of these magazines are different and suit certain films. Empire is very much a mainstream magazine covering all the big blockbuster movies which have come from Hollywood. Total Film is similar to Empire however it covers more of a range and involves some independent films, it has a wider range of information on all films which suits more of a film fanatic fan. Whereas Empire magazine is for readers who want to know a lot about a smaller amount generally the big films such as ‘Dark Knight Rises’. Finally Little White Lies is for more independent films with a lower budget and the readers of this magazine tend to understand a lot about film (film fanatics) so they want a wider range of information covering new films etc. Our film is a mainstream film so it may be best suited to Empire magazine or Total Film however we have a female protagonist which is unconventional so it could be suited to Little White Lies. We still need to make a decision. 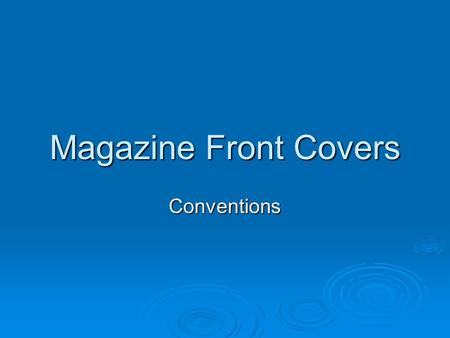