2 What are Mental Disorders?
Mental disorder- an illness in the mind that can effect thoughts, feelings, and behaviors of a person, preventing him or her from leading a happy, healthful, and productive life. 54 million people are affected by some form of mental disorder. Only one-third of those receive the help they need. Why would someone not receive help?

3 Two Classifications of Mental Disorders:
Organic Disorders- caused by a physical illness or an injury that affects the brain. Brain tumors, infections, chemical imbalances, exposure to drugs and toxins, or injuries resulting in brain damage. Functional Disorders- have a psychological cause and do not involve brain damage. May result from heredity, stress, emotional conflict, fear, ineffective coping skills. Often are tied to disturbing events in childhood, such as abuse, serious illness, or traumatic death of a close relative. Also tied to recent events such as divorce, economic hardships, or natural disasters.

4 TYPES OF MENTAL DISORDERS: (There are over 300 types!)
ANXIETY DISORDERS: A condition in which real or imagined fears are difficult to control. Characterized by chronic fear. People arrange their lives to avoid situations that make them feel anxious or fearful.

5 Four Classifications of Anxiety Disorders:
PHOBIAS: A strong and irrational fear of something specific. People with phobias avoid the object at all costs. May make them a prisoner of their own home. Examples

7 Four Classifications of Anxiety Disorders:
PANIC DISORDERS: Suffer from sudden, unexplained feelings od terror. “Panic attacks” are accompanied by symptoms such as trembling, a pounding heart, shortness of breath, or dizziness. Attacks may occur at any time or place, but most are triggered by a particular object, condition, or situation.

8 Four Classifications of Anxiety Disorders:
POST-TRAMATIC STRESS DISORDER: A condition that may develop after exposure to a terrifying event that threatened or caused physical harm. Common after personal assault, rape, disasters, plane crashes, or military combat. Symptoms are flashbacks, nightmares, emotional numbness, sleeplessness, guilt, and problems with concentration. The disorder may arise weeks or months after the event that caused it.

9 TYPES OF MENTAL DISORDERS: (Continued)
MOOD DISORDERS: An illness often with an organic cause, that involves mood extremes that interfere with everyday living. The emotional swings of mood disorders are extreme in both intensity and duration. (not your normal ups and downs)

10 2 Types of Mood Disorders:
Clinical Depression: Feelings of sadness, hopelessness, or despair last for more than a few weeks and interfere with daily interests and activities. Can affect concentration, sleep, performance at school or work, or handle everyday decisions and challenges. Clinical depression results from a chemical imbalance that a person cannot overcome without professional help. Depression often runs in families and can be biologically based. Bipolar Disorder: AKA manic-depressive disorder, causes extreme mood changes, energy levels, and behavior. Manic “highs” and depressive “lows”----Figure 9.1 pg 227

11 TYPES OF MENTAL DISORDERS: (Continued)
CONDUCT DISORDERS: A pattern of behavior in which the rights of others or basic social rules are violated. Lying, theft, aggression, violence, truancy, arson, and vandalism. More common amongst makes than females. Although they may act “tough” usually they have low self-esteem. May also have symptoms of other mental disorders including anxiety, depression, and substance abuse. With out treatment they may be unable to the demands of adulthood and continue to have problems relating to others, holding a job, and behaving in appropriate ways.

12 TYPES OF MENTAL DISORDERS: (Continued)
SCHIZPHRENIA: A severe mental disorder in which a person loses contact with reality. Symptoms include delusions, hallucinations, and thought disorders. Caused by a combination of genetic factors and chemical and structure changes in the brain. Sufferers have difficulty understanding between real and imaginary events. A common misconception is that they have split personalities or are a danger to themselves or others. Example

13 TYPES OF MENTAL DISORDERS: (Continued)
PERSONALITY DISORDER: People with personality disorders think and behave in ways that make it difficult for them to get along with others. Usually in constant conflict with others-family, friends, teachers, coworkers, or supervisors.

14 3 Types of Personality Disorders:
Antisocial Personality Disorder: Tend to be irritable, aggressive, impulsive, and violent. Many times they are unable to show remorse for their behavior. Borderline Personality Disorder: Frequently experience a series of troubled relationships. Tend to engage in high-risk activities and have poor self esteem. Fear abandonment but often lash out violently at those they need the most. Passive-Aggressive Personality Disorder: Often uncooperative. Resent being told what to do, yet rely on others’ direction. Angry over issues of control, they show their anger indirectly. For example: If they do not want to take part in an activity they may forget to show up or may arrive late and leave early. 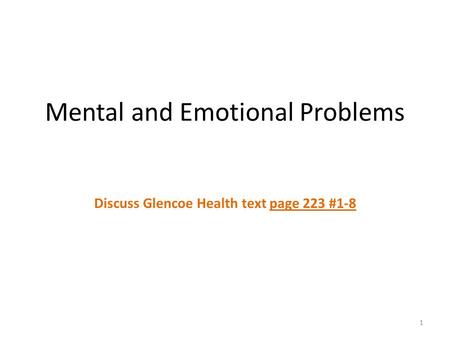 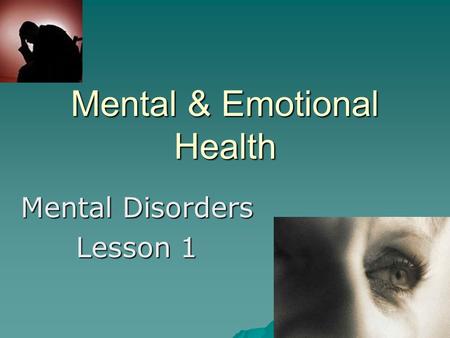 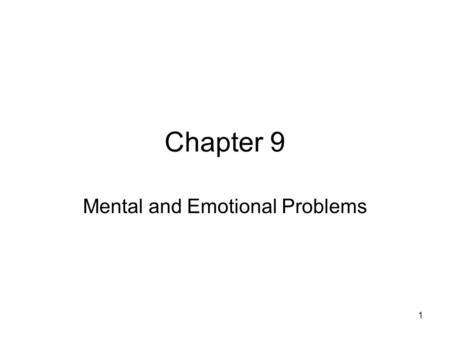 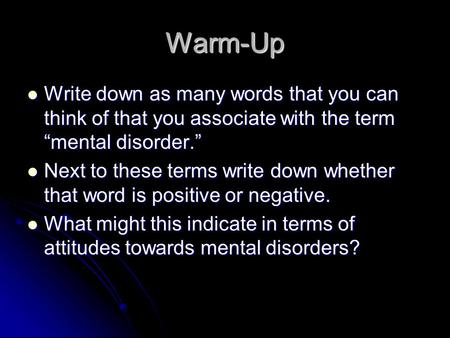