2 Objectives 1. Describe how the field of sociology developed.
2. Explain how the three main theoretical perspectives in sociology differ in their focus.

3 The analysis of society-sociology did not evolve until the 1800s.
The factors that led to the development of sociology : A. rapid social and political changes that took place in Europe during the Industrial Revolution. The factory replaced the home as the main site for manufacturing.

4 B. Rapid growth of the urban area led to a multitude of social problems. You had housing shortages, crime increased, and pollution. People adjusting from rural to urban life. Interactions in the rural were based on personal relationships. C. Over time it became harder to ignore the effect of society on the individual. Political movements emerged such as: the American and French Revolutions.

5 D. By the 1800’s many scholars believed that the social world was based on a set of basic principles that could be studied and analyzed with the use of scientific research methods.

6 The Early Years The heritage of Sociology took place in the 1800s in the countries of France, England, and Germany. The most influential sociologists were Auguste Comte, Herbert Spencer, Karl Marx, Emile Durkheim, and Max Weber.

7 Activity I will divide you into five groups.
You will be assigned one of the early sociologists covered in this section. A. Auguste Comte B. Herbert Spencer C. Karl Marx D. Emile Durkheim E. Max Weber

8 Imagine that you are museum curators who are creating exhibits about your assigned sociologists for a fictional Sociology Hall of Fame. Each group will conduct research on its sociologist and then use the information to create a multimedia exhibit. I will provide a place for your group to set up your assigned exhibit.

9 Current Perspectives Interactionist Perspective: ( Max Weber)how individuals interact with one another in society. Sociologists are interested in the ways in which individuals respond to one another in everyday situations. Symbol: anything that represents something else. For something to be a symbol members of society must agree on the meaning that is attached to it Symbolic Interaction: how people use symbols when interacting. Study topics such as child development, relationships within groups, and mate selection.

10 Symbolic Interaction and Mate Selection
You will be divided into groups. Imagine that you are editors for a magazine targeting young adults. Conduct research on some of the uses of symbolic interaction in mate selection. Create a one or two page magazine feature providing advice to young men and women on attracting a mate. The feature’s content should be based on the research, and each feature should include at least one illustration or photgraph. Features will be displayed.

13 Dysfunctional : negative consequence on the stability of the social system. [i.e. crime]
Manifest: intended and recognized Latent: unintended and unrecognized Manifest and Latent Functions: Public education provides a good example of manifest and latent functions. The manifest function, or intended purpose, of public schools is to educate youth. However, schools have several latent functions. They help socialize children, teach teamwork and cooperation, and teach societal values such as being honest.

14 Conflict Perspective Karl Marx example of conflict
Conflict Perspective: forces in society that promote competition and change. Sociologists do not limit attention to acts of violent conflict. They study nonviolent competition between various groups in society-men and women, people of different ages, or people of different racial or national backgrounds. Sociologist study: family decision-making, relationships among racial groups, and disputes between workers and employers. Conflict leads to social change, inevitable feature of society. 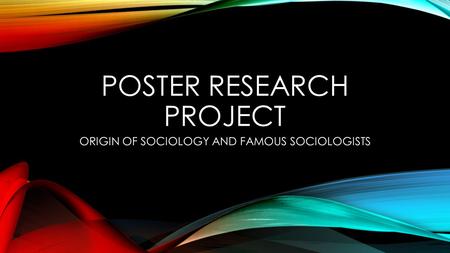