1 Sociology: Then and Now
Obj: describe how the field of sociology developed; explain how the three main theoretical perspectives in sociology differ in their focus.

2 The nature of social life and human interaction has been of interest to scholars throughout history. However, a separate academic discipline dedicated to the analysis of society – sociology - did not develop until the 1800s.

3 Several factors led to the development of sociology as a distinct field of study. The rapid social and political changes that took place in Europe as a result of the Industrial Revolution were of primary importance. The factory replaced the home as the main site for manufacturing. With the growth of factories came the growth of cities as people left their homes in the countryside in search of work.

4 The rapid growth of urban populations produced a multitude of social problems. The number of people seeking work outpaced available jobs. Housing shortages developed, crime increased, and pollution became a major problem. In addition, many people found it difficult to adapt to the impersonal nature of cities. Urban life was different from life in the small rural communities where most people were raised. Interactions in the country were based on personal relationships.

5 Over time, it became more difficult to ignore the effect of society on the individual. Individual liberty and individual rights became the focus of a wide variety of political movements. These demands for freedom and rights gave rise to the American and French Revolutions. These sweeping political, social, and economics changes caused some scholars to question the traditional explanations of life.

6 The Early Years Sociology took root in the 1800s, primarily in France, Germany, and England. These countries had most strongly felt the effects of the Industrial Revolution.

7 Auguste Comte Many people consider French philosopher Comte ( ) the founder of sociology as a distinct subject. He was one of the first scholars to apply the methods of the physical sciences to the study of social life. He also coined the term sociology to describe the study of society.

8 Like most French scholars of his day, Comte was intrigued by the causes and consequences of the French Revolution. As a result, Comte began to focus on two basic areas of study – social order and social change. He suggested that certain processes, which he called social statics, hold society together. Similarly, Comte argued that society changes through definite processes, which he called social dynamics. The basic principles of these two social forces, Comte believed, could be uncovered through the methods of scientific research. He hoped this knowledge could be used to reform society.

9 Herbert Spencer ( ), an English contemporary of Comte. He was strongly influenced by the views of Charles Darwin, an evolutionist from the 1800s. Spencer adopted a biological model of society.

10 In a living organism, the biological systems work together to maintain the organism’s health. Spencer attributed a similar process to society. Society, he said, is a set of interdependent parts that work together to maintain the system over time. Spencer also used Darwin’s theory of the evolution of biological organisms to describe the nature of society. Spencer considered social change and unrest to be natural occurrences during a society’s evolution toward stability and perfection.

11 Because he believed that the best aspects of society would survive over time, Spencer thought that no steps should be taken to correct social ills. Spencer also believed that only the fittest societies would survive over time, leading to a general upgrading of the world as a whole. Although the phrase “survival of the fittest” is often credited to Darwin, it was coined by Spencer to describe this process. Because of its similarities to Darwin’s ideas, Spencer’s view of society became known as social Darwinism.

12 Spencer’s ideas gained a wide following, particularly in Britain and France. However, like Comte, Spencer refused to read the writings of scholars whose ideas differed from his own. As a result, he disregarded the rules of careful scholarship and made scientifically unfounded claims about the workings of the world. Over time, Spencer’s social Darwinism fell out of favor.

13 Karl Marx ( ) Marx believed that the structure of a society is influenced by how its economy is organized. According to Marx, society is divided into two classes - the bourgeoisie, or capitalists, and the proletariat, or workers. The bourgeoisie own the means of production – the materials and methods used to produce goods and services. The proletariat, on the other hand, own nothing. The provide the labor needed to produce goods and provide services.

14 Marx believed this imbalance in power would inevitably lead to conflict between the capitalists and the workers. This class conflict would end only when the proletariat united to overthrow those in power. After this rebellion, Marx said, the victorious workers would build a classless society in which each citizen would contribute “according to his ability” and would be rewarded “according to his needs.”

16 Emile Durkheim ( ) he developed the country’s first university sociology course. Durkheim was particularly interested in the function of religion in maintaining social order, because he believed that shared beliefs and values were the glue that held society together.

17 The basis of his scientific analysis of society was his belief that sociologists should only study features of society that are directly observable. Ideas about observable phenomena, Durkheim noted, can be tested by applying the scientific tool of statistical analysis. He used this approach in his 1897 study, Suicide. This study examined suicide rates in several European countries. The first true sociological study, Suicide is still used by sociology professors and students today.

18 Max Weber ( ) Unlike Comte, Spencer, Marx, and Durkheim, Weber was interested in separate groups within society rather than in society as a whole. This emphasis on groups led Weber to focus more on the effect of society on the individual.

19 Weber also thought that sociologists should go beyond studying what can be directly observed and attempt to uncover the feelings and thoughts of individuals. Weber proposed doing this by using the principle of Verstehen. Verstehen involves an attempt to understand the meanings individuals attach to their actions. In essence, with Verstehen one puts oneself in the place of others and tries to see situations through their eyes.

21 Yet any particular example of the feature might not contain all of the characteristics described in the ideal type. For example, the ideal type for a school might not be a perfect representation of your school. However, you would recognize it as a general description of an educational institution.

24 Functionalist Perspective
The functionalist perspective is broadly based on the ideas of Comte, Spencer, and Durkheim. People who employ this perspective view society as a set of interrelated parts that work together to produce a stable social system. According to functionalists, society is held together through consensus. In other words, most people agree on what is best for society and work together to ensure that the social system runs smoothly. Topics of interest to functionalist sociologists include the functions that family or education serve in society.

25 Like Durkheim, functionalists view the various elements in society in terms of their functions, or their positive consequences for society. Recognizing that not everything in society operates smoothly, functionalists also label certain elements as dysfunctional. A dysfunction is the negative consequence an element has for the stability of the social system. Dysfunctional elements, such as crime, disrupt society rather than stabilize it.

26 In addition to being either positive or negative, functions can be either manifest or latent. A manifest function is the intended and recognized consequence of some element of society. For example, a manifest function of the automobile is to provide speedy transportation from one location to another. A latent function, on the other hand, is the unintended and unrecognized consequence of an element of society. A latent function of the automobile is to gain social standing through the display of wealth.

27 Conflict Perspective People who employ the conflict perspective focus on the forces in society that promote competition and change. Following in the tradition of Karl Marx, conflict theorists are interested in how those who possess more power in society exercise control over those with less power. Conflict theorists do not limit their attention to acts of violent conflict.

28 They are also interested in nonviolent competition between various groups in society – men and women, people of different ages, or people of different racial or national backgrounds. Some of the topics that conflict sociologists research include decision-making in the family, relationships among racial groups, and disputes between workers and employers.

29 According to conflict theorists, competition over scarce resources is at the basis of social conflict. Because resources such as power and wealth are in limited supply, people must compete with one another for them. Once particular groups gain control of society’s resources, they tend to establish rules and procedures that protect their interests at the expense of other groups. This leads to social conflict as those with less power attempt to gain access to desired resources. Conflict, in turn, leads to social change. Thus, conflict theorists see social change as an inevitable feature of society.

30 Interactionist Perspective
Functionalists and conflict theorists tend to focus on society in general or on groups within society. However, some sociologists adopt an interactionist perspective, focus on how individuals interact with one another in society. These sociologists are interested in the ways in which individuals respond to one another in everyday situations. They are also interested in the meanings that individuals attach to their own actions and to the actions of others. Interactionist theorists are heavily indebted to the work of Max Weber.

31 Interactionists are particularly interested in the role that symbols play in our daily lives. A symbol is anything that represents something else. In order for something to be a symbol, however, members of society must agree on the meaning that is attached to it. Such things as physical objects, gestures, words, and events can serve as symbols. The American flag, the bald eagle, Fourth of July celebrations, and Uncle Sam are examples of symbols used to represent the US. In the case of gesture, a salute is a sign of respect for authority. 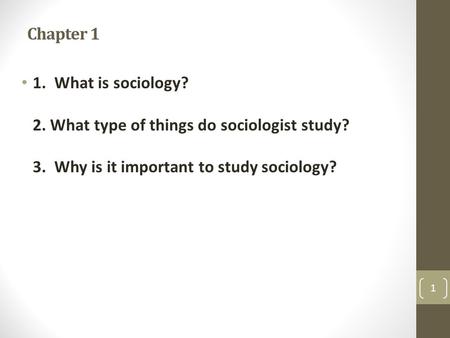 Chapter 1 1. What is sociology? 2. What type of things do sociologist study? 3. Why is it important to study sociology?