2 A New System of Rule With attacks by Vikings, Muslims, and Magyars, kings could not always maintain law and order People had to defend their homes and lands Feudalism Powerful lords gave fiefs to vassals estate Lord granted land in exchange for service and loyalty to a greater lord

5 Lords, Vassals, and Knights
Monarch Dukes Vassal Counts How many of you have a friend who may not like another friend of yours? Problems arose if a vassal pledged his loyalty to more than one lord

9 Independent Practice:
Write and explain: How is the game of capture the flag like a medieval war? Write (1 min.) Explain (1 min.)

11 Castles Early Middle Ages lords would leave their homes during an attack Wooden tower surrounded by a fence with a moat 1100’s Stone castles with a moat and a drawbridge Point of war would be to seize a castle Food and water were stored up in the castle If someone could not be starved into surrender, they could try to tunnel their way under

12 Role of noblewomen “lord of the manor” when man was away at war
Supervise vassals, manage house, farm, and medical duties Maybe even fight for estate on her own Some got involved in politics Eleanor of Aquitaine became queen of France and England Had a hand in European affairs for 70 years

13 Sons usually got the family land
Women did get some as part of dowry If husband died, woman regained land rights Girls were often sent to friends or relatives for training Had to know how to spin, weave, supervise servants Some learned reading and writing Bear many children and be a good wife

14 Chivalry Code of conduct for knights during the middle ages
Brave, loyal, and true to their word Fight fairly and be generous to enemies *Only applied to nobles, not commoners Women were to be protected and cherished Troubadours Wandering poets Chivalry became modern idea of romantic love

19 Celebrations Marriages and Births Christmas and Easter
Week off from work Other Christian Holidays Celebrate by: Killing an animal and eating meat Dancing Sports

21 Word Definition Vassal A. Noble who served as a mounted warrior 2. Fief B. Wandering poet 3. Knight C. Cod of conduct for knights during the Middle Ages 4. Chivalry D. Peasant bound to the Lord’s land 5. Troubadour E. An estate granted by a lord to a vassal in exchange for service and loyalty 6. Manor F. lord’s estate. One or more villages and surrounding land 7. Serf G. Lord who was granted land in exchange for service and loyalty to a greater lord Independent Practice Match the vocabulary word with the proper definition. Answers: G E A C B F D

22 Before and After Journal
Pretend you are a peasant living in the middle ages Write a journal what life would be like, not only for you, but for Monarchs, Lords, and Knights as well 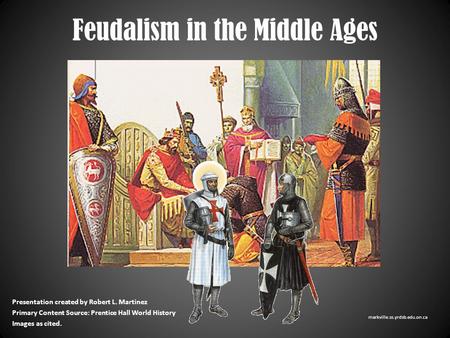 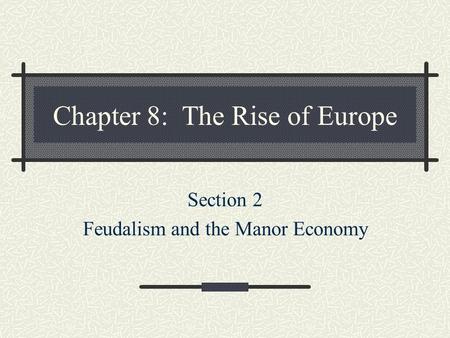