3 The Feudal System Origins of Feudalism Knights and Lords
Knights like William Marshal did not exist at the beginning of the Middle Ages but began to emerge as the period progressed. Feudalism originated partly as result of Viking, Magyar, Muslim invasions Kings unable to defend their lands, lands of their nobles Nobles had to find way to defend own lands Built castles, often on hills Not elaborate structures; built of wood, used as place of shelter in case of attack Origins of Feudalism Nobles needed trained soldiers to defend castles Knights most important, highly skilled soldiers Mounted knights in heavy armor best defenders Being a knight expensive; had to maintain weapons, armor, horses Knights demanded payment for services Knights and Lords

5 Feudal Obligations Oath of Fealty Financial Obligations
Lords, vassals in feudal system had duties to fulfill to one another Knight’s chief duty as vassal to provide military service to his lord Had to promise to remain loyal; promise called oath of fealty Financial Obligations Knight had certain financial obligations to lord Knight obligated to pay ransom for lord’s release if captured in battle Gave money to lord on special occasions, such as knighting of son Lord’s Obligations Lord had to treat knights fairly, not demanding too much time, money Had to protect knight if attacked by enemies Had to act as judge in disputes between knights

7 A Complicated System Lord and Vassal Fealty to King
Europe’s feudal system incredibly complex Person could be both lord, vassal Some knights with large fiefs gave small pieces of land to other knights, created many levels of obligations One knight could serve many lords; no prohibition against knight accepting fiefs from more than one noble Lord and Vassal Almost everyone in system served more than one lord Theoretically, everyone supposed to be loyal to the king In practice, not everyone loyal Some powerful nobles as strong as kings they were supposed to serve, ignored duties as vassals Feudal rules specific to time, place; could change over time; England’s rules not same as France’s rules Fealty to King

9 Lords, Peasants, and Serfs
The Manorial System The feudal system was a political and social system. A related system governed medieval economics. This system was called the manorial system because it was built around large estates called manors. Manors owned by wealthy lords, knights Peasants farmed manor fields Were given protection, plots of land to cultivate for selves Lords, Peasants, and Serfs Most peasants on farm were serfs, tied to manor Not slaves, could not be sold away from manor But could not leave, marry without lord’s permission Serfdom Manors had some free people who rented land from lord Others included landowning peasants, skilled workers like blacksmiths, millers Also had a priest for spiritual needs Free People

12 Daily Life in the Middle Ages
Life in a Castle Life in Middle Ages not easy, did not have comforts we have today Early castles built for defense not comfort Few windows, stuffy in summer, cold in winter, dark always Space Nobles had to share space with others, including soldiers, servants Private rooms very rare Main room the hall, large room for dining, entertaining Bedrooms In early castles, noble family bedrooms separated from main area by sheets Later castles had separate bedrooms; latrines near bedrooms Wooden bathtub outside in warm weather, inside near fireplace in winter

13 Life in a Village Despite discomforts, life in a castle was preferable to life in a village. The typical village family lived in a small wooden one-room house. The roof was made of straw, the floor of dirt, and the furniture of rough wood. Open holes in the walls served as windows. Most families slept on beds of straw on floor All shared one room with each other, animals Most glad to have animals to provide extra heat in cold winters Bedrooms Peasant families cooked meals over open fire in middle of floor Typical meal: brown bread, cheese, vegetables, occasionally meat No chimneys, house often full of smoke; fires common Meals The family rose before dawn. Men went to work in the fields; women did chores. During harvest, the entire family worked in the field all day. 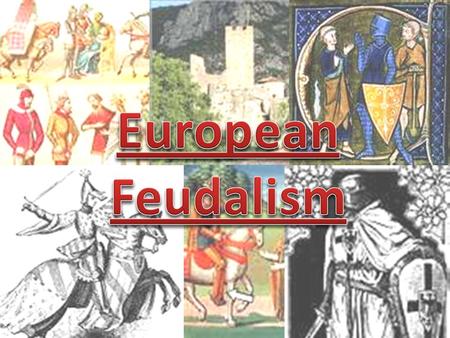 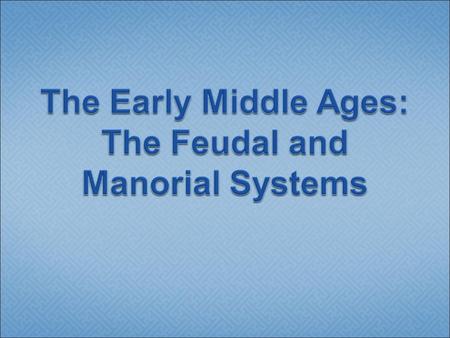 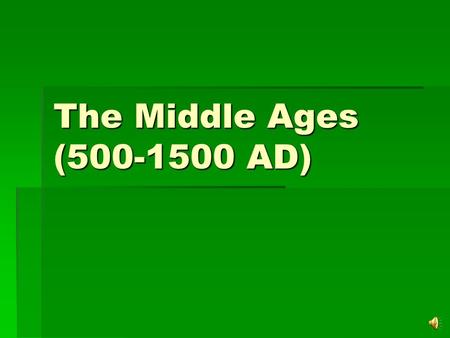 The Middle Ages ( AD) I. Successors to Rome: “Shadows of the Empire” 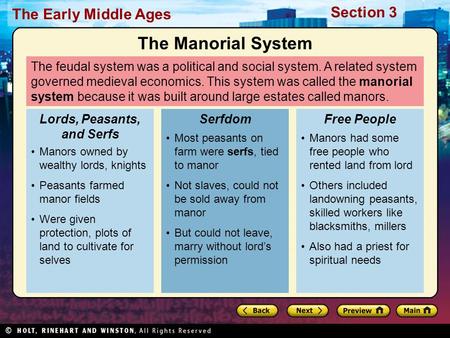 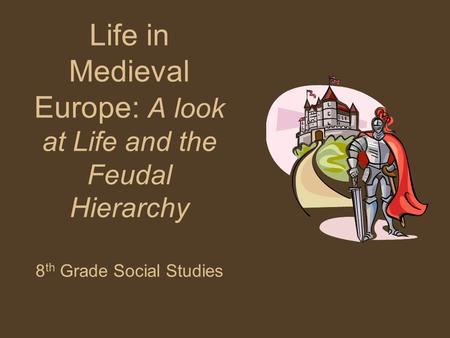 Life in Medieval Europe: A look at Life and the Feudal Hierarchy 8 th Grade Social Studies.