5 Muslim Empire Islam formed in 600s Move across the Middle East, N. Africa, and into Spain

7 Charles the Great “Charlemagne” Takes the throne in 768 Ruled the empire built by his grandfather, Charles Martel Fought: Muslims in Spain, Saxons in the North, Avars and Slavs in the East, and Lombards in Italy

11 Legacy of Charlemagne Died in 814 Son, Louis I rules –Grandsons fight over and divide the empire with the Treaty of Verdun Known for: –Extending Christianity –Set up a strong, efficient government

13 Feudalism Def. – a loosely organized system of rule in which powerful local lords divided their landholdings among lesser lords known as vassals –Land is exchanged for military service Feudal contract – exchange of pledges Fief – estate that may include peasants Liege lord – 1 st lord

16 Knights and Nobles Knight – a mounted warrior Sent at age 7 to father’s lord’s castle –Learn to ride and fight –Learn to maintain armor and weapons Fight with swords, axes, and lances while on horseback –Strict discipline –Laziness was beat out –Dubbed a knight at conclusion of training 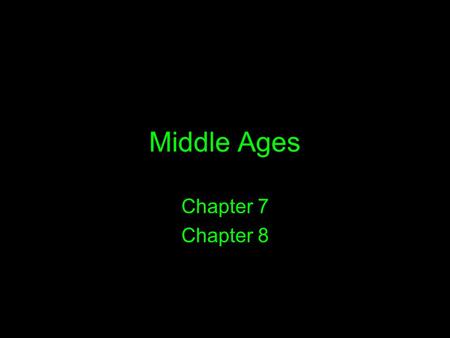