2 Independent Clause Independent clauses (also called the main clause). They contain a subject and express a complete thought. Every sentence has at least ONE independent clause. They can stand alone. Example: The girl skipped. Subject Verb

4 Dependent clauses Dependent clauses are also called subordinate clauses and they can’t stand alone. These are the ones that start with relative pronouns or subordinating conjunctions. They only make sense when attached to the main clause. Example: After she presented her paper. While the group studied. Subject Verb

6 Common subordinating conjunctions? After Sure Before While Because Although So That If When Whenever As Even though Until Unless As if Although As if Since Where Whenever While Though

8 Example Jim Studied in the Sweet Shop for his chemistry quiz, BUT it was hard to concentrate because of the noise.

10 Examples Put the luggage where you find an empty spot. The game will begin after we sing the National Anthem. Amy spoke as if she were very serious. I am tired because I have been working all day.

13 Adjective dependent clause Starts with a relative pronoun. It is also usually the subject of the clause. They can also begin with where or when. They act like an adjective

15 Adjective Dependent Clause The professor whom I had asked for help met with me before class. 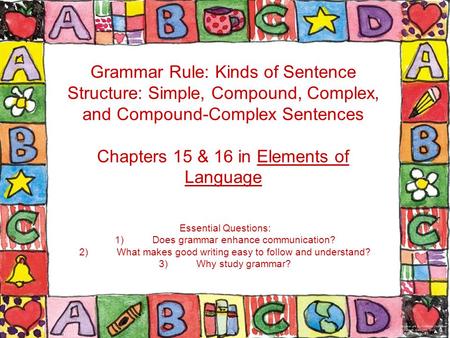