Presentation on theme: "MENTAL DISORDERS. What is a Mental Disorder?  Mental disorder- illness that affects the mind and reduces a persons ability to function, to adjust to."— Presentation transcript:

3 Recognizing Mental Disorders  Abnormal thoughts, feelings, or behaviors are signs/symptoms of a mental disorder  Behaviors that are highly unusual (i.e. washing your hands over and over if already clean)

7 Early Experiences  Negative Experiences that occur early on in life  Ex. Neglected child; child that is abused in any way

8 Recent Experiences  Experts believe that recent experiences are more likely than early experiences to trigger a mental disorders  Ex. Death of a loved one

9 ADHD  Attention-Deficit/Hyperactivity Disorder  Difficulty in school, home, social settings  When treated with medication, the results are immediate and dramatic  Remember: Just because someone has trouble sitting still or paying attention from time to time doesn’t mean they have ADHD

11 Anxiety Disorders  Anxiety: fear caused by a source that you cannot identify or a source that doesn’t pose as much threat as you think  Feelings are usually normal and short- lived  ex: anxious before a final, school dance, tryouts

16 Anxiety Disorders: Obsessive Compulsive Disorder (OCD)  Obsession: an unwanted thought or image that takes control of the mind  Compulsion: unreasonable need to behave in a certain way to prevent a feared outcome  Ex: constantly brushing teeth, checking to see if the door is locked, checking the stove

18 Other Mental Disorders: Mood Disorders -Experience extreme emotions that make it difficult to function well -Ex. Bipolar: shift from one emotion extreme to another (manic to depressive) -Depression: emotional state in which a person feels extremely sad and hopeless

19 Other Mental Disorders: Schizophrenia  Schizophrenia: severe disturbances in thinking, mood, awareness, and behavior  “ split-mind”- peoples minds are “split-off” or separated from reality  Rarely harmful to others  At times appear normal; at times talk to themselves, display inappropriate dress, act strangely, withdraw from others  Develop fears that are not supported by reality

20 Other Mental Disorders: Impulse Control Disorders  Cannot resist impulse or the drive to act in a way that is harmful to themselves or to others (ex. Kleptomania, gambling, uncontrolled shopping)  Interferes with work, school, family, relationships, finances

21 Other Mental Disorders: Personality Disorders  Display rigid patterns of behavior that make it difficult to get along with others  Falls into three broad groups:  Group A  Group B  Group C

Download ppt "MENTAL DISORDERS. What is a Mental Disorder?  Mental disorder- illness that affects the mind and reduces a persons ability to function, to adjust to." 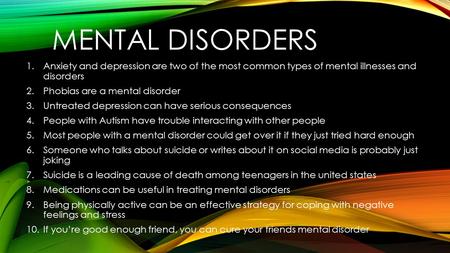