3 Phonetics and phonology
study the sound systems of languages … . While phonetics studies ALL possible sounds that the human vocal apparatus can make, phonology studies only those contrasts in sound which make differences in meaning within language. Examples of phonemic contrasts: thin / tin /sin, think /sink = minimal pairs (word pairs that differ only in one phoneme)

5 Phoneme – Phone – Allophone: the case of /l/
Let a million people have milk /l/ is articulated in different ways in these words, but all these versions belong together in ONE English phoneme. They are allophones (dark and clear, or light /l/) of that phoneme.

6 Phoneme – Phone – Allophone
Phoneme = a basic unit of which words are composed. It functions contrastively and is an abstract unit, a sound-type ”in the mind” Phones are all the different versions of a phoneme produced in actual speech Allophones are a set of phones, all of which are versions of a single phoneme

7 Classification of phonemes
The articulatory classification Consonants are articulated via obstruction in vocal tract. Tongue and other parts of mouth constrict shape of oral cavity through which air is passing. Vowels are produced by a relatively free flow of air. Tongue influances shape through which air passes, which results in different vowel sounds. Vowels tend to be more unstable and variable, and change more rapidly over time.

14 Front Mutation (i-umlaut)
Regressive distant assimilation = a change of a back vowel to the associated front vowel or or a front vowel becomes closer to /j/ when the following syllable contains /i/, /iː/, or /j/ Proto-Germanic *fot- *fot-iz German Fuss, Füsse Swedish fot, fötter English foot, feet 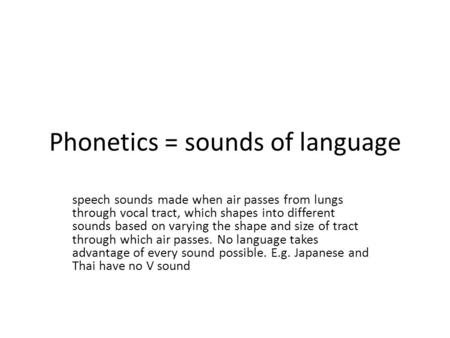