3 2.2 Phonetics 2.2.1 What is phonetics? Phonetics is the study of the phonic medium of language; it is concerned with all the sounds that occur in the world’s languages.

4 Phonetics looks at speech sounds from three distinct but related points of view:
From the speaker’s point of view: how a speaker uses his speech organs to articulate the sounds, which results in articulatory phonetics.

5 From the hearer’s point of view:
how the sounds are perceived by the hearer, which results in auditory phonetics.

6 From the way sounds travel:how sounds travel by looking at the sound saves, the physical means by which sounds are transmitted through the air from one person to another, which results in acoustic phonetics.

7 By studying sound waves with the help of spectrographs, acoustic phoneticians find that the same sounds we claim to have heard are in most cases only phonetically similar, but rarely phonetically identical.

9 The pharyngeal cavity:
Vibration of the vocal cords results in a quality of speech sounds called voicing, which is a feature of all vowels and some consonants in English.

10 When the vocal cords are drawn wide apart, letting air go through without causing vibration, the sounds produced in such a condition are voiceless.

12 The nasal cavity The nasal cavity is connected with the oral cavity. The soft part of the roof of the mouth, the velum, can be drawn back to close the passage so that all air exiting from the lungs can only go through the mouth. The sounds produced in this condition are not nasalized.

13 If the passage is left open to allow air to exit through the nose, the sounds produced are nasalized sounds.

15 The distinction between / ph / and /p/ does not make a difference between words in English. If we substitute /p/ for /ph/ in /phin/ we produce a peculiar pronunciation of pin but not a new word;

16 But the substitution of p for t does make a difference of word: pin/pin/ and tin/tin/ are different words in English.

19 The speech sounds in the English language can be divided into vowels and consonants. The basic difference between a vowel and a consonant is that in the pronunciation of the former the air that comes from the lungs meets with no obstruction of any kind in the throat, the nose, or the mouth, while in that of the latter it is obstructed in one way or an­other.

21 In terms of manner of articulation:
stops: When the obstruction created by the speech organs is total or complete, the speech sound produced with the obstruction audibly released and the air passing out again is called a stop or a plosive.

23 fricatives: When the obstruction is partial and the air is forced through a narrow passage in the mouth so as to cause definite local friction at the point, the speech sound thus produced is a fricative.

25 Affricates: When the obstruction, complete at first, is released slowly with the friction resulting from partial obstruction (as in fricatives), the sounds thus produced are affricates. In English there are two affricates [ʧ] and [ʤ].

26 Liquids: When the airflow is obstructed but is allowed to escape through the passage between part or parts of the tongue (the tip or the sides ) and the roof of the mouth, the sounds thus produced are called liquids.

28 In the production of the other liquid [r], the tip of the tongue is curled back and the air passes over it. It is also called "retroflex."

29 Nasals: When the nasal passage is opened by lowering the soft palate at the back of the mouth and air is allowed to pass through it, the sounds thus produced are called nasals. There are three nasals in English [ m ] [ n ] and [ŋ].

31 In terms of place of articulation:
bilabial: In the production of these sounds, the upper and the lower lips are brought together to create obstruction. The English bilabials are [p] [b] [m] [w].

32 labiodental: In the production of these sounds, the lower lip is brought into contact with the upper teeth, thus creat­ing the obstruction. The labiodental sounds in Eng­lish are [f] and [v].

33 dental: The obstruction is created between the tip of the tongue and the upper teeth. There are two dental sounds in English.

35 palatal: The obstruction is between the back of the tongue and the hard palate.

36 velar: The back of the tongue is brought into contact with the velum, or the soft palate. The sounds thus pro­duced in English are [k] [g] and [ŋ].

37 glottal: The vocal cords are brought momentarily together to create the obstruction. There is only one glottal sound in English, i.e.[h]. 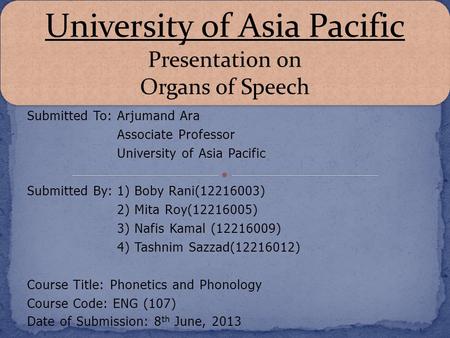