Presentation on theme: "South Africa, Kenya, & Nigeria. By the 20 th century, European powers had colonized the majority of Africa. The only independent countries were Liberia."— Presentation transcript:

3 By the 20 th century, European powers had colonized the majority of Africa. The only independent countries were Liberia and Ethiopia. Liberia was founded in 1822 by former American slaves. Nationalism, a feeling of strong pride for one’s country, fed the desire for independence from foreign rule. Africans wanted to take control of their own governments and natural resources.

4 Africa began to change by the 1940s. The rule of tribal chiefs had weakened because of their links with colonial governments, thus limiting their ability to control people. An educated middle class that disliked colonial life began to grow in the cities. The cost for European countries to maintain colonies was rising. By the second half of the century, unrest arose throughout the continent and African nations fought to free themselves from European control.

6 In the 1600s, the British and the Dutch colonized South Africa. More European settlers came to South Africa than to anywhere else on the continent. In 1910, Great Britain established the Union of South Africa, and power was only given to whites. In 1948, a new political party, the National Party, came to power and enforced the policy of apartheid through legislation across South Africa. Apartheid was a system of racial segregation.

8 Apartheid allowed many Europeans to grow wealthy and powerful, while millions of South Africans suffered. In 1951, European government officials created the Bantu Authorities Act, which created “homelands” for black South Africans. At this time, whites owned 80% of the land, although they only represented 10% of the population. As a result of this law, 9 million South Africans were excluded from participating in the government.

14 For hundreds of years, outsiders did not enter the region now known as Kenya because of the fierce warrior tribes that inhabited the area. Arab traders took control of Kenya’s coast during the 1800s. Next came Germany and Great Britain, but by the 1900s, the British were the only foreigners who remained.

15 Most Kenyans were upset by their loss of rights as landowners to the British. They believed that their land was taken unfairly and opposition groups began to form in the 1920s. For several decades, small bands of armed resistance forces (guerillas) fought to eliminate white settlers in Kenya, as well as any Africans who sided with them. In 1956, there was a violent rebellion that resulted in the deaths of tens of thousands of Africans. Although the British army mostly defeated the guerillas, this movement gained a great deal support among Kenyans.

16 The Mau Mau was a secret society that believed force was the only way to win Kenyan rights and independence.

17 Kenyans were tired of being treated unfairly, and it was time for a change. Great Britain began to rethinking its policy on colonization, and on December 12 th, 1963, the British Empire granted Kenya its independence. Jomo Kenyatta was the most influential leader of the freedom movement in Kenya, and was appointed as the nation’s first president.

19 Kenyatta was a leader of the Kenyan African National Union, and during his presidency, began a campaign called harambee, which is Swahili for “let’s pull together.” Under Kenyatta and his successor, Daniel arap Moi, the KNAU ran unopposed in elections until the 1990s. The country remains a multi-party state, but the reality is that the KNAU is in control of the government. By the time of his death in 1978, Kenyatta had helped Kenya become one of the most stable and economically dynamic countries in Africa. Even though there has been improvement in the political rights of Kenya’s people, more is still needed.

20 Jomo Kenyatta -- The first president and “founding father” of Kenya.

23 The country now known as Nigeria was a diverse region with more than 250 ethnic groups. Nigeria had maintained its independence until 1914 when Great Britain took over the area. By the end of World War II, Nigerians had started political parties to work for Nigerian independence. Most Nigerians believed that the only way to have rights was to be completely free of European rule.

24 During the 1950s, Great Britain allowed Nigeria to elect its own government. In 1957, Nigerians elected Abubakar Tafawa Balewa as their first prime minister. On October 1 st, 1960, Great Britain granted Nigeria independence and an independent government was established. At first, it was one of the most stable governments of the new African countries.

25 Abubakar Tafawa Balewa – Nigeria’s first prime minister. He was overthrown and murdered in a military coup in 1966.

26 At first, Nigeria was one of the more stable governments in Africa. Unfortunately, struggles for power have resulted in many military coups in the country. Nigeria suffered from violence and military rule from 1966 until 1999, when a democratic government was established. In recent years, political instability, religious competition, ethnic differences and the need to become more modern continue to plague Nigeria.

28 By 1966, all but six African countries were independent nation-states. Unfortunately, once the countries were independent of European rule, they still faced many challenges. Many of the new governments were politically unstable. European powers did not teach new leaders how to govern. In some African countries, military dictators took over the governments.

30 Credits: Images were found via Creative Commons and labeled for reuse. Fonts: Backgrounds & Graphics: *The graphics used in this item are copyrighted and may not be used for your own commercial projects or given away to anyone else.

Download ppt "South Africa, Kenya, & Nigeria. By the 20 th century, European powers had colonized the majority of Africa. The only independent countries were Liberia." 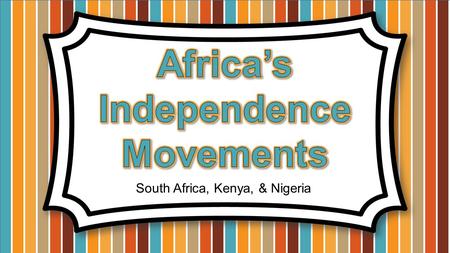