Presentation on theme: "Wrapping It All Up.  Although Kenya is a republic, individual states are more tightly controlled by the central government than states in the United."— Presentation transcript:

1 Wrapping It All Up

2  Although Kenya is a republic, individual states are more tightly controlled by the central government than states in the United States. Kenya had a presidential form of democracy until the election of 2007. After much violence and negotiation, the position of prime minister was established. The new system requires an unusual power-sharing agreement between the president and the prime minister. The president is the chief of state and the prime minister is the head of government. There are over 10 political parties, but most fall into two of the coalition parties that participate in the power-sharing agreement. All citizens 18 and over may vote in elections.

4  The U.S. Government officially recognizes the government of Sudan as a Government of National Unity under a 2005 peace agreement meant to reduce violence and bring political stability to the nation. This agreement outlined a power sharing deal between the two major political parties in the country. This government was designed as a transitional authority leading up to free and fair elections in 2009. Unofficially, the current president of Sudan is considered a dictator. The International Criminal Court has issued a warrant for his arrest. The president ejected foreign aid groups in March 2009, creating a humanitarian crisis for millions of Sudanese.

6  Much of the colonial conflict in South Africa occurred between the British and the settlers of Dutch, German, and French origin who preceded the British. Eventually, the British Empire was able to consolidate power over this group and established the Union of South Africa in 1910. At this time, all power remained in the hands of white South Africans under British rule. In 1912, the African National Congress was established.

7  This group would fight for the rights of black and “colored” people in South Africa from 1912 through the end of Apartheid and the election of Nelson Mandela in 1994. It is important for students to understand that the independence of South Africa from the British Empire was established by the white minority in 1961. Their decision to declare themselves a republic was driven by their desire to maintain the system of Apartheid.

8  The nationalist movement in South Africa did not achieve independence from a colonial power; rather, it defeated the Apartheid system and established equal rights for black and “colored” South Africans.

9  Although there was a European presence in this part of Africa as early as 1498, Kenya did not become an official British colony until 1920. Black people in the colony were denied a role in politics until 1944, when a few black people were allowed to run and hold office. In the 1950s, there was a violent, seven year uprising resulting in the deaths of tens of thousands of black Kenyans. Black participation in government increased steadily during this period, and Kenya became an independent nation in 1963.

10  British influence in Nigeria began in 1885 and the territory officially became a British colony in 1914. A largely peaceful nationalist movement in Nigeria led the British to move Nigeria gradually toward independence between 1945 and 1960. Final independence was achieved in 1960. Unfortunately, economic development by the British during the colonial period was unequally distributed in the territory that became the country of Nigeria. This allowed some of the ethnic groups in the country to have greater wealth and power than other ethnic groups. The inequities and ethnic tensions caused multiple coups throughout the 60s, 70s, 80s, and 90s.

11  The Pan-African movement began in the late 1800s as a philosophy emphasizing the common bond shared by people of African descent and advocating unity among African people. It is sometimes applied to black Africans, to all black people throughout the world, and/or to all people living on the African continent.

12  From 1900 to 1945, most Pan-Africanists, with the notable exception of Marcus Garvey, were black intellectuals from the United States, the Caribbean, and Europe or affluent black Africans studying abroad in Europe and the Americas. After WWII, these young black leaders began to organize influential groups of black Africans. Some of the groups attending Pan-African conferences in Europe developed nationalist movements in their colonies and fought for independence.

13  Some of the most influential Pan-Africanists rose to become president of newly independent African countries. This is true for Kenyatta in Kenya and Nkrumah in Ghana. The Pan- African movement led to the development of a loose organization of African states known as the African Union.

Download ppt "Wrapping It All Up.  Although Kenya is a republic, individual states are more tightly controlled by the central government than states in the United." 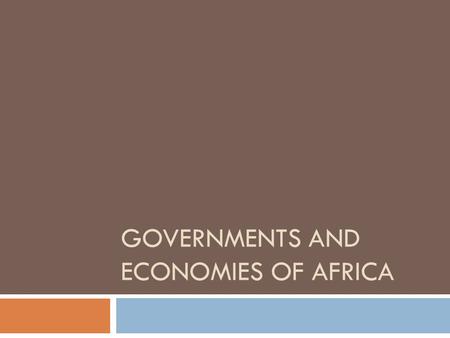 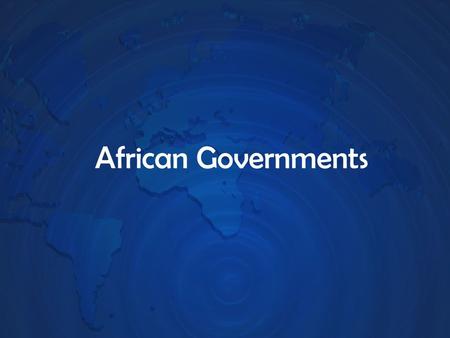 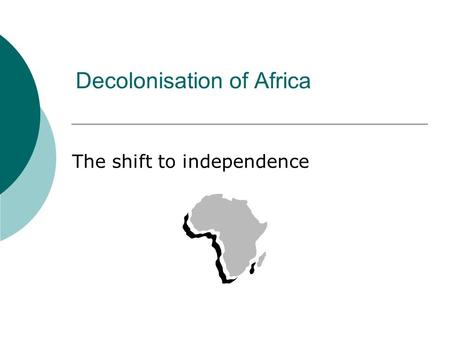 Decolonisation of Africa The shift to independence. 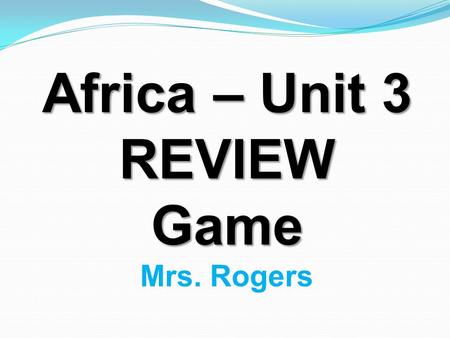