Presentation on theme: "From Democracy to the Dark Ages. Democracy 1 st practiced by the Greeks Main idea of democracy: –All people have rights –Limits on government power Direct."— Presentation transcript:

1 From Democracy to the Dark Ages

4 The fall of Rome in 476 A.D. altered the map of Europe. The once great empire was replaced by hundreds of little kingdoms.

5 Collapse of Central Government During the Roman Empire, there was a central government. It made laws and had armies to protect people. However, with the fall of Rome, the central government collapsed. Hundreds of little kingdoms governed in its place.

6 After the fall of Rome, the empire was divided among the various Barbarian tribes.

7 Increased Warfare The new kingdoms frequently fought in an attempt to acquire more land. This frightened people and encouraged people to think of new ways of protecting themselves. New political and economic systems developed.

8 Feudalism and Manorialism In this lesson, students will be able to define and explain the following terms: Feudalism Manorialism Lords Vassals Serfs Fiefs

9 The Early Middle Ages was a dangerous time.

11 It was a dangerous time to be a peasant. Poor people turned to rich landowners with armies for protection.

13 People who owned land were called lords. Lords gave land to lesser lords called vassals. A vassal had to obey his lord and give military service and loyalty to his lord.

14 Feudalism Feudalism was the political and military system of the Middle Ages. In a feudal society, land is exchanged for military service and loyalty. The ownership of land was the basis or power.

15 A fief was all of the Lord’s land. The manor was part of the fief where the peasants farmed and the people lived.

16 Manorialism Manorialism was the economic system of the Middle Ages. Manorialism is a self-sufficient economy. Everything that is necessary for life is created on the manor. (They take care of themselves.)

18 Questions for Reflection: Why did peasants need protection after the fall of Rome? Why were serfs willing to offer their labor to lords? What was the relationship between lords and vassals? Define feudalism and manorialism. How does manorialism differ from our economic system?

Download ppt "From Democracy to the Dark Ages. Democracy 1 st practiced by the Greeks Main idea of democracy: –All people have rights –Limits on government power Direct." 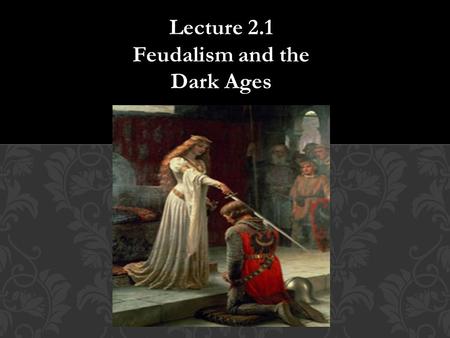