2 I. The Geography of Europe
After Rome’s Fall (A.D. 476), Western Europe was divided into many kingdoms. Europe is a continent, but it is also a peninsula made up of smaller peninsula. Easy access to water help the European economy. Rivers made it easy for people to travel within Europe. Seas and Rivers offered Europe protection from enemies. Also allowed different cultures to develop because of separation. Europe contains many mountain ranges that made it difficult for one group to rule all of Europe.

4 II. The Germanic Kingdoms
The Visigoths in Spain and the Ostrogoths in Italy adopted Roman ways because they were close to the center of the old Roman Empire. In the 400s, the Angles and Saxons invaded Britain from Denmark and Germany and became the Anglo-Saxons. The Celts who had been living in Britain fled north and west. The Franks were a Germanic people living in the area that is now France. Clovis was king of the Franks who became a Catholic. Much of his kingdom became Catholic.

5 After Clovis’ death, fights broke out over land, and nobles called mayors settled disputes, gave out land, and fought each other. Charles Martel was a Frankish mayor who wanted to control all the nobles. The Catholic Church supported Martel

6 Muslims conquered Spain in A. D
Muslims conquered Spain in A.D. 711 and threatened to spread Islam throughout Europe. In A.D. 732, Martel and the Franks defeated the Muslims, and Christianity remained Europe’s major religion. Pepin, Charles Martel’s son, defeated the Lombards. He gave all the conquered land to the pope. It became the Papal States. Pepin’s son was Charles. He defended the pope and conquered Germany and Spain. His Empire covered most of Europe. He earned the name Charlemagne. The pope crowned him the new Roman emperor. Aachen was the capital of Charlemagne’s empire. Charlemagne promoted education.

7 After Charlemagne’s death, his son divided the empire into three kingdoms. They were weak.
Scandinavia was the home of the Vikings Vikings raided Europe and conquered western France (Normandy).

8 The three kingdoms of France (Franks) were destroyed by raids, and the eastern kingdom became Germany. Otto I was a powerful German king who fought the Magyars and protected the pope. Territory became known as the Holy Roman Empire.

9 III. The Rise of the Catholic Church
Gregory the Great was pope from Asked monks to become missionaries Monks and monasteries – important role for the education, health and knowledge and later politics 1073 – Gregory VII became pope. He issued a decree forbidding kings from appointing high ranking church officials. 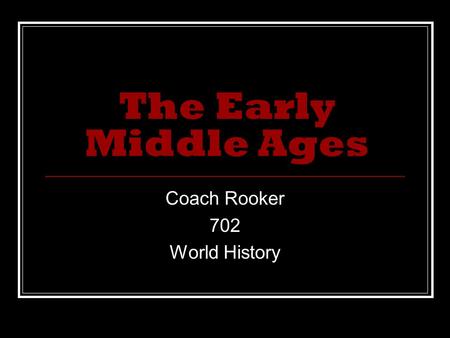 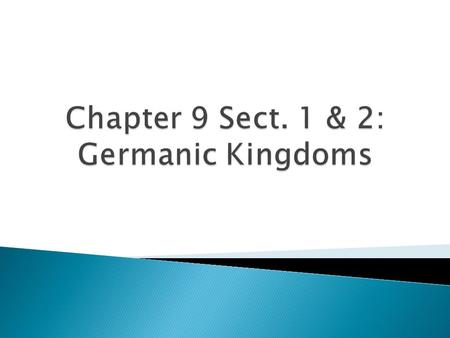 Outside Invaders Visigoths had taken over Italy Ostrogoths took over Italy after the Visigoths Germanic Angles & Saxons moved to Britain Later becoming.