Presentation on theme: "The crusades A series of attempts to gain Christian control of the Holy land."— Presentation transcript:

1 The crusades A series of attempts to gain Christian control of the Holy land.

2 The Crusades were a long series of wars between Christians and Muslims in Southwest Asia. The goal of the Crusades was simply to take back the Holy land. Holy land: Jerusalem and the area around it. It is holy to all 3 major monotheistic religions. Late 1000’s Jerusalem had fallen to Muslim control. North African Muslims called the Fatimids. Stories started to circulate the Muslims were persecuting Christians. Council of Clermont: Pope Urban calls for a meeting in Clermont France. The Pope calls on all Christians to unite and put aside differences. Pope Urban II called on Christians to retake the Holy Land. Five thousand men came to fight and sewed crosses on their clothing to show that they were fighting for God. First wave were peasant warriors who were easily destroyed. The word crusade comes from the Latin for “marked with a cross.”

4 The Crusades The First and Second Crusades Pope promises Crusaders who die a place in heaven First Crusade: three armies gather at Constantinople in 1097 Crusaders capture Jerusalem in 1099 Captured lands along coast divided into four Crusader states Muslims take back Edessa in 1144; Second Crusade fails to retake it In 1187 Saladin—Muslim leader and Kurdish warrior—retakes Jerusalem

5 NEXT The Crusades The Third Crusade Third Crusade led by three powerful rulers One is Richard the Lion-Hearted—king of England Phillip II of France abandons Crusade after arguing with Richard. Frederick I of Germany drowns during the journey In 1192 Richard and Saladin make peace after many battles. Saladin keeps Jerusalem but allows Christian pilgrims to enter city.

6 NEXT The Crusading Spirit Dwindles Later Crusades Fourth Crusade: Crusaders loot Constantinople in 1204 Two other Crusades strike Egypt, but fail to weaken Muslims The Children’s Crusade In 1212 thousands of children die or are enslaved in failed crusade A Spanish Crusade Most of Spain controlled by Moors, a Muslim people Christians fight Reconquista—drive Muslims from Spain, 1100 to 1492 Spain has Inquisition—court to suppress heresy; expels non-Christians

7 NEXT The Effects of the Crusades The Crusades Change Life Crusades show power of Church in convincing thousands to fight. Women who stay home manage the estate and business affairs. Merchants expand trade, bring back many goods from Southwest Asia. Failure of later crusades weakens pope and nobles, strengthens kings. Crusades create lasting bitterness between Muslims and Christians. Economic changes: The Crusades enhanced existing trade. Crusaders brought more goods such as spices, textiles back to Europe. Political Change: Kings become more powerful because they take over lands of the dead Nobles and Knights. Social Changes: Brought knowledge of Muslim culture to Europe. Also resulted in a greater intolerance and discrimination against non- Christians.

Download ppt "The crusades A series of attempts to gain Christian control of the Holy land." 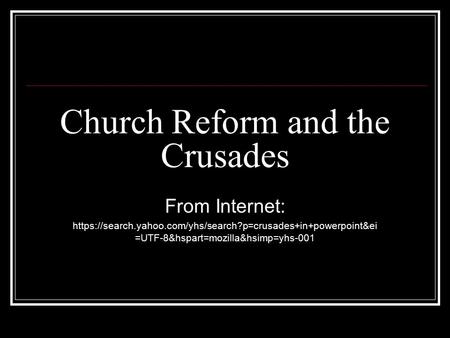