Presentation on theme: "Three Chinese Philosophies The Zhou dynasty lasted from 1045 B.C.E to 256 B.C.E. and different leaders fought for control in China. It made Chinese thinkers."— Presentation transcript:

2 Three Chinese Philosophies The Zhou dynasty lasted from 1045 B.C.E to 256 B.C.E. and different leaders fought for control in China. It made Chinese thinkers ask questions about the best way to have peace and order in a society. The Chinese came up with the philosophies of Confucianism, Daoism, and Legalism.

3 The Zhou Dynasty The Zhou dynasty, a group from the Northwest, moved into the central plains and overthrew the Shang Dynasty. To justify the conquest over the Shang, the Zhou claimed they had been given the Mandate of heaven, a divine right to rule China.

4 The Zhou Dynasty According to this belief, Heaven was a power that controlled human destiny. The king was the son of heaven and as long as he governed well, heaven gave him the right to rule. If the king didn’t govern well, Heaven would send him signs of displeasure, such as earthquakes and floods

5 The Zhou Dynasty Using a system of feudalism, the Zhou increased the stability of the government. Under feudalism, the king owned all the land. He gave large pieces of land to loyal supporters called lords. In exchange these lords sent soldiers to fight enemies who threatened their king. The lords had absolute power in their land and peasants farmers worked their lands and raised crops in exchange for protection

6 The Zhou Dynasty The Feudalism system worked in China for a time, but the lords became more ambitious. Groups throughout China eventually grouped into six or seven states and fought for power. These wars brought disorder all across China for 250 years and are known as the Warring States period.

7 Confucianism Confucianism is based on the teaching of Kongfuzi, who is called Confucius by western society. He experienced first hand the disorder that erupted when lords fought for power. Confucius respected Chinese traditions and wanted to teach men of good character to serve society as honest and fair government officials.

8 Confucianism The goal of Confucianism was to achieve a just and peaceful society. According to Confucianism, there are five basic relationships between people: ruler and subject, husband and wife, father and son, older sibling and younger sibling, and friend and friend.

9 Confucianism All people must respect and obey those that are above them in status. The influence of Confucianism led Han leaders to hire civil servants on the basis of ability. To prove the candidates had this knowledge, they had to take exams that the emperor himself might have to grade.

10 Daoism Daoism was started by a wise man Laozi. Some scholars believe that Laozi was a real man, while others feel that he was merely a legend and that many writers wrote Dao De Jing the basis of Daoism.

11 Daoism Daoism was based on the ancient Chinese idea of the Dao or “the way.” Daoism taught that people gained happiness and peace by living in harmony, or agreement, with the way of nature.

12 Daoism To Daoists nature is full of opposites, like life and death or light and darkness True Harmony comes from balancing the opposite forces of nature called yin and yang.

13 Daoism According to the Daoists the best rulers are the people who ruled least. The Dao De Jing says, “Governing a large country is like frying a small fish. You spoil it with too much poking.” Daoism encouraged rulers to govern less harshly and in time Daoism developed into a popular religion.

14 Legalism Legalism was the last Chinese philosophy and was based on the teachings of Hanfeizi. Hanfeizi lived to see the end of the Warring states period and the Zhou dynasty. His ideas survive today in a book named after him called Hanfeizi.

16 Legalism Legalists believed it was not good enough for rulers to set a good example, they must establish strict laws and enforce them either with rewards for good behavior or with harsh punishments for bad behavior.

17 Legalism People who were caught criticizing the government were banished to the Northern frontier. Hanfeizi taught the rulers that they must have absolute power backed by military might.

Download ppt "Three Chinese Philosophies The Zhou dynasty lasted from 1045 B.C.E to 256 B.C.E. and different leaders fought for control in China. It made Chinese thinkers." 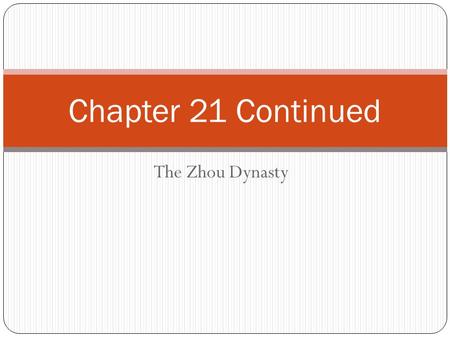 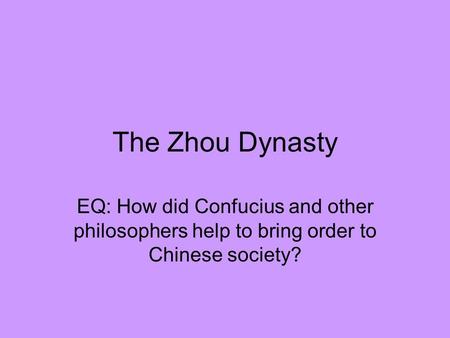