2 Confucianism Who was Confucius ?
Confucius lived from 551 to 479 B.C.E. Confucius’s goal was to be peaceful and just society Confucius wanted to teach men of good character and honesty triblocal.com

4 Confucianism According to Confucius what were the five basic relationships and how should those people act? Ruler and subject Husband and wife Father and son Older sibling and younger sibling Friend and friend All people must respect and listen to the person above them (respect your elders)

7 According to Daoism how should people and rulers behave?
People should live in harmony and agreement and they would gain happiness Rulers should let natural consequences happen suresh-peaceandnature.blogspot.com

9 Legalism Who was Hanfeizi? Founder of Legalism
He lived from 280 to 233 B.C.E He was the prince of royal family of the state of Han english.eastday.com

10 Legalism According to Hanfeizi, what was the only way to create a strong society? They should establish strict laws and enforce them with rewards for good behavior They should have harsh punishment for bad behavior cashinbundles.com 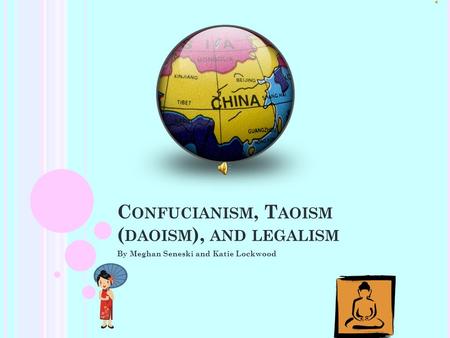