2 Early PC’s were quite simple and had limited memory processor speed and hard drive capacity.
Software for the early PC’s was primitive with primary uses in business being word processing and spreadsheets. The average cost of a PC in 1985 was $7,500. Software would cost significantly more often over $10,000 Early PC’s

3 PC - What is it? PC -stands for Personal Computer
Term is derived from the fact that early computers were massive in size ( filling entire rooms) and were shared among many many people. These big computers were called main frames.

4 PC Hardware vs Software
PC hardware is defined as the physical components you can see and touch. Some hardware is hidden inside the CPU (Central Processing Unit) or are attached to the CPU and called ‘peripherals’

7 Processor The processor or CPU (Central processing unit) controls the entire computer. It sends and receives from the various input and output devices and perform mathematical calculations. Usually called a PROCESSOR CHIP… currently processor chips run at tremendous speeds. Processor speed technology has developed so rapidly that speeds now double about every six months to a year.

8 INTEL Processor Many computers say “Intel Inside”
Intel is the largest and best known maker of processor chips. There are others such as AMD and the Apple POWERPC . The power or speed of a processor is usually measured in GIGAHERTZ (Ghz)

9 MEMORY Memory is where the computer stores instructions or data for current or future use. The more memory you have the better as your computer will run faster if it has more RAM.

10 ROM - Read Only Memory - permanently burned into a chip and cannot be changed ( hence read , only)
RAM - Random Access Memory - this is active memory that can store data , be erased and store data again.

11 RAM - Random Access Memory
Most PC memory used by the CPU processor is RAM. The more RAM your computer has the better and faster it will run. RAM is measured in bytes. Processor RAM used by the processor in the very short term (gone if you turn your PC off!).

12 What is a BIT and BYTE? The computer memory stores numbers and alphabetic characters using bits of memory called ‘BITS’. Each bit can only show two states either a zero or a one state ( 0/1) represented by the bit being turned on or off.

15 Motherboard The CPU and RAM are combined on the main circuit board inside the computer.

16 OUTPUT Besides input , processor and storage components , the PC must have output devices. These devices allow you to see the results of the computer processes. Eg of Output devices are:

17 OUTPUT Monitor : you can see both what you are inputting and computer output. Printers: paper printouts : Inkjet and Laser Speakers Modems - allow your computer to send output to other computers

18 SOFTWARE Can’t touch that!
Software is a set of electronic instructions that tell the hardware what to do. Examples of software are Windows XP and Halo.

22 GIGO Means “ Garbage In Garbage Out”
A computer can only provide good output if it has been given good input. If you put garbage in ( meaningless data) you will get garbage out ( meaningless output) 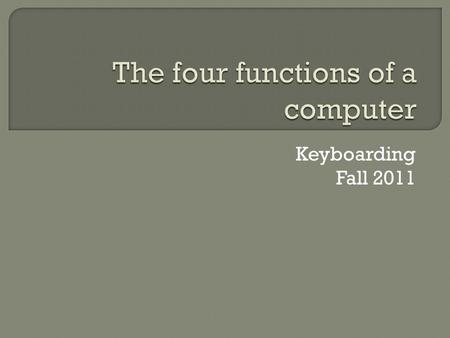 Keyboarding Fall  Hardware is the parts of the computer that you can actually see and touch, such as…… Monitors Mouse Keyboard Ear phones Scanner. 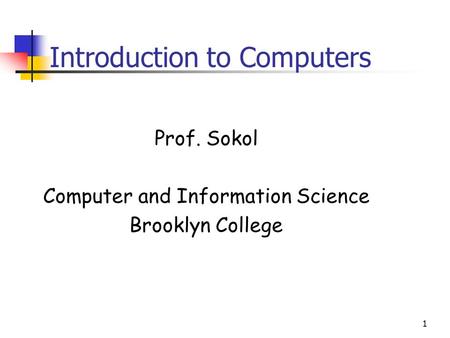 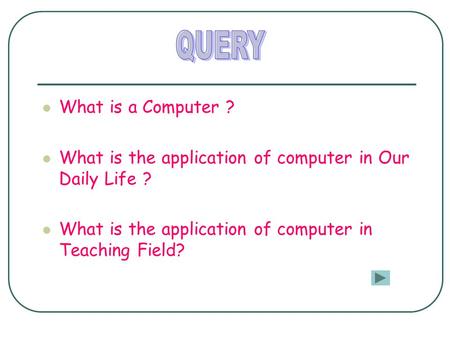