2 What is a computer? A computer is an electronic device that executes the instructions in a program. The computer has four components: Input Storage Processing Output

4 Software Software is a computer program that is made up of certain instructions or codes that tell your hardware, or computer, what to do. Software can be used to play games, write school papers, or even sort . Adobe Reader Excel PowerPoint Word Photoshop Mavis Beacon

5 Operating System (OS) The OS is a large program made up of many smaller programs that control how the CPU communicates with other hardware components. It also makes computers easier to operate by people because it puts a face to the computer. In other words, operating systems make computers user friendly. Different computer manufacturers use different operating systems. Apple computers use Macintosh OS Most PC’s commonly use the OS called Windows (XP, Vista, 7)

6 MAC OS User Interface Icon: A graphical symbol for an application, folder or file. Menu Bar: a horizontal menu that appears on top of a window which has a list of options. Desktop: the shaded or colored backdrop of your screen. Doc Station: Provides shortcuts to commonly used programs

7 CPU (Microprocessor) Stands for Central Processing Unit, which is the brain of your computer. It does all the thinking for the computer and process all the information to be turned into files on your computer. The clock speed of the microprocessor in now measured in gigahertz (GHz). The higher the number; the quicker the information processed. The chip shown below can process up to 2.80 GHz.

8 RAM (Random-Access Memory)
RAM temporarily stores data that the computer is currently working on. It requires for power to be turned on. It is the determining factor in how fast your applications or software run. The information in RAM goes away once the computer is turned off, so it is important to save any work you want to keep. It is measured in megabytes (MBs). The larger the size , the faster it functions

9 Read Only Memory (ROM) This is read only memory which is the permanent type of memory the computer stores for information that does not change It stores the information even when the computer is shut down. ROM is generally installed by the manufactured of the computer as part of its system.

11 Motherboard This is the main circuit board that connects all other internal components, such as the CPU and memory. It’s like the blood vessels inside the human body, which connect to all the vital organs. Instead of blood vessels, the motherboard uses tiny electrical paths to connect each part of the computer. One important part on the motherboard is the BIOS, which is where the computer's settings are stored and changed.

12 BIOS Basic Input/Output System.
When the computer is first turned on (booted), the BIOS is responsible for establishing basic communication with all the computer parts. It is the program which wakes the computer up when you turn it on and reminds itself what parts it has and what each part is supposed to do. After booting and performing a few system checks, It turns the computer over to your operating system.

13 Storage Devices Compact Disc Re-Writable (CD-RW) is a type of disk which enables you to write onto it several times. The storage capacity can vary, but it typically holds 700 MB of data. Compact Disc Read-Only Memory (CD-ROM) is a disk that enables you to write onto it once. These are typically used to save save music or data that does not change. Digital Versatile Disc (DVD) is a type of disk that holds digital representations that combine sound and graphic.

14 Storage Devices A Hard drive is a large capacity, permanent storage used to hold programs and documents. This is stored inside your computer and holds the largest amount of data A Floppy Disk is a portable magnetic disk that can hold up to 1.44 MB of data. This holds the least amount of data. A USB or flash disk is a small, portable flash memory card that plugs into a computer’s USB drive and functions as a portable hard drive. Online Activity: Different kinds of storage devices

16 Power Supply It supplies the fuel (power), for the computer.
supply power to the motherboard and the drives It contains a fan that helps assist in the task of cooling the computer. It comes in a variety of wattages. 200 watt and 250 watt, are the most commonly used

17 Ports Ports are located on the outside of a computer and ports are where you plug in other hardware. On the inside of the case they are connected to the expansion cards. Today, most new computers use USB ports. Keyboard & Mouse Printer Scanner (USB) Monitor or LCD 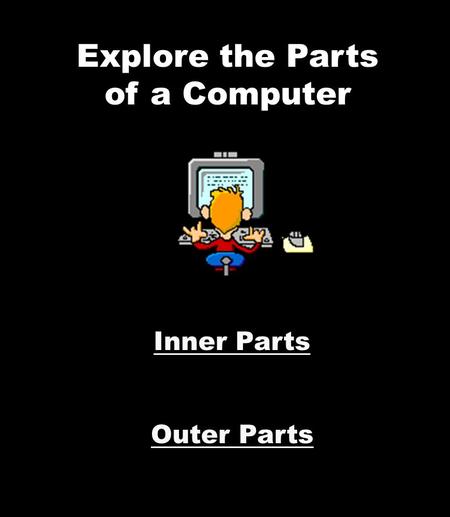 Explore the Parts of a Computer Inner Parts Outer Parts.