Presentation on theme: "ICAICT101A Operate a Personal Computer. A computer is an electronic device that allows you to process and store data (information)… 2."— Presentation transcript:

3 Data is entered into the computer by using a variety of input devices : keyboard, scanner, mouse Once entered, the data can then be processed eg to produce a report The information can then be made available on a variety of output devices : computer screen, printer Data can also be stored saved for future use

5  The Central Processing Unit (CPU) is a chip or the “brain” of the computer and directs activities on the computer.  Its job is to receive and carry out instructions millions of times every second. 5

6  A peripheral device is a device that is attached to the computer by port or wireless.  It usually performs some input or output task, eg printer, scanner, speakers, internal/external DVD or hard drive. 6

7  Peripheral devices are attached to the computer via ports located at the back or front of the computer, or by wireless technology.  The most common type of physical port used today is a USB port. 7

11  If the computer is turned off or if there is a power failure, all the data that is stored in Random Access Memory (RAM) is lost!  If you want to keep data to use again later you must save it.  You can save it to a permanent storage device such as the hard disk (C:) a USB, a DVD/CD or an external hard drive. 11

12  Computers come with a built-in DVD burner and hard disk drive. These storage devices allow you to save data as a file for future use.  The hard disk is a fixed disk installed inside the computer. Most hard disks store between 250gb and 4tb.  DVD and CD drives store data digitally and can hold as much as 17gb. 12

15 A computer file is an electronic document. When a file is saved it needs to be correctly named.  Every file name ends with a dot(.) followed by an extension of 3 or 4 letters.  Windows operating system automatically puts the correct extension on a file for you. You must never use a dot (.) in a filename.  A file saved in MS Word will have an extension of.docx, Excel.xlsx, PowerPoint.pptx. A picture file is likely to have an extension of.jpg. 15

16  After a while you will become familiar with the various file extensions and recognise what program a file was created in.  Files also have different icons to help identify the program they were created in:  Filenames can include upper and lower case characters and/or numbers, but cannot include most symbols, eg / \ : * ? “ ” 16

17  System files are used by the computer and should never be renamed, deleted or altered.  Some system file extensions include:.com.exe.bat.sys.dll.cfg 17

Download ppt "ICAICT101A Operate a Personal Computer. A computer is an electronic device that allows you to process and store data (information)… 2." 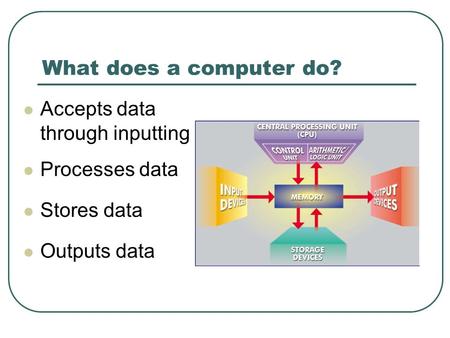 What does a computer do? Accepts data through inputting Processes data Stores data Outputs data.