3  Thomas Hobbes › Expressed his ideas in a work called Leviathan.  In it he argued that people are naturally cruel, greedy, and selfish.  Without control they would fight, rob and oppress each other.  Life without laws would be solitary, poor, nasty, and brutish. › To escape this “brutish life” people entered into a social contract (agreement).  In which they gave up the “state of nature” for an organized society. › Believed only powerful governments could ensure orderly society.  He wanted an absolute monarchy.

5  John Locke › Believed people were reasonable and moral. › Thought people have natural rights (rights that belong to all humans at birth).  Included Life, Liberty, and the Property. › In Two Treaties of Government, Locke argued that people formed governments to protect their natural rights. (He preferred limited power forms of government). › He said the government has an obligation to the people it governs.  If government fails its obligations then people have the right to overthrow it. › These ideas later spread across the world.

7  1700s France › An influential thinker was Baron de Montesquieu.  Studied governments of Europe.  Studied European, Chinese and Native American cultures. › He criticized absolute monarchy. › In 1748, he published The Spirit of the Laws.  In it he wrote about governments throughout history.  Wrote admiringly about Britain's limited monarchy.  Liked the idea of separation of power in government.  Also liked “checks and balances”.

9  Separation of power, shares the power between different areas or branches of government. › The power of one branch can always be challenged by another branch. › This way each branch has an effect on the others. › No one branch of government can get to much power.  Using the checks and balances system helps to balance the power of the government.

10  In France, Philosophes applied methods of science to better understand and improve society. › Thought use of reason could lead to reforms of government, law, and society.  Their ideas spread across Europe and to other continents.

11  One famous philosophe was Francois-Marie Arouet. › He later took the name Voltaire. › He said, “My trade is to say what I think.” › Used his intelligence to expose the abuses of his day.  He liked to target corrupt officials and idle aristocrats  He detested the slave trade and deplored religious prejudice. › Voltaire’s outspoken attacks offended the French government and the Catholic Church.  He was later imprisoned and then exiled.  Always continued to defend “Freedom of Speech”.

12  Denis Diderot › Produced a 28-volume encyclopedia. › His purpose was to change the general way of thinking.  In it he denounced slavery, praised freedom of expression, and encouraged education.  Attacked divine right and traditional religions. › Pope threatened to excommunicate all those who bought or read any of the encyclopedia volumes. › Between 1751 and 1789, 20,000 copies were printed. › Helped spread Enlightenment throughout Europe and to the Americas.

13  Jean-Jacques Rousseau was a philosophe. › He believed people were naturally good. › Felt like this “good” was corrupted by society. › In 1762, set forth his ideas in “The Social Contract”. › He put his faith in “general will” or the best conscience of the people. › Felt like the individual should be subordinate to the community. › His work has influenced people for over 200 years.

14  Women didn’t have as much freedom as men.  Did have natural rights, but were limited to areas of the home and family.  Mid-1700s, some women began to protest this. › They questioned the notion that women were by nature inferior to men.  Mary Wollstonecraft › She accepted that women’s first duty was to be a mother. › Felt like women should be able to decide what is in her own interest and have some independence. › Published “A Vindication of the Rights of Woman”.  In it she called for equal education for men and women.

15  Physiocrats focused on economic reforms. › They rejected mercantilism which required government regulation of the economy.  Laissez Faire was a policy that allowed businesses to operate with little government involvement. › Physiocrats approved of this policy.  Mercantilists believed in in acquiring gold and silver wealth through trade.  Physiocrats believed that real wealth came from making the land more productive.

16  British economist that greatly admired physiocrats.  In his work, The Wealth of Nations, he said free market should be allowed to regulate business activity.  He also believed in supply and demand methods.  He strongly approved and supported Laissez Faire. › Still thought the government had a duty to protect society, administer justice, and provide public service.  Smith’s ideas would greatly influence and help shape the productive economies in the 1800s and 1900s.

17  Mary Shelley, the author of Frankenstein, was the daughter of what enlightened thinker, that worked for women’s rights during the 1700s? › Mary Wollstonecraft  Who believed that the purpose of separation of powers was to protect the liberty of the people?  Baron de Montesquieu  Who wrote and was the editor of the controversial Encyclopedia? › Denis Diderot  Which philosopher believed that people were basically good? › Jean-Jacques Rousseau  What author wrote Leviathan, and believed in social contract, but once entered into that contract was absolute? › Thomas Hobbes  Who wrote Two Treatises of Government, and believed in social contract, but that contract could be broken? › John Locke

18  Frenchman Francois-Marie Arouet, who exposed abuses of government and detested the slave trade, was better known as: › Voltaire  Who was the British woman that thought women should be free to choose and that girls and boys should be educated? › Mary Wollstonecraft  What book did Adam Smith write that said a free market should be allowed to regulate business? › The Wealth of Nations  Hands Off, or a policy that allows businesses to operate without government interference is called: › Laissez Faire  When people agree to give up their natural state for an organized government, they are said to have entered into a what? › Social Contract

19  What were “Lovers of Wisdom” called that used reason to lead to reforms of government, law, and society? › Philosophes  A what believed that natural laws could be used to define economic systems? › Physiocrats  Life, liberty, and property are examples of what? › Natural Rights  According to Hobbes and Locke, human nature was governed by what? › Natural laws  This person wrote Spirit of Law and came up with the idea of three branches of government: › Baron de Montesquieu 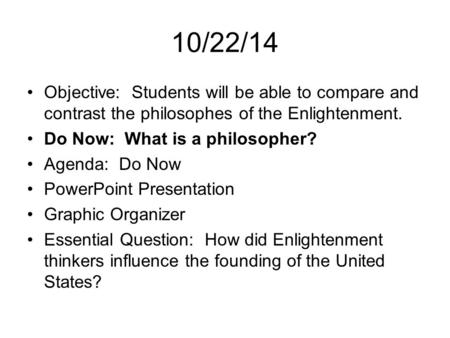