Presentation on theme: "By what right do governments exist? Ideas and Thinkers of the Enlightenment."— Presentation transcript:

1 By what right do governments exist? Ideas and Thinkers of the Enlightenment

2 What are natural laws? The laws that govern human nature In the 1500s and 1600s the Scientific Revolution changed the way Europeans looked at the world Look on page 446 to answer this question: What was the goal of Enlightenment thinkers?

3 Every Enlightenment thinker… Wanted to use reason to solve every social, political, and economic problem. The social contract is an agreement people enter into when they give up the state of nature for an organized society. Look on page 447 to find out how Thomas Hobbes described people.

4 Thomas Hobbes Believed that people were naturally cruel, greedy, and selfish Unless they were strictly controlled, they would rob and fight and oppress each other Only a powerful government (an absolute monarchy) could ensure an orderly society What did John Locke think about people?

5 John Locke Believed that people were naturally reasonable and moral People had rights that belonged to them from birth - natural rights What were the three natural rights?

6 John Locke The three rights were life, liberty, and property. The best kind of gov’t had limited power and was accepted by all citizens. If a gov’t fails its citizens or violates their natural rights, the citizens have the right to overthrow that gov’t.

7 John Locke If a gov’t fails its citizens or violates their natural rights, the citizens have the right to overthrow that gov’t. Yikes! Who do you think liked that idea?

8 Revolution If you thought Thomas Jefferson, you’re right! Also, the people who started the French Revolution and revolutions in Latin America. Look on page 447 to find a picture of the Enlightenment thinker we will be learning about next.

9 Montesquieu He studied all the gov’ts of Europe. He advocated separation of powers –The gov’t should be divided into three branches: executive, legislative, judicial. –Each branch should have the power to check (or stop) the power of the other branches.

10 Voltaire Believed passionately in the right to freedom of thought and of speech He said “I do not agree with a word that you say, but I will defend to the death your right to say it.” Look on page 447 to see what Voltaire fought against with his writings.

11 Voltaire He fought against corrupt officials, lazy aristocrats, inequality, injustice, the slave trade, and religious prejudice. He was put into jail and then forced to leave France. His books were outlawed and burned. Look on page 449 to see who produced the Encyclopedia.

13 Diderot The gov’t and church tried to ban the Encyclopedia but 20,000 copies were printed by 1789. The Encyclopedia spread its ideas across Europe and to the Americas. What did Jean-Jacques Rousseau believe was the natural state of human beings?

14 Rousseau Believed people were naturally good but were corrupted by the evils of society. Believed that society placed too many limitations on behavior The only acceptable limitations could come from a freely elected gov’t Look on page 449 to see how Rousseau was different from other Enlightenment thinkers.

15 Rousseau Believed that the good of the community should be placed above individual interests. Believed in the “general will” or best conscience of the people Did all of these Enlightenment ideas apply to women? Look on page 449 to find out.

16 Women and the Enlightenment Most philosophes believed that women only had limited rights. Mary Wollstonecraft wrote that women should be able to decide what was in their own best interest. She also called for girls and boys to receive equal education.

17 What about the physiocrats? Adam Smith was a British economist. –He was greatly in favor of a laissez faire economic policy. –The government should not regulate the economy. –The market forces of supply and demand will provide all of the regulation necessary.

Download ppt "By what right do governments exist? Ideas and Thinkers of the Enlightenment." 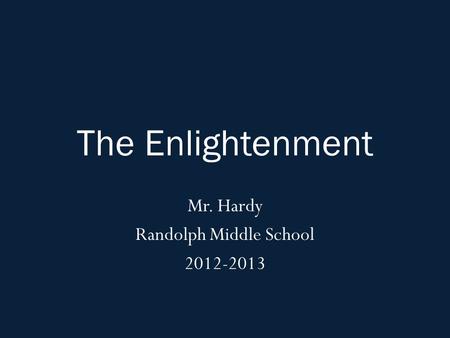 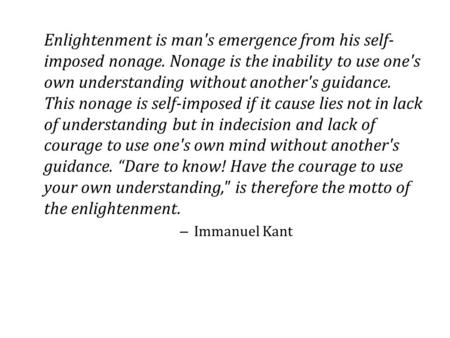