2 Brainstorm: ▪What do you know about the Enlightenment? ▪People? ▪Places? ▪Ideas?

3 The Enlightenment Thinkers SWBAT identify the main ideas of each of the major Enlightenment thinkers, compare their philosophies, and evaluate which thinker most influenced the era.

4 Thomas Hobbes Major Work: ▪Leviathan Ideas: ▪People are cruel, greedy and selfish. Therefore they need to be strictly controlled by a strong central government. ▪This is done so that people don't fight, oppress or rob one another also known as a State of Nature. In other words, man is naturally cruel, greedy, etc.. ▪Hobbes called for a social contract. People give up freedoms for an organized society. (less freedoms for the greater good)

5 John Locke Major Work: ▪Two Treatises of Government Ideas: ▪People are basically reasonable and moral. ▪People are born with rights that can’t be taken away: Life, Liberty, and Property (Natural Rights) ▪People form governments to protect their natural rights. ▪The best government has limited power and is accepted by all citizens. ▪If government fails the people, the people can overthrow the government.

6 Voltaire Major Work: ▪Several books which offended the French Government and Catholic Church Ideas: ▪Used sharp wit to target corrupt officials and aristocrats. ▪Wrote against social inequality, the slave trade, religious prejudice ▪Jailed, exiled, and banned from Paris all on the principle of freedom of speech.

7 Montesquieu Major Work: ▪Persian Letters ▪The Spirit of the Laws Ideas: ▪Spoke against social classes that seemed to be promoted by the French government. ▪The only way to protect liberty and avoid a corrupt government was to separate powers into three separate branches. Legislative, Executive, Judicial. ▪Each branch would be able to check the other two branches to ensure no abuse of power. This idea would be very influential when designing the United States constitution.

8 Denis Diderot Major Work: ▪Editor of the Encyclopedia Ideas: ▪His purpose was to “change the general way of thinking” ▪Targeted topics such as government, philosophy, and religion. ▪Featured articles by Montesquieu and Voltaire. ▪Articles denounced slavery, praised freedom of expression, and urged education for all. ▪Once translated, The Encyclopedia helped spread Enlightenment ideas through all of Europe and onto the Americas

9 Rousseau Major Work: ▪The Social Contract Ideas: ▪Unlike Hobbes, Rousseau believed that people in their natural state were good, but had been corrupted by society. ▪In the Social Contract, Rousseau expressed society placed too many limitations on people's behaviors. Furthermore, only freely elected governments could attempt to impose social controls. ▪Believed that the good of the whole should be placed above individual interest.

14 Enlightenment: ▪What do we Know now? ▪What did we learn? 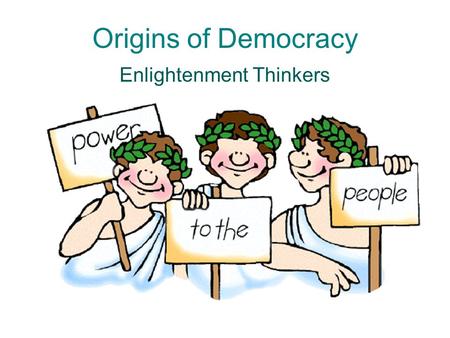 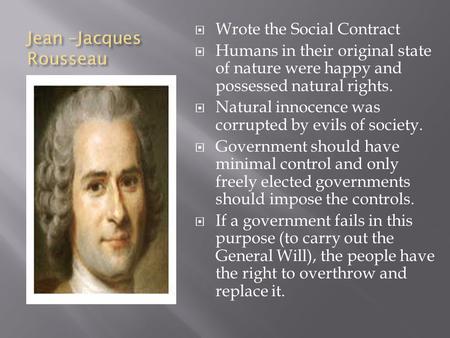 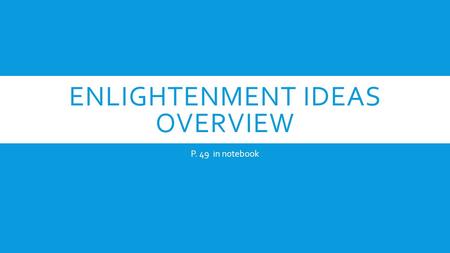 ENLIGHTENMENT IDEAS OVERVIEW P. 49 in notebook. WHAT WAS THE ENLIGHTENMENT ALL ABOUT? 1.) Last from ) New ways of thinking lead to the need.