2 Eli Whitney He was from Massachusetts Listened to Georgia planters’ complaints Cotton grew well, but cleaning the seeds out of the cotton fibers was a big problem A slave picking out seeds by hand could clean only a few pounds a day. At that rate, even using cheap slave labor, there was little profit in raising cotton

3 When the planters talked, a solution to their problem began to take shape in Whitney’s mind. Whitney had a gift for invention As a boy, he invented a machine to manufacture nails, hat pins and men’s canes. Went to Georgia after college to work as a tutor. Instead of tutoring, however, he became intrigued by the problem of cotton cleaning and he “struck out a plan of a machine in my mind.”

4 The result was an invention that changed life in both the North and the South—but in very different ways. As a northerner living in the South, he had already noticed many differences between the two areas of the country. As American citizens, northerners and southerners shared a fierce pride in their country and a faith in democracy. Cotton Gin

5 Outlooks and attitudes about many things were quite different. The two areas also differed in their economies, transportation systems and societies Between 1800 and 1850, these differences led to sharply conflicting views on many issues—so much so that, at times, Northerners and Southerners seemed to be living in two separate worlds.

7 Climate Experience four distinct seasons Freezing winters to hot, humid summers. The most northern states had colder winters and shorter summer growing seasons than those farther south such as Pennsylvania and Ohio

8 Natural Features Different areas of the North had distinctive natural features The New England coast: hundreds of bays and inlets perfect for harbors. Ship building, fishing and commerce flourished in this area while towns such as Boston became busy seaports Inland from the sea: a narrow, flat plain with a thin covering of rocky soil. Farming was not easy here. Instead many people turned to trade and crafts, others moved west in search of better farming. New England’s hills: rose sharply above V-Shaped valleys carved by steep streams. Hillsides offered barely enough land for small farms, but they were covered with thick forests of spruce and fir. Found they could make money by harvesting timber. Wood was used for shipbuilding and in trade with other countries.

9 New York, Pennsylvania, and New Jersey: Broad rivers like the Hudson and the Delaware had deposited rich soil over the plains. People supported themselves by farming. Appalachian Mountains: lay the Central Plains, a large forested region drained by the Ohio and Mississippi rivers. Plains boast some of the best agricultural soil in the world. From Ohio to Illinois settlers cleared the forests to make way for farms. Industrious Northerners were thus changing the landscape.

10 Deforestation Clearing of forests By 1850, Americans had cleared about 177,000 square miles of dense forest. With the growth of industry, the demand for coal and other minerals led to a big increase in mining after about 1820, especially in Pennsylvania.

11 Geography of the South The South extended from Maryland south to Florida and from the Atlantic Coast west to Louisiana and Texas. Climate and natural features encouraged southerners to base their way of life on agriculture

12 Climate Compared to the North, the Southern states enjoyed mild winters and long, hot, humid summers. Plentiful rainfall and long growing seasons made it perfect for raising warm weather crops that would have withered and died farther north. 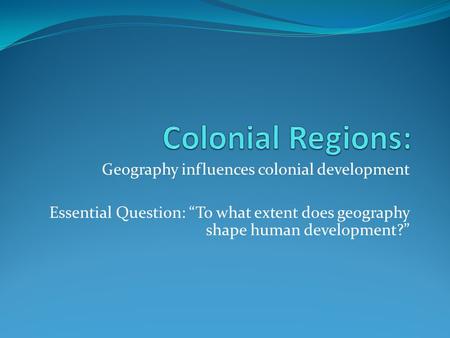 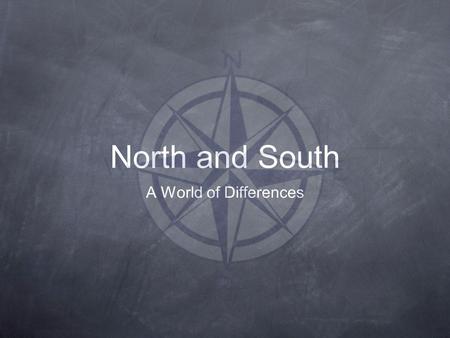 North and South A World of Differences. Big Idea How was life in the North different from life in the South? What did these differences lead to? 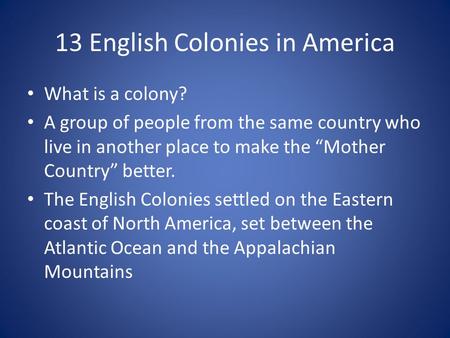 13 English Colonies in America What is a colony? A group of people from the same country who live in another place to make the “Mother Country” better.