4 Unit 1 A dvertising Grammar and Usage

5 Lead-in T: What did you eat this morning? Tom: ‘I ate …’
T： What did Tom say, Jack? Jack: He said he ate … direct speech reported speech 用简短的对话直接导入本课，让学生在较为真实的情景中接受直接引语和间接引语的概念。 We use direct speech to report what exactly has been said. If we write the speech down, the words will usually appear in quotation marks.

9 Practice 1: Change the following sentences into reported speech.
1. ‘I haven’t brought my dictionary,’ the student said. 2. Tom said to them, ‘ I will get excited.’ 3. My father said to me, ‘I am reading the book.’ The student said that he hadn’t brought his dictionary. Tom told them that he would get excited. 通过操练三个句子，检测学生对人称代词和时态变化的掌握情况，并加以巩固。 My father told me that he was reading the book.

10 What should we pay attention to?
learn more about it 1 personal pronouns and tense 2 adverbials of time and place e.g. He said, ‘I lost a key here yesterday.’ He said that he had lost a key there the day before/the previous day. Ex. ‘I read the book here a week ago.’ Jane said to him. 引入新的规则，即时间和地点状语的变化。 Jane told him that she had read the book there a week before.

12 Practice 2: Change the following sentences into reported speech.
1. ‘I will come and see you again this evening, Tom.’ he said. 2. ‘I will come here again today,’ she said. 3. The doctor said to the patient, ‘You will have to wait till 3 pm tomorrow.’ He told Tom that he would go and see him again that evening. She said that she’d go there again that day. 再次当堂操练帮助学生体会时间和地点状语的变化，并进一步巩固时态和人称代词的变化。 The doctor told the patient that he would have to wait till 3 p.m. the next day.

13 What should we pay attention to?
1. personal pronouns and tense 2. adverbials of time and place 3. other cases Directed speech Reported speech this that these those come go 用表格直接引入两个指示代词和个别动词的变化, 并通过例句向学生指出应用中应注意的特殊情况。

17 How to use reported speech to report:
statements questions imperative sentences 通过讲练法让学生学会在陈述句，疑问句和祈使句中的具体用法。用例句为学生创设语境。

18 Can you give more examples?
Statements: *We use noun clauses introduced by that to report statements. She said, ‘Ads are an important part of our lives.’ She said that ads were an important part of our lives. ‘There are two main types of ads,’ the writer said to us. The writer told us that there were two main types of ads. *More reporting words: ‘PSAs are often placed for free,’ the writer said. The writer explained that PSAs were often placed for free. advise explain insist promise announce suggest warn Can you give more examples?

20 Questions: *We use noun clauses introduced by whether/if to report yes/no-questions. ‘Are all ads playing tricks on us?’ I asked her. I asked her whether/if all ads were playing tricks on us. *We use noun clauses introduced by wh-words to report wh-questions. I asked her, ‘How can that be true?’ I asked her how that could be true. ‘Where did you find the ads for jobs abroad?’ Bill asked. Bill asked where I had found the ads for jobs abroad.

22 Imperative sentences:
*To report imperative sentences, we use the structure: reporting verb+object+(not)+to-infinitive. ‘Don’t worry, Mickey,’ Jen said. Jen asked Mickey not to worry. *other verbs can be used in this structure ‘Don’t believe every ad you read,’ Lily said to me. Lily advised me not to believe every ad I read. reporting verb object (not) to-infinitive advise encourage invite recommend warn Let’s do some Ex for consolidation! You can do it well!

23 Practice: Change the following sentences into direct speech.
1. My mother recommended me not to take those weight-loss pills. 2. My brother ordered me to go there at once. 3. My father warned us not to throw the waste paper everywhere. My mother said to me, ‘Don’t take these weight-loss pills. My brother said, ‘ Come here at once.’ My father said to us, ‘Don’t throw the waste paper everywhere.’

24 Consolidation Finish Ex. A and B at P.11
在情景中操练所学内容，能激发学生的学习兴趣，体现寓教于乐原则。 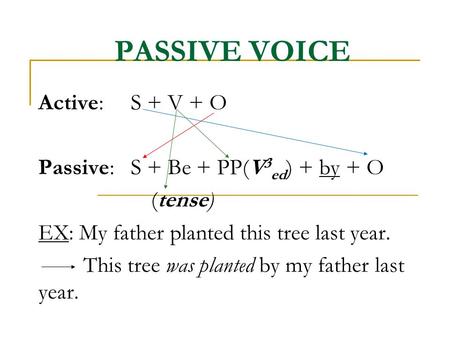 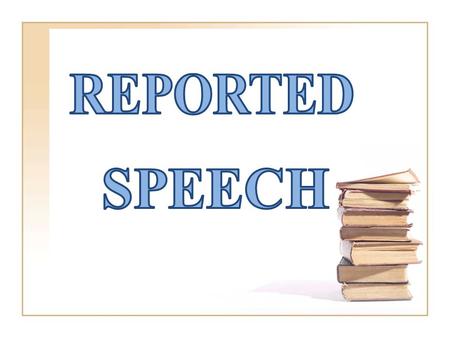 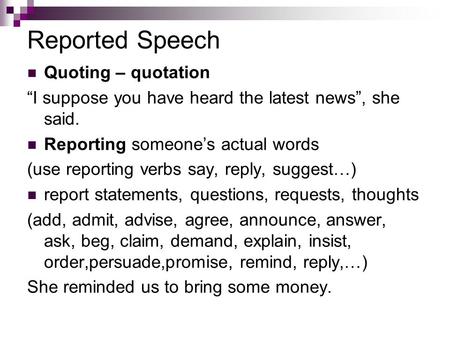