4 The following modal verbs do not change in reported speech: could, would, should, might, ought to and used to. Would doesn’t change: ‘I would prefer to study in London.’ → She said that she would prefer to study in London. Must usually changes to had to: ‘You must read this text for the next lesson.’ → My teacher told me I had to read the text for the following lesson. Must does not change: when it is negative: ‘You mustn’t tell Katya our secret.’ → Ana told Stefan he mustn’t tell Katya their secret. when it expresses a deduction: ‘Arturo must still be asleep.’ → She said that Arturo must still be asleep.   NOTE: If the reporting verb is in a present tense, no tense changes are necessary: ‘I’ll help you with your homework.’ → She says she’ll help me with my homework.

5 QUESTIONS IN REPORTED SPEECH
To report a question, make the following changes Change the word order in the question to the same as a normal sentences Make the same tense changes as above Use the same question words (when, where, how, etc.) Use a full stop (.), not a question mark (?) ‘How long have you been living in London?’ → She asked me how long I had been living in London. ‘When can I phone you?’ → Abdullah asked Magdi when he could phone him. The auxiliary verbs do, does and did are not used; the question has the same form as a normal sentence ‘What time does the lesson start?’ → Ludmila asked what time the lesson started. ‘Yes/No questions’ use if or whether ‘Can I come to your party?’ → Aniela wanted to know whether she could come to our party. Verbs and phrases used to introduce reported questions: ask, wonder, want to know, enquire.

6 PRONOUN, ADJECTIVE AND ADVERB CHANGES IN REPORTED SPEECH
We usually make the following changes: you → he/she/they: ‘I spoke to you earlier.’ → He said he had spoken to her earlier. your → his/her/their; our → their: ‘I’ll come to your house later.’ → He promised that he would come to her house later. this/that (pronouns) → it: ‘You should give this to Joan.’ → She told him he should give it to Joan. this/that work (etc.) → the work; these/those cars (etc.) → the cars:‘This work is very good.’ → She told him the work was very good. today/ this week/ this month/ this year → that day/ that week/ that month/ that year tomorrow/ next month/ next year → the next/ the following day/month/year yesterday/ last week/ month/ year → the day before/ the previous day/ the previous week/ month/ year; the week/ month/ year before here/ there 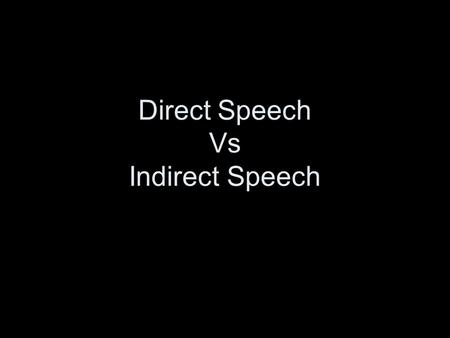