3 Mountains Separate the Indian subcontinent from the rest of Asia
Hindu Kush Northwest- it divides subcontinent from central Asia Rugged mountain range Khyber Pass- Khyber Pass begins about 10 miles outside the Pakistani city of Peshawar in the northwest frontier province and ends on the Afghan border at Torkham. Because it is the main connection between Afghanistan and the Indian subcontinent, the route through the Khyber Pass constitutes one of the major means of access to Central Asia.  Eastern & Western Ghats Low mountains that separate India’s east and west coast

5 Mountains Himalayas Himalayas, Sanskrit for ‘abode of snow’
Stretch 1,500 miles Along the northern border of Indian subcontinent Formed by collision of two massive tectonic plates The Himalayas cover approximately 75% of Nepal The Himalayas are the source for the Indus, the Yangtze and the Ganges and Brahmaputra. All three are major river systems for the continent of Asia Home to the world’s highest mountains Mount Everest-Highest mountain in the world Measures 29,035 feet K2 Northern Pakistan World’s second highest peak

8 Bodies of water-Oceans
Indian Ocean covering approximately one-fifth of the total ocean area of the world South of India Bay of Bengal large but relatively shallow embayment of the northeastern Indian Ocean, It is bordered by Sri Lanka and India to the west, Bangladesh to the north, and Myanmar (Burma) and the northern part of the Malay Peninsula to the east. Arabian Sea Northwestern part of the Indian Ocean covering a total area of about 1,491,000 square miles

9 Bodies of Water Gulf of Khambhat Gulf of Mannar
indenting northward into the coast of Gujarat state, western India trumpet-shaped gulf of the Arabian Sea Gulf of Mannar inlet of the Indian Ocean, between southeastern India and western Sri Lanka. the gulf is noted for its pearl banks and sacred chank (a gastropod mollusk).

11 Climates Arid Semiarid Tropical Wet Tropical Wet and Dry
receives less than 10 inches of rainfall in an entire year. Deserts are areas that are arid. Semiarid Characterized by relatively low annual rainfall of 10 to 20 inches having scrubby vegetation with short, coarse grasses; not completely arid. Tropical Wet high temperatures year round large amount of year round rain Tropical Wet and Dry Large amounts of rain during summer season There is a dry season in the winter Humid subcontinental hot, usually humid summers and mild to cool winters.

14 Population Where is the majority of the population located? Why do you think this is the case?

15 Population Look at the difference in the population density between U.S. and Bangladesh 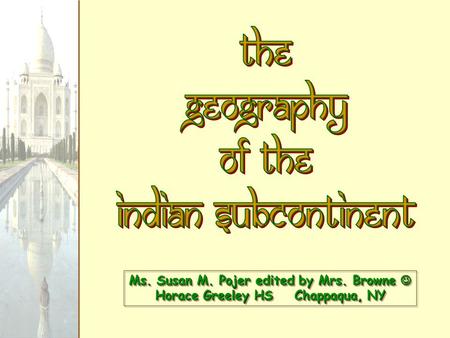