3 Gondwanaland Southern supercontinent.
Started to break up 175 million years ago.

7 The Indian Subcontinent
A part of Gondwanaland broke off and collided with Eurasia. The Himalayas and Hindu Kush were formed.

9 The Indian Subcontinent
A subcontinent is a large landmass that is smaller than a continent.

31 Hindu Kush Smaller in area than the Himalayas, but almost as high and just as rugged. Located mostly in Afghanistan. The word “kush” means “death.”

34 Khyber Pass Best known pass through the Hindu Kush.
For centuries, traders and invaders traveled through this pass.

38 Kashmir Isolated valley in northern India.
Famous for the production of a fine wool. Split between India, Pakistan and China.

50 Ganges River Largest river in India. Most holy river of Hinduism.
Joins with Brahmaputra to create an enormous delta in Bangladesh.

68 Q: What large landmass split up millions of years ago, resulting in India’s collision with the rest of Asia? A: Gondwanaland

69 Q: What two terms are used to describe this region of the world?
A: South Asia & the Indian Subcontinent

71 Q: What is the name of the territory in northern India that is claimed by both India and Pakistan?
A: Kashmir

72 Q: What is the name of the famous mountain pass through the Hindu Kush mountains?
A: Khyber Pass

73 Q: What geographic term is used to describe a landform that is low in elevation and relatively flat?
A: Plain

74 Q: What is the large plain in the northern part of South Asia?
A: Indo-Gangetic Plain

76 Q: What geographical term is used to describe the landform formed at the mouth of a river?
A: delta

77 Q: Which country is largely composed of the huge delta formed by the Ganges and Brahmaputra?
A: Bangladesh

78 Q: Which two rivers combine to form the largest delta in South Asia?
A: Ganges & Brahmaputra

79 Q: What two names are used to describe the large desert located in South Asia?
A: Thar & Great Indian Desert

80 Q: In which two countries is the Thar Desert located?
A: India & Pakistan

81 Q: What geographic term is used to describe an elevated area that is relatively flat?
A: plateau

82 Q: What is the name of the large plateau in central India?
A: Deccan Plateau

83 Q: What mountain chain has the biggest influence on the amount of precipitation the Deccan Plateau receives? A: Western Ghats

84 Q: What geographic term is used to describe when one side of a mountain receives a lot of moisture and the other side almost none? A: rain shadow 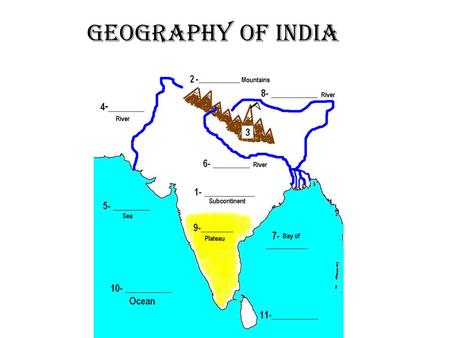 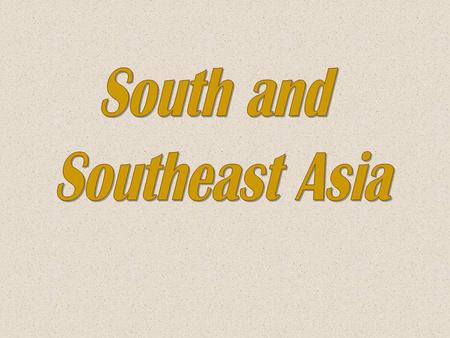