4 Rivers, Deltas, and Plains
Great Rivers Indus River flows west and then south through Pakistan to the Arabian Sea Ganges River drops down from the central Himalayas and flows eastward across northern India. Brahmaputra River winds its way east, then west and south through Bangladesh The Ganges and Brahmaputra meet and form a delta before entering the Bay of Bengal.

8 Offshore Islands Sri Lanka The Maldives Lush tropical land
Rugged mountains dominate the center – 8,000 feet in elevation The Maldives Comprise an archipelago – island group of more than 1,200 small islands (200 are inhabited) Atoll – an island formed from a peak of a submerged volcano.

9 Natural Resources Great River systems bring alluvial soil (rich soil) down from the mountains. When rivers overflow their banks, they deposit this soil on alluvial plains – lands that are rich farmland. Result: Indo-Gangetic Plain is one of the most fertile farming regions in the world

18 Human-Environmental Interaction
Ganges River – not only an important water resource, but also a sacred river to the Hindus (the religion of most Indians) Most well-known river and extremely important to human life in this region (Lifeblood of India) Flows 1,500 miles from its source in a Himalayan glacier to the Bay of Bengal Important for Indians Drinking water, farming, and transportation

19 A Sacred River According to Hindus, the Ganges is a sacred river that brings life to its people. The Hindus worship the river as a goddess, and they believe its water has healing powers. Sacred sites and temples line the banks of the Ganges Pilgrims come from all over the world to drink and bathe in its waters Scatter ashes

22 Varanasi One of the most sacred sites on the Ganges
As sun rises, Hindu pilgrims enter the water for purification and prayer They float baskets of flowers and burning candles on the water Daily celebration of their faith in the Ganges and its sacred water.

23 A Polluted River One of the most polluted rivers in the world
Millions of gallons of raw sewage and industrial waste flow into the river everyday Huge problem According to Hindus, Ganges is too holy to be harmed by pollution 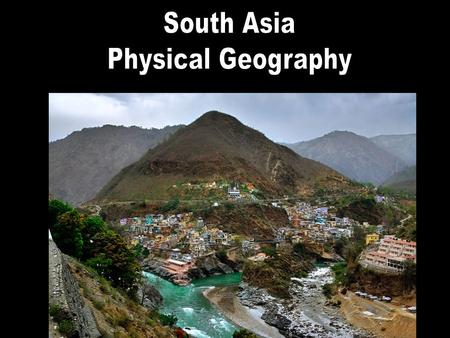 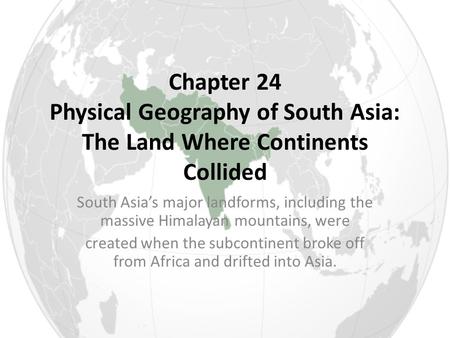 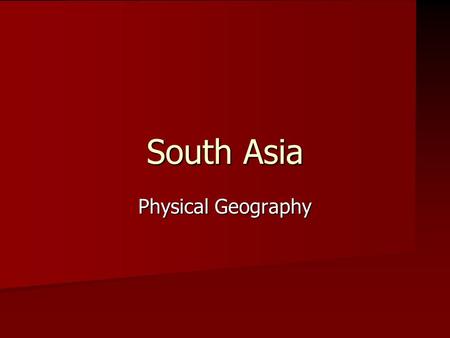