3 HIMALAYAS Separate India from other countries in the region Contains the world’s highest mountain, Mt. Everest (~29,000 ft above sea level)

7 Hindu Kush Smaller in area than the Himalayas, but almost as high and just as rugged. Located mostly in Afghanistan. The word “kush” means “death.”

9 Khyber Pass Best known pass through the Hindu Kush. For centuries, traders and invaders traveled through this pass.

12 Kashmir Isolated valley in northern India. Famous for the production of a fine wool. Split between India, Pakistan and China.

21 GANGES RIVER Religious rituals of the Hindu include: –Bathing for purification and –Disposal of their deceased RESULT: One of the most polluted rivers in the world

22 Ganges River Largest river in India. Most holy river of Hinduism. Joins with Brahmaputra to create an enormous delta in Bangladesh.

30 Climates With monsoons to the South and East, there is heavy seasonal rainfall (India). Dry climates to the west (in Pakistan). Highland climates in the north (Pakistan, Nepal, Bhutan).

31 MONSOONS To the people of India, the monsoons are a source of life. Seasonal reversal of winds bring heavy rainfall or no rain at all. General onshore movement in summer, bringing rainfall (lots of it). General offshore flow in winter, resulting in little rain. Very distinctive seasonal precipitation

34 TSUNAMIS A series of ocean waves generated usually by an earthquake in the sea floor. In the deep ocean, the tsunami wave may only be a few inches high. The tsunami wave may come gently ashore or may increase in height to become a fast moving wall of turbulent water several meters high. 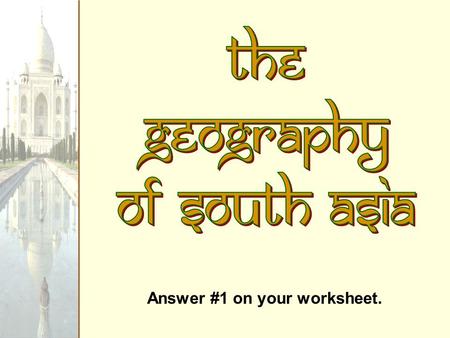 The Geography of South Asia Answer #1 on your worksheet. 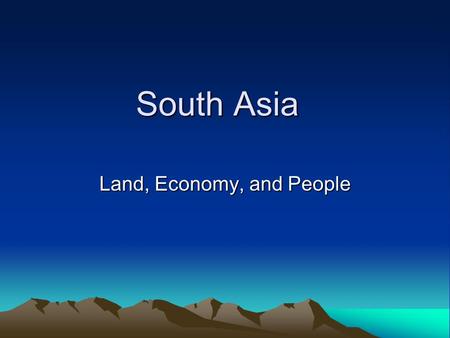