2 South Asia Includes the countries of India, Bangladesh, Bhutan, Nepal, Pakistan, and Sri Lanka South Asia is considered to be a subcontinent. A subcontinent is a large landmass that is part of a continent. India is the largest country and the second most populous country next to China.

4 More about South Asia The subcontinent is divided into 3 main geographic regions: the Northern Mountain Rim, the Northern Plains, and the Deccan Plateau. Each region has distinct landforms and climates that determine how the people live.

5 The Northern Mountain Rim
Made up of several mountain ranges The Himalayas and the Karakoram Range separate the subcontinent from the rest of Asia. The Khyber Pass allows passage between Asia and the South Asian subcontinent. The Himalayas stretch 1,500 miles across India and Nepal. Mt. Everest is the highest peak in the world. The terrain in this region is rough making it difficult to farm, so few people live in this region.

7 The Northern Plains Located between the Himalayas and southern India, includes the Ganges and Indus River valleys. Large deltas form where these 2 rivers empty into the sea. A delta is a triangular deposit of soil at the mouth of a river. The Ganges river carries sediment which makes the soil good for farming. Because of the farming, this area is densely populated. In ancient times, the Indus River valley was fertile, but is now mostly desert and few people live in this region.

8 The Deccan Plateau Makes up most of India
The Eastern and Western Ghats mountain ranges are found here. Along the coastal plains you can find fertile soil and water is plentiful. Fewer people live on the Deccan Plateau than in the Northern Plains.

10 Island Countries The island countries are Sri Lanka and the Maldives.
Sri Lanka is a mountainous island off the coast of India. The Maldives is a group of 1,200 low, flat coral islands. People live on only about 300 of the islands though.

12 Monsoons South Asia has 3 seasons: cool, hot, and rainy
June through September marks the coming of the monsoon winds and the rainy season. Monsoons are seasonal winds that blows over the northern part of the Indian Ocean. In South Asia, heavy monsoon rains fall from June through October.

15 More About Monsoons School starts in India in June after the rains begin. They take their break in during the spring when it’s too hot to study. Agriculture depends heavily on the monsoon season. If the monsoon comes early, farmers don’t have time to plant their seeds, and if it comes too late, the crops fail. Sometimes the rain is too much causing flooding that ruins crops, damages property, and is dangerous to people. 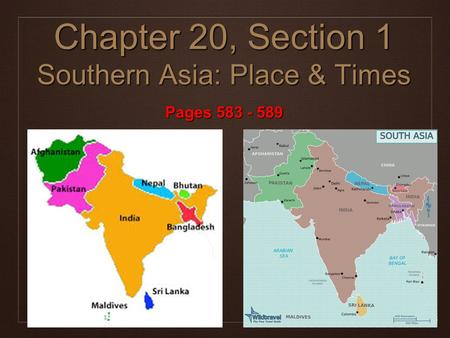