Presentation on theme: "What are they and why do we need them?. What is a government? The act of governing; the exercise of authority; the administration of laws; control; direction;"— Presentation transcript:

1 What are they and why do we need them?

2 What is a government? The act of governing; the exercise of authority; the administration of laws; control; direction; regulation; as, civil, church, or family government. Who has a government? Countries States Cities Schools Churches

4 Theocracy A theocracy is a system of government in which God or a deity is held to be the civil ruler or an official that is divinely guided. Are there theocracies today and where are they located? YES! Iran and Vatican City They are both ruled by leaders that are appointed by God. The pope and the Supreme Leader.

5 Iran’s Supreme Leader: Ayatollah Ali Khamenei Appoints Key Leaders Appoints the Chief Judge, Prosecutors, and Special Counsel. He decides who may or may not run for president.

7 Monarchy A government ran by a monarch who usually inherits the authority, such as a queen or king. There are over 40 Monarchies in the World today.

8 Two types of Monarchies Absolute Monarchy- The King or Queen has total control of the county and the right to make all decisions. Constitutional Monarchy- a type of government where the king or queen has limited powers and they are limited by a constitution and elected officials.

14 Oligarchy The rule of a few, and those few are generally the people who are richer and more powerful than the others, what you might call the aristocrats or the nobles. Burma is an example of an oligarchy. It is ruled by a junta. A junta is a group of military officers who rule a country after seizing power.

16 Communism A social and economic structure and political idea that promotes the creation of an equal, classless, stateless society based on common ownership and control of the means of production and property in general. In communism, common people are not allowed to own property, everything belongs to the state. All income is divided equally and no one earns more than anyone else.

17 China China is a communist country. Leader of China: Hu Jintao The Chinese government holds total control of the government and the economy.

19 Dictatorship A government which is ruled by an individual, the dictator, without inheriting the position. A dictator usually gains the position by force or military victory over a country or region. There are many countries today that have dictatorships. Cuba, Venezuela, Chile, Sudan, and North Korea are a few of the countries.

20 Cuba: A dictatorship Castro came to power in 1956 when he overthrew the American backed government. Leader: Fidel Castro

27 The Legislative Branch The legislative branch is the lawmaking body of the government. It is made up of the Senate and the House of Representatives. The House is based on the state’s population. Each state gets to elect 2 senators.

28 The Judicial Branch The judicial branch of the government makes sure the constitution is followed. This branch checks to see if the legislative branch is making laws that agree with the constitution. There are 9 Supreme Court Justices.

29 Representative Government: The State Level The state executive branch is headed by the Governor. The governor of Tennessee is Phil Bredesen. The governor can serve 2 four year terms in office.

30 Representative Government: The State Level The legislative branch is made up of state senators and members of the state house of representatives. Just like in the U.S. Senate, the state Senate has 2 Senators. TN has 20 members in the legislature. The state Supreme Court is made up of 5 Justices. They hear cases in Nashville, Knoxville, and Memphis.

Download ppt "What are they and why do we need them?. What is a government? The act of governing; the exercise of authority; the administration of laws; control; direction;" 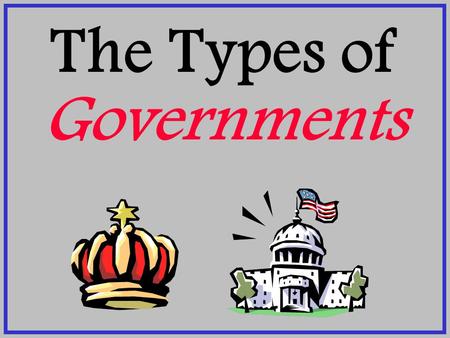 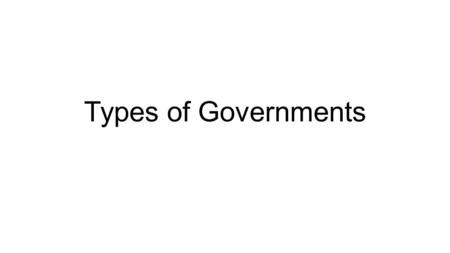 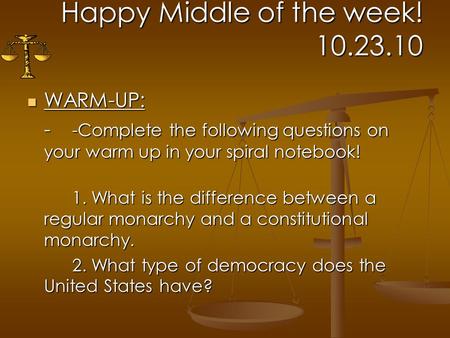 Happy Middle of the week! WARM-UP: WARM-UP: - -Complete the following questions on your warm up in your spiral notebook! 1. What is the difference. 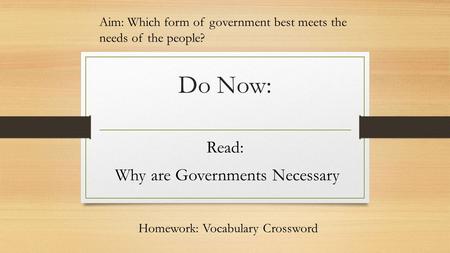 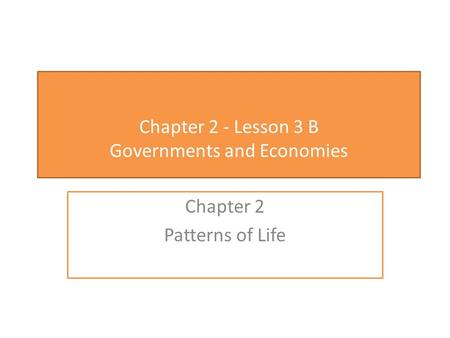 Chapter 2 - Lesson 3 B Governments and Economies Chapter 2 Patterns of Life. 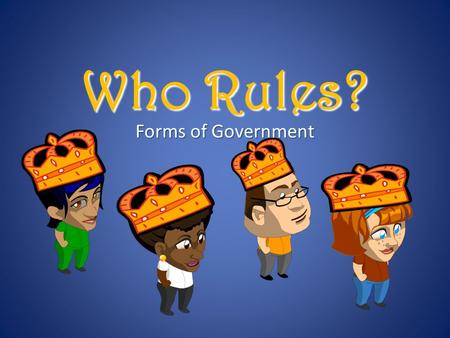 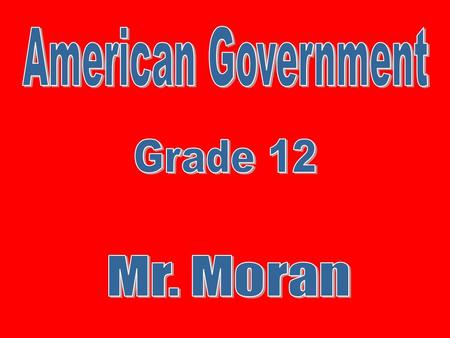 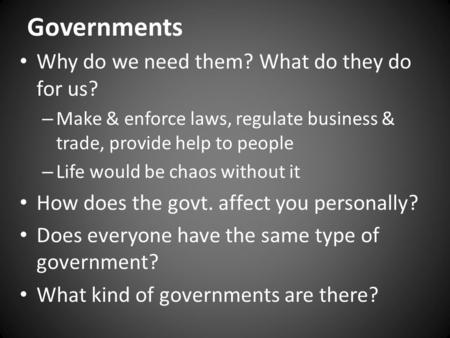 Governments Why do we need them? What do they do for us? – Make & enforce laws, regulate business & trade, provide help to people – Life would be chaos.