2 What Is Government?. Government is the institution through which a society makes and enforces its public policies.

3 To study governments we will look at the following:
Types – Who rules and who participates. Levels/Systems – How the power is distributed.

5 Autocracy Government in which the power to govern is held by one person. Generally the power to rule is inherited or by military force. There are three types of Autocracy.

6 #1 Dictatorship The leader has not been elected and uses force to control all aspects of social and economic life. Examples: Adolf Hitler in Germany and Joseph Stalin in the Soviet Union

7 #2 Absolute Monarchy A monarchy has a king, queen, emperor or empress. The power is usually inherited or passed down from family members. The monarch has absolute power meaning they can make all decisions without consulting anyone. Examples: Bahrain, Brunei, Oman, Qatar, Saudi Arabia, Swaziland

8 #3 Constitutional Monarchy AKA Limited Monarchy
Kings, queens or emperors share power with elected legislatures. Generally the Kings are northing more than figureheads. The government is a democratic one that limits the monarchs power. Example: Great Britain

9 Totalitarianism Totalitarianism (or totalitarian rule) is a political system where the state recognizes no limits to its authority and strives to regulate every aspect of public and private life wherever feasible.

10 Totalitarianism…continued
Autocracy and totalitarianism are related concepts. Totalitarianism extends to regulating every aspect of public and private life. It does not necessarily imply a single ruler, but extends to include absolute rule by any faction or class of elites who recognize no limit to their authority.

11 Oligarchy A government in which a few people such as a dominant clan or clique have power. The group gets their power from either military, wealth or social status. Elections may be held but offer only one candidate. Examples: Greek city states

12 Theocracies Theocracy is a form of government in which a state is understood as governed by immediate divine guidance provided to ruling clergy or other ruling officials. From the perspective of the theocratic government, "God himself is recognized as the head" of the state, hence the term theocracy. Example: Iran

14 Classification by Who Can Participate
Democracy In a democracy, supreme political authority rests with the people. A direct democracy exists where the will of the people is translated into law directly by the people themselves. In an indirect democracy, a small group of persons, chosen by the people to act as their representatives, expresses the popular will. Dictatorship A dictatorship exists where those who rule cannot be held responsible to the will of the people. An autocracy is a government in which a single person holds unlimited political power. An oligarchy is a government in which the power to rule is held by a small, usually self-appointed elite.

15 In a democracy…. Individual freedom and equality is valued.
Free elections are held Decisions are based on majority rule. All candidates can express their views freely. Citizens vote by secret ballot.

17 Parliamentary Democracy
Voters elect members to the Parliament (legislature) Parliament has two Houses: House of Commons: The Political Party with the most votes in the House of Commons chooses the Prime Minister, the government’s leader with no set length of term. House of Lords: Little power with most members being nobles having inherited their titles

20 Classification by the relationship between Legislative and Executive Branches

21 Levels of Government are based on one question: How is the power distributed?
There are three ways governments distribute power: Unitary Confederation Federal

23 Unitary One central government controls everything.
Power is not shared between states, counties or provinces. Examples : United Kingdom, France, the Netherlands, and Spain

25 Federal A federal system divides the powers of government between the national level and state or provincial levels. Each level has sovereignty in some areas. Examples: United States, Germany 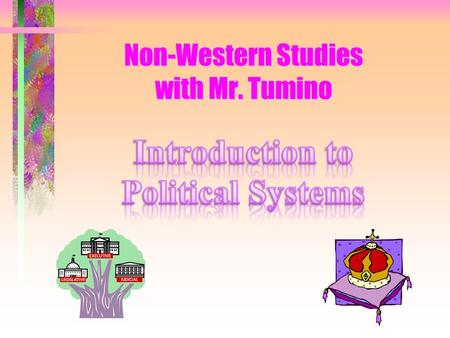