2 W HAT IS IT ? Sociology = studies human society and social behavior in a scientific manner. Look at two main aspects of society: Social interaction = how people relate to one another and influence one another’s behavior. Social phenomena = observable facts or events in human society.

3 W HY DO P EOPLE S TUDY S OCIOLOGY ? 1) Understand how behavior is influenced by social factors. 2) Learn how to view the world through others’ eyes Look beyond common beliefs and find hidden meanings= sociological perspective. 3) Attempt to balance one’s personal desires with their social environment. The ability to perceive larger circumstances and observe how they influence the individual= sociological imagination (C. Wright Mills) 4) Find your ‘place’ both within society and history.

4 A MERICAN S OCIOLOGICAL A SSOCIATION (ASA) Developed in 1905 and helped establish sociology as a distinct discipline in the U.S. Comprised of over 13,000 members Three-part mission statement: 1) Serve sociologists in their work 2) Advance sociology as a science and profession Sponsors and publishes several journals in which sociologists can present their findings. 3) Promoting the contributions and use of sociology to society Develop materials for teachers.

6 S OCIAL S CIENCES What do each of the other social sciences look at? Anthropology – cultures of past, less- advanced societies. Psychology – focuses on individual behavior. Economics – study of choices people make; how people are affected by economic factors. Political science – organization and operation of government. History – study of past events; how past events affect current behaviors and attitudes.

9 H OW S OCIOLOGY S TARTED Sociology did not develop until the 1800s. Sociology developed in Europe, because of changes as a result of the Industrial Revolution. People left their homes in the countryside and came to cities. As cities became crowded, people began to interact on a closer scale than ever before. Social problems such as housing shortages, crime, and lack of jobs arose. Individuals wanted to study the causes behind these social problems.

10 T HE E ARLIEST S OCIOLOGISTS Auguste Comte French (1798-1857) “father” or “founder” of sociology-- coined the term Believed that sociologists should worry about two problems: order and change social statics = aspects of a society that remain unchanged. social dynamics = elements within the society that change to allow for social development.

11 T HE E ARLY S OCIOLOGISTS ( CONT ’ D ) Herbert Spencer English (1820-1903) Adopted a biological view of society– saw society as an organism that grows and changes over time. Influenced by Charles Darwin Coined the phrase “survival of the fittest” Social Darwinism = the strong should have more wealth/power than the weak. Advocated against social reform efforts because it would disrupt the natural selection process of evolution. The best traits of society would survive over time.

13 T HE E ARLY S OCIOLOGISTS ( CONT ’ D ) Émile Durkheim French (1858-1917) First to apply scientific principles to study of society. Saw society as a series of interrelated parts, but the function(s) of these parts was his focus. Function = a consequence that an element of society produces in order to maintain the social system. Specifically looked at religion. 1897 study Suicide was the first of its kind– studied suicide rates in European countries; found that environmental and personal factors contributed to suicide.

14 T HE E ARLY S OCIOLOGISTS ( CONT ’ D ) Max Weber Prussian (1864-1920) Focused on studying the groups within a society rather than society as a whole. Believed in the use of Verstehn to put yourself in someone’s place to study meanings behind an individual’s actions. Created the term ideal type to refer to the essential characteristics of a feature of society. What features can be used to describe items across cultures?

17 F UNCTIONALISM T ERMS Manifest functions of institutions are open, stated, conscious functions. They involve the intended, recognized, consequences of an aspect of society. Ex: Car  mode of transportation Latent functions are unconscious or unintended functions and may reflect hidden purposes of an institution. Ex: Car  status symbol A dysfunction is an element or a process of society that may actually disrupt a social system or lead to a decrease in stability. Ex: crime

19 C ONFLICT - EXPLAINED Let’s take a look at the passenger death rates for the Titatnic on its fateful voyage.

23 R EVIEW : W HICH IS FUNCTIONALISM, CONFLICT PERSPECTIVE, OR SYMBOLIC INTERACTIONISM Societies are in relative balance F Power is the most important element in life C Religion helps hold together a society morally F Symbols are crucial to social life S/I Many element exist in society to benefit the powerful C Social change is constantly occurring C Conflict is harmful and disruptive to society F 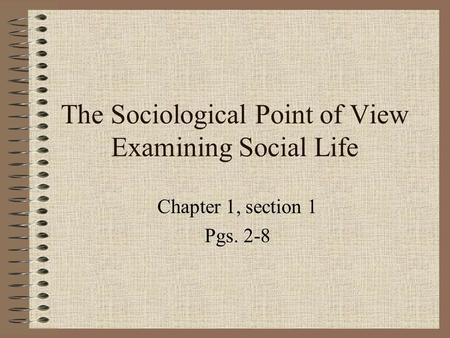