2 The Beginning According to legend, Rome was founded by Romulus and Remus (twin brothers)

3 In the Beginning… Ancient Rome began as a group of villages along the Tiber River in what is now Italy. Around 750 B.C. these villages united to form the city of Rome.

4 Rome was built on seven rolling hills at a curve on the Tiber River
This strategic location in the middle of the Italian Peninsula gave Rome fertile soil.

8 Formation of Roman Republic
For more than 200 years, kings ruled Rome. In 509 B.C. a group of patricians drove out the last Etruscan ruler and proclaimed Rome an independent republic (a form of government in which power resides in the people, and the government is ruled by elected leaders run according to law).

9 Patricians & Plebeians
In the beginning most of the people elected to the Senate were patricians. Patricians controlled the law since they were the only citizens allowed to be judges. Plebeians had the right to vote, but could not hold public office until 287 B.C, when they gained equality with patricians.

10 Government in Rome Romans replaced their monarchy with elected officials called consuls. Two Consuls were elected from the Senate witch was made up of the Roman upper class. These two officials ruled at the same time for a year’s term. They each had full power with the right to veto the other’s actions.

11 Roman Army Romans were constantly at war.
Rival city-states tried to take advantage of Rome by invading their territory. Roman forces conquered their neighbors overtime. Rome made treaties with the conquered towns, permitting them to operate independently in local matters. In return these towns were expected to provide troops for the Roman army in time of war. Resulting in endless sources of troops for Rome to use as they made conquests throughout Italy.

12 Roman Expansion Under the leadership of ambitious generals, Rome’s highly trained soldiers took over most of the land surrounding the Mediterranean. The ancient Romans called the Mediterranean mare nostrum, meaning “our sea”.

13 Roman Wars Were brutal and bloody.
Roman soldiers made slaves of the defeated people. Roman allies started to pay tribute money to show their loyalty.

14 Roman Power Maintained power by colonization.
Roman citizens were planted throughout the countryside to establish the Roman presence. Romans began building an extensive system of roads and bridges. Conquered lands were now connected to Rome. The Roman army and Roman traders could move anywhere with ease and speed.

15 Romans built over 53,000 miles of roads to connect every part of their empire. The roads were mostly built by the army and were all done by hand.

17 After the Punic Wars Increasing wealth and expanding empire brought many problems The most serious problem was the widening gap between the rich and the poor.

18 Thousands of slaves were captured and made to work on Latifundias [lat-uh-fuhn-dee-uh m] = huge estates. 1

19 2 Thousands of Soldiers returned from war without jobs or homes.
They moved to cities like Rome to find work. They became part of the poor class. 2

20 Two Brothers Tiberius and Gracchus tried to help Rome’s poor by proposing to: Give land to the poor Limit the size of estates (latifundias) The senators felt threatened and the two brothers were murdered

21 Rich Romans became corrupt with money and luxury and tensions between the rich and the poor caused a civil war! 3

23 Triumvirate The First Triumvirate = Julius Caesar, Crassus and Pompey
Triumvirate = a group of three leaders working together in government He conquered all of Gaul in France

24 Caesar’s Reforms He became the absolute ruler of Rome = he had total power. He expanded the Senate by adding his friends Created jobs for the poor and expanded land Raised pay for soldiers

26 Why did Julius Caesar have enemies among the rich and powerful?
military victories = very popular with the Romans. His soldiers were very loyal to their leader so Senate was afraid of his popularity and power. Pompey and some senators tried to take over power and Caesar defeated Pompey. After the civil war, Caesar was given more power. Senators didn't trust anyone who wanted to be a dictator and take their power. They thought he was trying to end the Republic. Caesar tried to get control of the senate by adding more senators who were loyal to him. Therefore, the senators felt their power was slipping even further. He granted citizenship to many Greeks. This made many Roman citizens angry.

28 End of the Republic & Rise of the Empire
Caesar’s death changed Rome: People no longer trusted the Senate to rule Rome & the Roman Republic came to an end & the empire began

29 The Rise of the Roman Empire
Octavian emerged as the unchallenged leader of Rome, was given the title Augustus (“Exalted One”), & became Rome’s first emperor Under Augustus, Rome was ruled as an empire; the Senate still met but the emperor had all the real power Augustus ruled Rome for 41 years

35 The Age of Augustus (Imperial Rome)

36 A Vast and Powerful Empire
Octavian the adopted son of Julius Caesar accepts the title Augustus (exalted one) During his rule, Rome reaches its peak in power and reaches a time of great peace From 27 B.C. to 180 A.D there will be a period of 207 years of peace called the Pax Romana

43 Closure Activity Would you rather live during the Roman Republic or the Empire? Discuss for 2 minutes with your table partner Take out a sheet of paper, put your name on it, title it “Republic vs Empire”– You will turn this in. Write down where you would live and give at least 3 reasons why 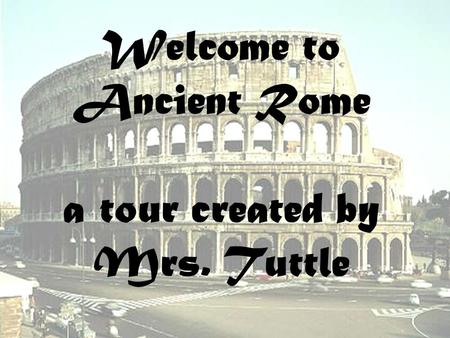 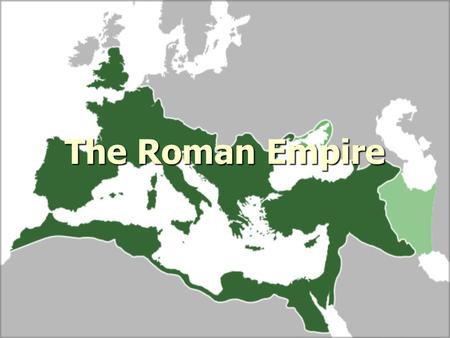