Social and Emotional Development in Infancy and Toddlerhood

Presentation on theme: "Social and Emotional Development in Infancy and Toddlerhood"— Presentation transcript:

1 Social and Emotional Development in Infancy and Toddlerhood

3 Trust vs. Mistrust Conflict of infancy-trust vs. mistrust
1st stage- oral stage- infants obtain pleasure through mouth Healthy outcome depends on quality of mother’s behavior during feeding not amount of food or oral stimulation Dilemma is resolved positively if caregiving is sympathetic and loving

7 Anger and Fear Anger is expressed during first months through crying in response to unpleasant stimulus Fear increases about the sixth month and after : reasoning- survival, keep exploration in check; social signals to motivate caregivers Stranger anxiety- expression of fear in response to unfamiliar adults. Dependent on child’s temperament, past experiences with strangers and the situation in which the stranger is met.

9 Understanding and Responding to the Emotions of Others
Between 7 – 10 months infants perceive facial expressions as organized patterns, and they can match the emotional tone a voice with the appropriate face of the speaking person Social referencing- infant relies on a trusted person’s emotional reaction to decide how to respond in an uncertain situation-after 10 months –method of indirectly learning about the environment for infants and toddlers

10 Self-Conscious Emotions
Self-conscious emotions appear at the end of second year. Higher- order emotions-shame, pride, embarrassment, guilt, and envy Involve injury or enhancement of our sense of self Self conscious emotions assist children in acquiring socially valued behaviors and goals

11 Beginnings of Emotional Self-Regulation
Emotional self-regulation-strategies used to adjust emotional stages to a comfortable level of intensity In early months of life, infants only have a limited capacity to regulate their emotional states By end of first year, babies ability to move around permits them to regulate feelings more effectively by approaching or retreating from various stimuli

19 Underextention and Overextension
Underextension word applied to fewer objects and events. example – Buppie for child’s personal cup and cup for other cups Overextension- word is applied to a wider collection of objects, persons or events example Mommy used for all women

20 Attachment Infants’ strong affectional tie to familiar caregivers
Attachment does not depend on hunger satisfaction Research with rhesus monkeys reared with terrycloth and wire-mesh “surrogate mothers” showed clinging to terrycloth “mother” regardless of which “mother” provided food.

22 Phase of “clearcut” atttachment-upset and protest when familiar caregivers leaves-separation anxiety-appears universally around the world (after 6 months and increasing until 15 months of age) Formation of reciprocal relationship (18 months to 2 years and on)-begin to understand relationship of parent’s coming and going; children will talk about the parents’ plans and when they will return, leading to a reduction in separation protest

23 Stranger Situation Most common used method for measuring the quality of an infant’s attachment-between 1 to 2 years of age Children are classified into the following categories: secure avoidant, resistant, disorganized-disoriented definitions page

25 Interactional Synchrony
A sensitive tuned “emotional dance” in which the caregiver responds to infants signals in a well-timed, appropriate fashion. Both partners match emotional states

27 Siblings Most sibling relationships can best be be characterized as showing a rich combination of emotions, both positive and negative One way a mother can help her preschooler develop positive feelings toward a new baby is to discuss the baby’s feeling and intentions with the siblings

Download ppt "Social and Emotional Development in Infancy and Toddlerhood" 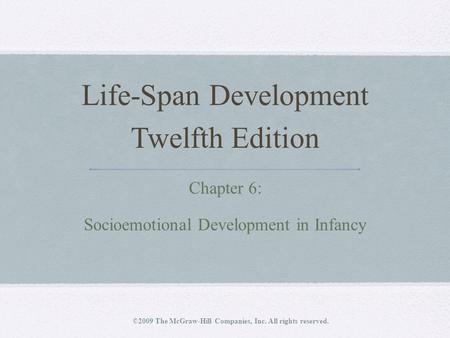 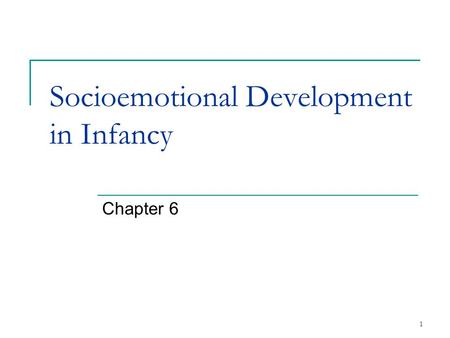 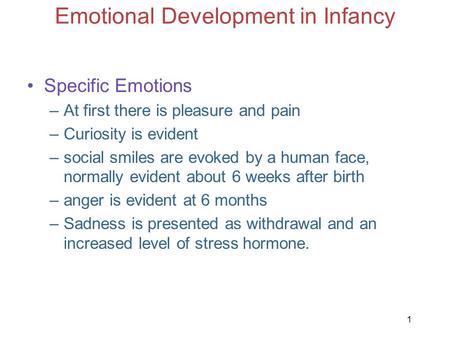 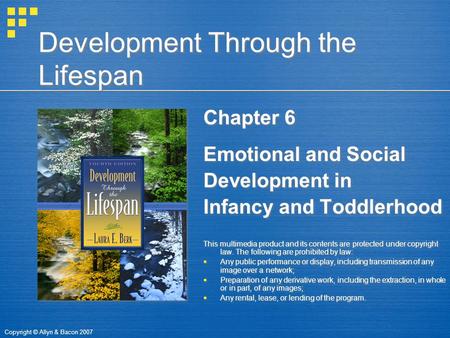 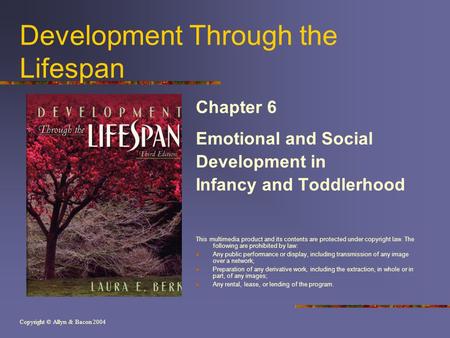 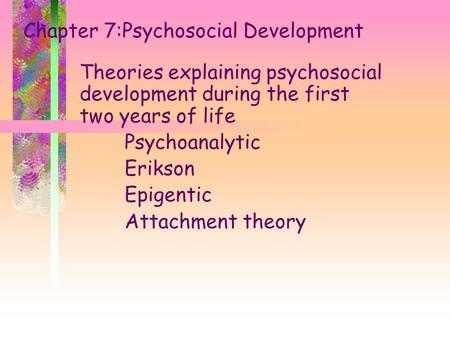 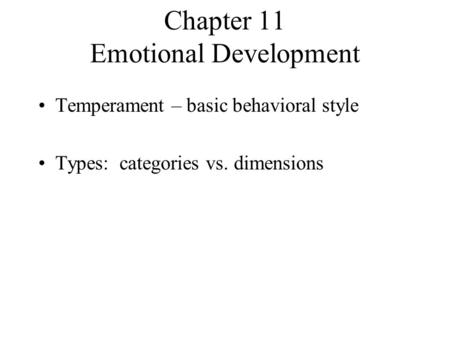 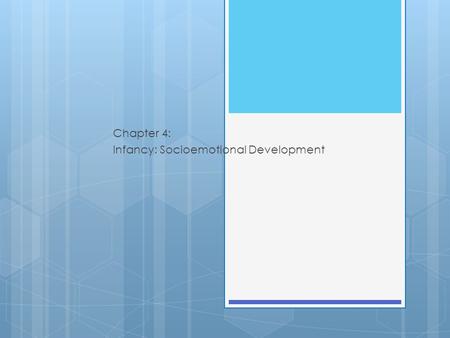 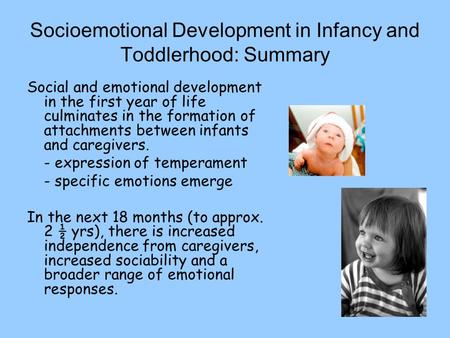 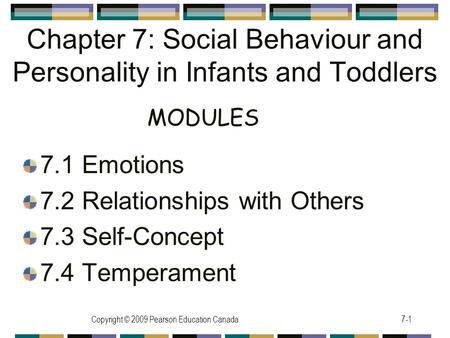 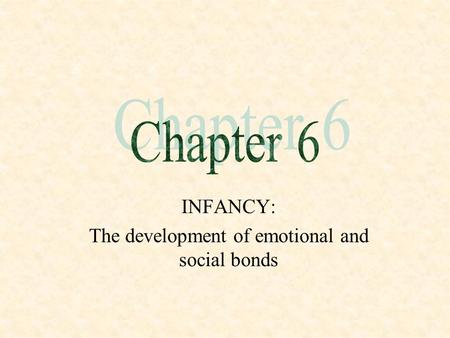 INFANCY: The development of emotional and social bonds 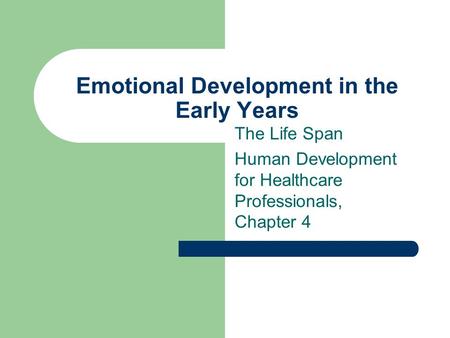 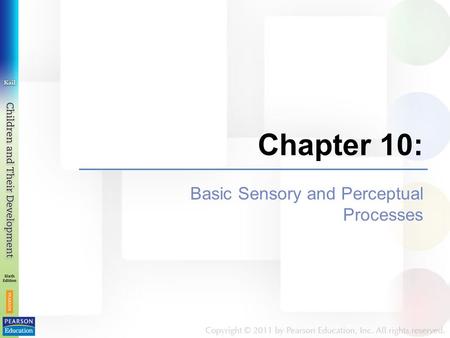 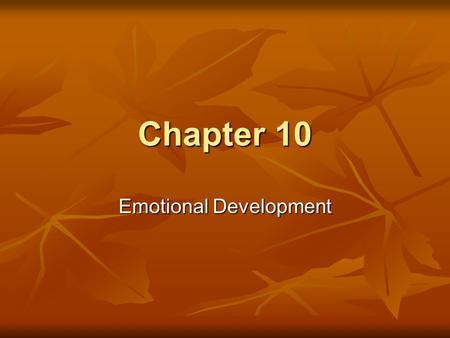