5 A Person We use a, an, or the before nouns that we want to introduce.
Nouns are names of people, places, animals or things. A Person A Place A thing 5

6 ‘A’ is used Before beginning with a consonant sound. Eg) a boy, a bird
Before a singular noun beginning (Eg) a book, a school, a dog. Even before vowel letters which don’t have vowel sound. (Eg) a European, a unit, a union. ‘A’ is used 6

8 We use a before words that begin with a consonant.
a girl a clock a lamp 8

11 We use an before words that begin with a vowel sound .
a,e,i,o,u are vowels an orange an umbrella an eye 11

16 We use the when we know that there is only one of a particular thing.
the sky the world the North Pole 16

18 Omission of article Before the names of relations (father, uncle,sister ) Before the names of material (gold, silver, diamond ) Before proper noun ( Lotus, Chennai, Priya ) Before abstract noun (honesty, wisdom, truth ) Before language ( Tamil, Hindi, English ) Before certain phrases ( at noon, by train, on foot ) 18

24 11.The Sahara is the biggest desert in the world.
12. Mani bought a car 13. We went to the temple and saw an elephant eating bananas. 14. Sekar is an advocate who is working in the USA. 15. The representative from Australia is an excellent speaker. 24 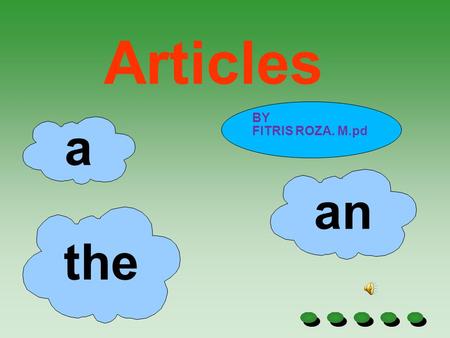 Articles a the an BY FITRIS ROZA. M.pd What is an article It is an adjective. It modifies a noun.