Presentation on theme: "The  The definite article the is used before both singular and plural specific nouns that indicate a particular thing or member of a group and may be."— Presentation transcript:

3  The is used when the noun cannot be counted. ex.: The coffee I had this morning was too sweet. ex.: The ink in my pen has run out.  The is not used with non-countable nouns that refer to something in the general sense unless the non- countable noun is made more specific by a modifying phrase or clause. ex.: Coffee is my favorite drink; the coffee that I had this morning was stale.

4 1. To refer to something which has already been mentioned. Example: An elephant and a mouse fell in love. The mouse loved the elephant's long trunk, and the elephant loved the mouse's tiny nose. 2. When both the speaker and listener know what is being talked about, even if it has not been mentioned before. Example: “Where's the bathroom?” “It's on the first floor.” 3. To refer to objects we regard as unique: Example: the sun, the moon, the world

5 4. In sentences or clauses where we define a particular person or object. Example: The man who wrote this book is famous. My house is the one with a blue door. 5. Before superlatives and ordinal numbers: Example: the highest building, the first page, the last chapter. 6. With names of geographical areas and oceans: Example: the Caribbean, the Sahara, the Atlantic 7. With decades, or groups of years: Example: she grew up in the seventies

6  There is no article: With names of countries (if singular): Germany is an important economic power. He's just returned from Zimbabwe. (But: I'm visiting the United States next week.) With the names of languages: French is spoken in Tahiti. English uses many words of Latin origin. Indonesian is a relatively new language. With the names of meals: Lunch is at midday. Dinner is in the evening. Breakfast is the first meal of the day.

7  There is no article: With people's names (if singular): John's coming to the party. George King is my uncle. (But: we're having lunch with the Morgans tomorrow.) After possessive case: His brother's car. Peter's house. With professions: Engineering is a useful career. He'll probably go into medicine. With titles and names: Prince Charles is Queen Elizabeth's son. President Kennedy was assassinated in Dallas. Dr. Watson was Sherlock Holmes' friend. (But: the Queen of England, the Pope.)

8  There is no article: With names of shops: I'll get the card at Smith's. Can you go to Boots for me? With uncountable nouns: Rice is the main food in Asia. Milk is often added to tea in England. War is destructive. With years: 1948 was a wonderful year. Do you remember 1995? With the names of individual mountains, lakes and islands: Mount McKinley is the highest mountain in Alaska. She lives near Lake Windermere. Have you visited Long Island?

9  There is no article: With most names of towns, streets, stations and airports: Victoria Station is in the centre of London. Can you direct me to Bond Street? She lives in Florence. They're flying from Heathrow. In some fixed expressions, for example: by car by train by air on foot on holiday on air (in broadcasting) at school at work at University in church in prison in bed

10 Some The indefinite word some is used for plural general nouns (ex.: some students).

11 A and an  The use of a and an indicates that the noun modified is indefinite (no particular member of a group). They are used when the noun modified is singular and general.  A and an are used when the noun can be counted (ex.: a vehicle, an apple).  Place the word a in front of any noun referring to one thing within a type but not constrained to one token thing. In other words, use a for any one dog but not necessarily that dog. ex.: A cat jumped onto my lap.  If an amount is referred to (such as any or one) the a is no longer required. ex.: Any box will do.

12  A precedes singular nouns that begin with a consonant (ex.: a student). Exception #1: When a singular noun begins with a vowel that sounds like a consonant, a is used (a uniform; u in uniform sounds like yoo). Exception #2: An before an h mute - an hour, an honor.  An precedes singular nouns that begin with a vowel (ex.: an address).  When the article and the noun are separated by an adjective, the article that agrees with the initial sound of the adjective is used (ex.: an English student; a wrong address).  Neither a/an or the should be used when referring to proper names unless it is part of the name. ex.: George went to Cedar Point. ex.: Kelly’s favorite book is The Lion, the Witch, and the Wardrobe.  When a pronoun replaces the noun in a sentence, the a/an or the is no longer needed. ex.: The cat came running, or it came running.

13  To refer to something for the first time. Example: An elephant and a mouse fell in love.  To refer to a particular member of a group or class: such as the names of jobs, nationalities, religions, musical instruments and days of the week. Examples: John is a doctor. John is an Englishman. Sherlock Holmes was playing a violin when they came. I was born on a Thursday.

14  To refer to a “kind of,” or “example of” something. Examples: The mouse had a tiny nose. The elephant had a long trunk. It was a very strange car.  With singular nouns, after the words 'what' and 'such‘. Examples: What a shame! She's such a beautiful girl.  Meaning 'one', referring to a single object or person. Examples: I'd like an orange and two lemons please. The burglar took a diamond necklace and a valuable painting.

Download ppt "The  The definite article the is used before both singular and plural specific nouns that indicate a particular thing or member of a group and may be." 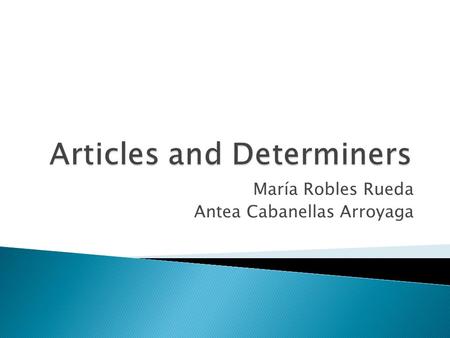 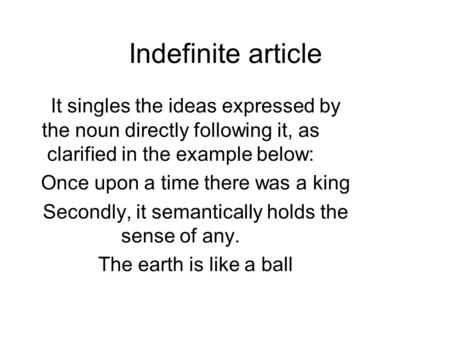