Presentation on theme: "Chapter 17, Section 1. Question---Your Bellringer  How do you think the Scientific Revolution might have transformed how people looked at the events."— Presentation transcript:

2 Question---Your Bellringer  How do you think the Scientific Revolution might have transformed how people looked at the events in the world?

4 Natural Law outside of Science  Many asked if we could use Natural Law to understand social, economic and political problems.  This is one way the Scientific revolution transformed all thought…..  Immanuel Kant was the first philosopher to dub this era “The Enlightenment”

6 Thomas Hobbes once Said . In such condition there is no place for industry, because the fruit thereof is uncertain: and consequently no culture of the earth; no navigation, nor use of the commodities that may be imported by sea; no commodious building; no instruments of moving and removing such things as require much force; no knowledge of the face of the earth; no account of time; no arts; no letters; no society; and which is worst of all, continual fear, and danger of violent death; and the life of man, solitary, poor, nasty, brutish, and short.

7 Huh?  Hobbes published his ideas in “The Leviathan.”  Hobbes believed that people are naturally cruel, greedy, violent, and selfish……  If not strictly controlled, they would rape, murder, steal everything….  No, that is not this classroom….  This was life in the State of Nature….

8 The Way Out?  He described life in the state of nature as “Nasty, Brutish, and short…”  To survive, he believe man entered a social contract You would give up some freedoms in exchange for protection from the government

9 Think-Pair-Share  Partner A: What rights would you be willing to give up in order for protection by your government?  Partner B: What type of government might protect its citizens the best.

11 Locke’s Differences  Locke was more optimistic than Hobbes  He believed people were reasonable and moral.  He also believed people had certain natural rights Rights that belonged to all humans from birth He believed these rights included: Life, Liberty, and Property

12 Locke’s Book  Locke, in Two Treatises of Government, argued that the government was there to protect Natural Rights.  He, unlike Hobbes did not believe in an all-powerful central authority.  This is proven in the stance he took against James II.  He believed that James II should be de- throned for violating the rights of the English.

18 Montesquieu One of the Philesophes

19 The Spirit of the Laws  Montesquieu discussed the roles and successes of governments throughout history  He rejected absolute monarchy  In finding the best way to defend liberty, he argued the following That the various functions of government should be divided into three branches…

22 Voltaire: The most famous Philosophe  Famous for saying “My trade, is to say what I think”  He used wit in his writing to expose injustices of the day.  He targeted inequality, injustice and superstition all with his works.  He offended the French government and the catholic church with many of his works.

23 The End of Voltaire  He was eventually imprisoned and forced into exile.  Although many of his books were banned, he continued to defend free speech.

25 Another Social Contract Theory  He believed that people were inherently good, however their innocence was corrupted by the evils of society.  Rousseau’s Government: Should be minimal Should be freely elected Should uphold the general will ○ The best conscience of the people

26 Yet Another Metaphor  You will now make another sports metaphor for Rousseau. You will have 1 minute to prepare your metaphor. Partners will take turns sharing and questioning each other’s metaphors.

27 A New Economy  French thinkers began applying concepts of natural laws to economics. These French thinkers are known as the Physiocrats.  The physiocrats rejected the current economic system of mercantilism. Government regulation of the economy to create a fair balance of trade

28 So what Did they Believe in?  The Physiocrats pushed for a policy of laissez faire economics. A system where businesses could operate without government interference.

Download ppt "Chapter 17, Section 1. Question---Your Bellringer  How do you think the Scientific Revolution might have transformed how people looked at the events." 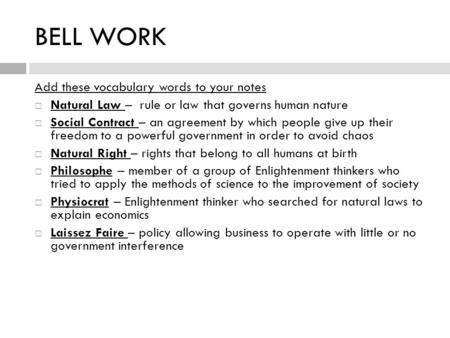 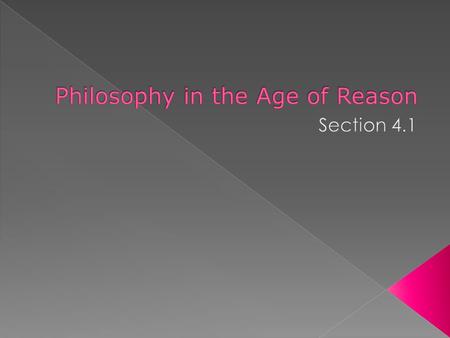