2 Discussion How do the locations of the Warsaw Pact countries differ from the locations of the NATO countries? Why? The Warsaw Pact countries were located in Eastern Europe and northern Asia, because they included the Soviet Union and the nations it occupied. The NATO countries were located in Western Europe and North America, because they included the United States and its Western allies.

3 Fears of Communism and Fears of Capitalism The Soviet Union fears capitalism: Worried that the Eastern European nations that it had liberated from the Nazis would become anti- Soviet, the USSR kept its military forces in those nations. The West fears communism: The United States and Great Britain wanted the nations of Eastern Europe to be allowed to determine their own governments. Tensions between the Soviets and the West increased.

10 Aid to Western European Nations The European Recovery Program: Believing that communism was most likely to be adopted in countries with economic problems, Secretary of State George C. Marshall proposed giving monetary aid to rebuild wartorn Europe in a program called the European Recovery Program. The program came to be known as the Marshall Plan. COMECON: The Soviet Union responded to the Marshall Plan by founding the Council for Mutual Economic Assistance, or COMECON. The council had little success due to a lack of major Soviet aid.

12 A Policy to Fight the Spread of Communism Kennan and Containment: U.S. diplomat George Kennan recommended a policy of containment in 1947 to keep communism within its existing boundaries. The U.S. government adopted Kennan's plan.

18 East-West Tensions Come to a Head in Berlin East and West Germany: Disagreements among the Allies about a final peace treaty after World War II, resulted in Germany being occupied by four countries: France, Britain, the United States, and the USSR. The Soviets tried to blockade the part of Berlin occupied by the other three countries, but it was foiled by an airlift. In 1949, Germany was divided into two parts.

19 Discussion Why do you think the U.S. chose a policy of containment rather than trying to force the Soviets out of Eastern Europe? the United States had just finished a war and did not want to get into another one with a country as powerful as the Soviet Union.

20 Discussion How were the alliances formed after World War II successful in preventing another war? NATO countries had enough combined power that the Soviet Union couldn't run the risk of pushing them into war. 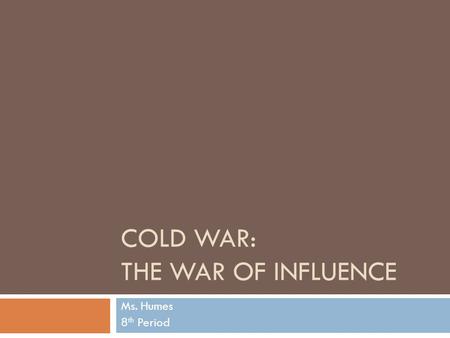 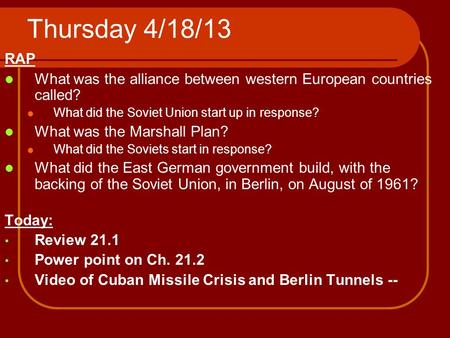 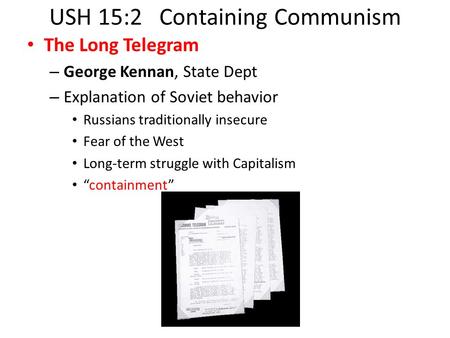