2 Vocabulary Lactation- The process of milk production in an animal.
Concentrate- Grains such as corn, barley and wheat. Concentrates will have less than 18% fiber. Conditioning- The amount of fat the covers the bone structure of the cow. Forage- Usually referred to as the feed that cattle gather themselves during the day. Mostly grass and edible trees. Contain a high amount of fiber. Ruminant- An animal that has a multi-compartmented stomach, such as; sheep, cattle and goats Maintenance- The amount of feed an animal consumes to allow for the growing and replacing of its; hair, bone, muscle, carry out pregnancy and replacement of other body tissue. Ration- The daily quota of feed an animal is allowed to consume by the farmer.

3 Vocabulary Feed- The name by which an animals food is called.
Hay- Usually grass or other such types of feeds harvested an stored for the animals ration during winter. High in fiber. Carbohydrate- Nutrient usually found in greater amounts in concentrates. Aids in giving the animal energy. Protein- Nutrient usually found in greater amounts in; clovers , alfalfa and soybeans. Aids in building muscle, hair and milk. Parturition- The act of an animal giving birth. Palatable- How something taste to the animal. Nutrient- Chemical element (a part of the animals feed) that aids in support of life and life functions.

5 Protein Supplements For Dairy Cattle: Urea
Urea can be used as a cheap non vegetable protein supplement for dairy cattle. Too much urea can be toxic to dairy cattle. Never feed more than .18 kg of urea per day to a dairy cow. Urea is very bitter to the taste and will not be palatable to the animal. Therefore completely mix the ration thoroughly so the animal will not hesitate to eat its feed.

6 Proteins Supplement For Dairy Cattle: Cotton Seed
Cotton Seed are high in protein and very palatable. The farmer must be aware of the fact that the hull part of the seed can have a constipative effect on the dairy cow. There are several cotton gins in Afghanistan so obtaining these seed will be possible.

7 Protein Supplements For Dairy Cattle: Soybeans
Soybeans are a high quality, high protein all vegetable protein supplement that is widely used world wide for animal feeds. Usually the bean is ground into a meal and fed as a supplement to the animals ration. The plants can be harvested for hay or even grazed.

8 Protein Supplements For Dairy Cattle: Alfalfa
Alfalfa is a very high quality dairy feed that can be used both for grazing and for hay. The plant is all vegetable and has a high protein content as well as being very palatable to the animal. Alfalfa is vey deep rooted and will withstand drought better than many forage crops.

10 Fodder Tree Options for Dairy Cattle
There are several tree option for farmers to consider as alternatives to grass and grain as feed; they are, Pistachio Black Locust Russian Olive

11 Feeding Methods Of Urea/Molasses To Increase Protein For Dairy Cattle
The principle is to mix urea and molasses together, adding water according to the viscosity ( thickness) of the molasses . The essential element consists in ensuring regular and continuous ingestion of small quantities of this mixture by the animal. For example: spraying the solution onto the low quality forage ration in the feed trough (straw, maize or sorghum stalks, …); or the system of licking wheels which dip into a trough of molasses whereby the liquid surface is not accessible to the animal; or adding substances which are bitter, so allowing reduction of the “palatability” of the mixture and thus, the amount and speed of intake is reduced, etc.

12 Mixing Urea/Molasses With Straw To Increase Protein For Dairy Cattle
Formula of the liquid mix molasses/urea (MUFeed) commercialized molasses % urea % mineral mix % water % Or top dress the straw with no more than .18 kg of urea per day per cow of Urea.

15 Basic Guidelines for Feeding Lactating Dairy Cows
In early lactation feed the cows a ration that has 18-19% crude protein. This means that you should feed a ration that is higher in; alfalfa, clover, soybeans or vetch after the cow calves. The cow should milk days. Divide those days by three and reduce the amount of those feeds by 3% every days until the ration has about 12-13% protein at the end of the lactation period. In other words feed less of the expensive feeds mentioned above and more of the inexpensive feeds such as grass ,fodder trees and shrubs as the cow gets nearer the end of its lactation .

16 Basic Guidelines for Feeding lactating Dairy Cows
Make sure that if feeds that are high in energy are available; corn, wheat, barley or oats, that the lactating cow has an ample amount of those feeds in its diet. As with protein feeds provide the animal with this ingredient, in the ration, at larger rates in the first and second phases of lactation. Feed your animals the highest rate of energy feeds in the second phase of their lactation and then taper off as the animal goes further along in its third phase of lactation. Any milking cow should peak in its production about midway, between days, through its annual lactation.

18 Basic Guidelines for Feeding lactating Dairy Cows
Forage Consumption Cows need forage. Part of their forage consumption is the hay that they consume and part of the forage that they graze upon. A good rule of thumb for forage consumption is: For every 45 kg of body weight make sure that the cow gets kg of forage at a minimum. Fiber is needed to maintain the amount of fat the milk will contain.

20 Conclusion Dairy cattle are like athletes. Too little feed and they will become weak, too thin and unproductive. Too much feed and they become fat and costly to keep. The trick is to get the right balance of the proper feeds into the animals ration. The animal must maintain its body for its own well-being and it must consume enough feed to produce milk and calves for you and your family. 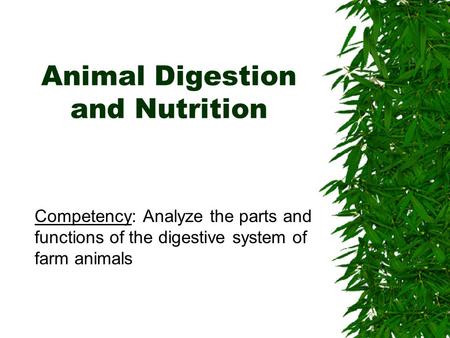 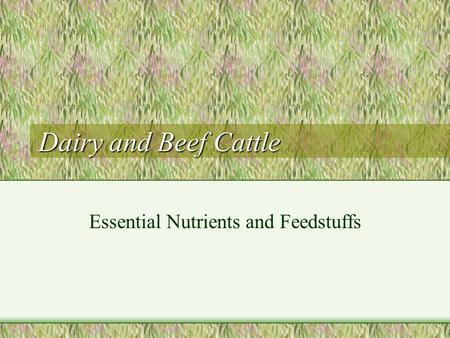 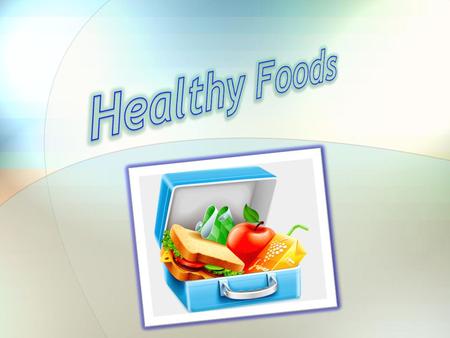 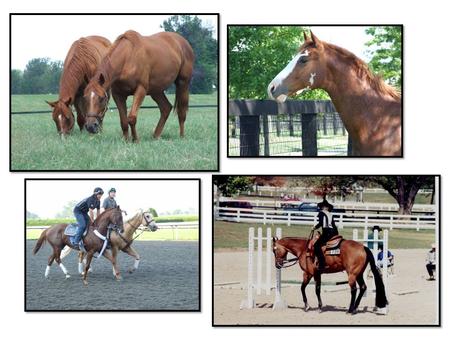 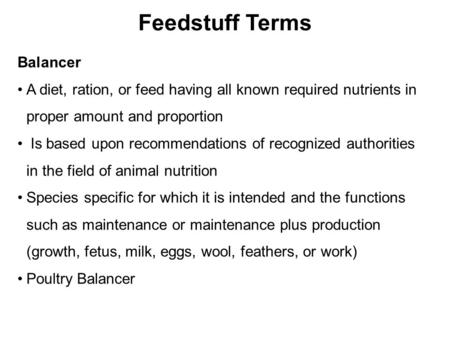 Balancer A diet, ration, or feed having all known required nutrients in proper amount and proportion Is based upon recommendations of recognized authorities. 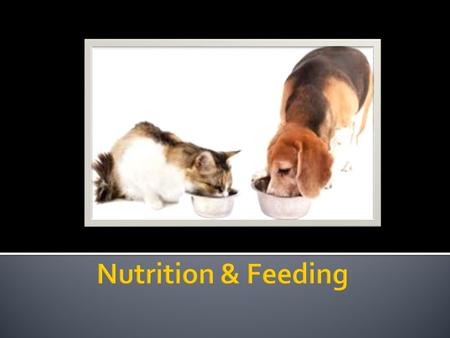 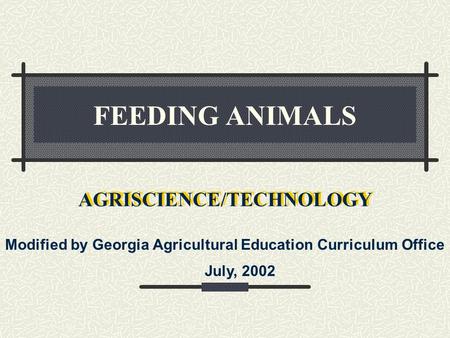 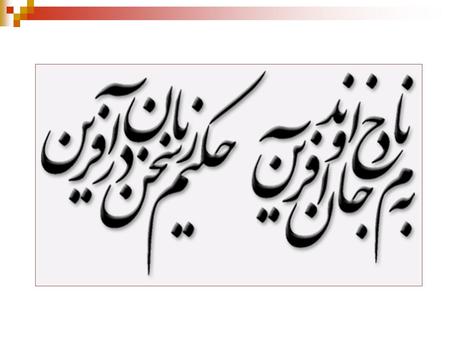 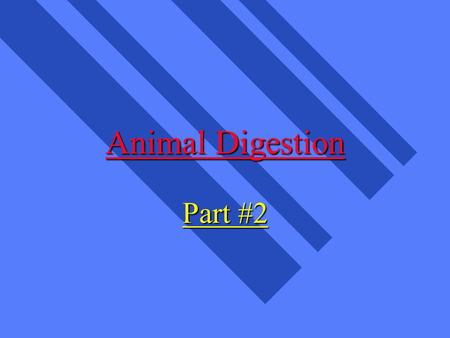 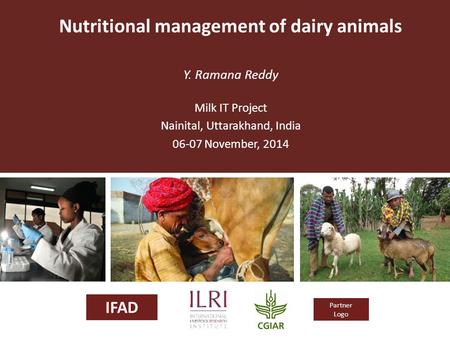 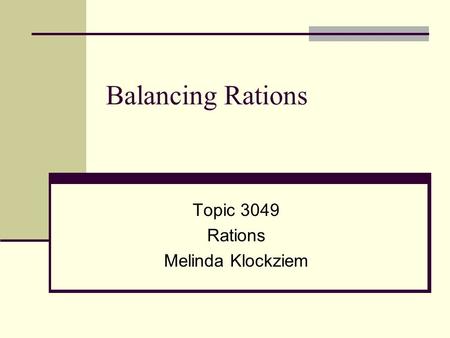 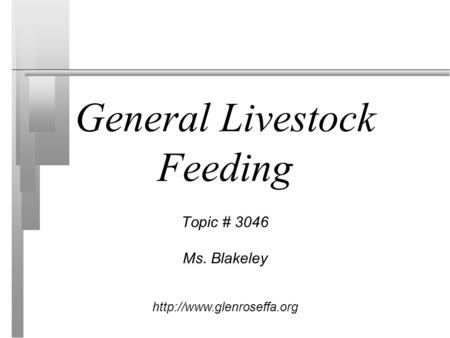 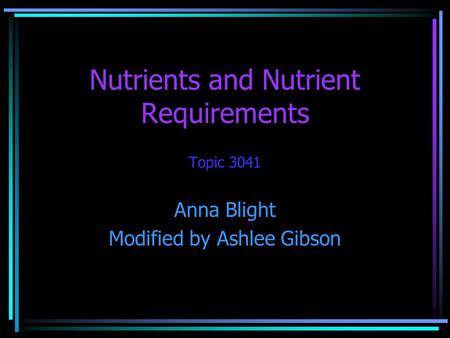 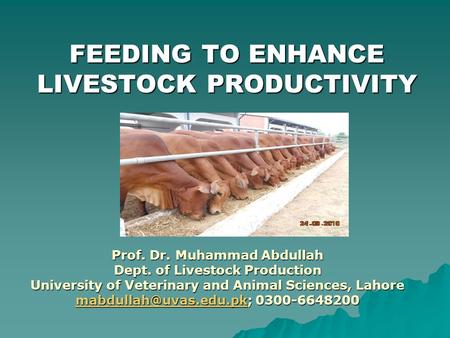 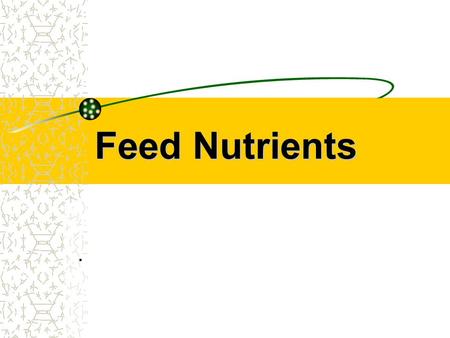 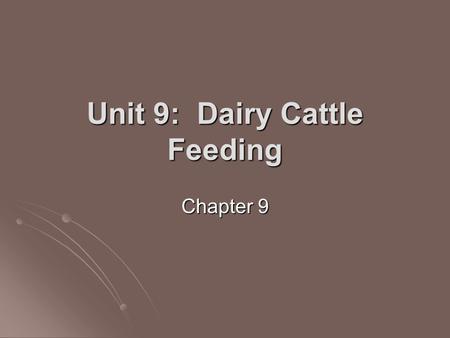 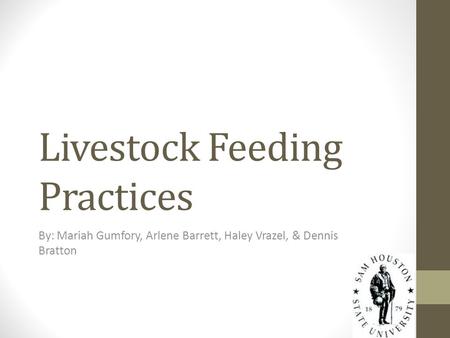 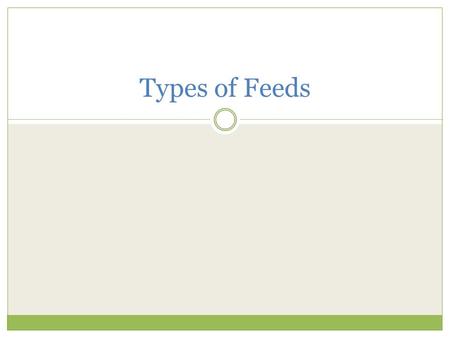 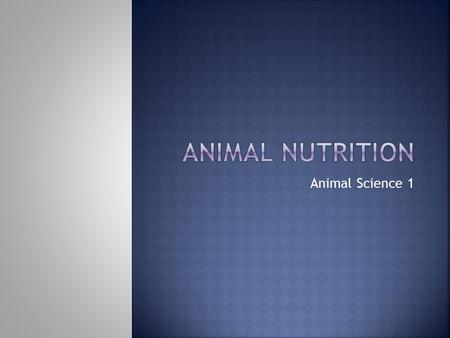 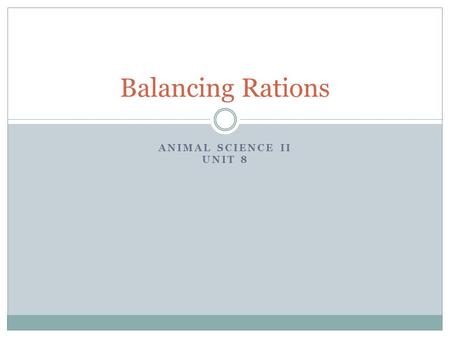