6 Interchangeable Parts
Eli Whitney Contract to make 10,000 guns in 2 years Took over 10 years & still had flaws Made all of the parts exactly alike

10 Engineers built the Cumberland Road (National Road) to last
Financed by the gov’t in 1811 Finished in reached Columbus, OH (US Rte 40) Private investors built most of the new roads- Planned on collecting tolls (Turnpikes)

13 Canals Transport goods cheaper on water Built artificial waterways
By 1840’s nation had 3,000 miles of canals Most famous was Erie Canal opened in 1825 Links the Atlantic Ocean with the Great Lakes

17 An expanding economy Market revolution The Rise of Manufacturing Bought cotton, grains, & other raw materials & turned them into products that could be sold for a profit Began in the northeast

20 Working outside the home
1800’s rise in manufacturing increased the demand for people who would work outside the home, for a specific number of hours each day & for a certain amount of money Used the specialization system

22 The Role of Banks The Rise of the Banking Industry Appeared in the 1780’s & 1790’s To start a new bank, a group of private investors generally would obtain a charter from the state Banks made money by charging interest for loans

24 Uncontrolled Lending 1800’s states didn’t restrict banks’ run away lending Often made loans to people who couldn’t pay them back If a bank doesn’t have enough money, it could lead to economic crisis

25 If a bank couldn’t meet the depositors needs, it would go out of business
Led to depressions, bank & business failures, & widespread unemployment

27 Problem with these notes was that banks simply printed more of them whenever they needed money, so the value of this money was unpredictable 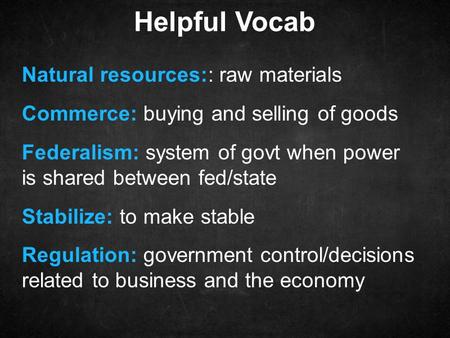 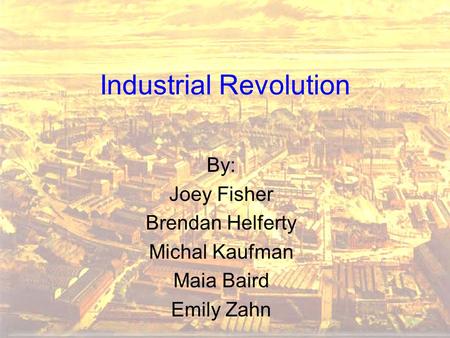