2 To study governments, geographers look at the following:
Types – Who rules and who participates. Systems – How the power is distributed.

3 Types of Government are based on one key question: Who governs and what is the citizen participation? There are three types of governments: Autocracy, Oligarchy, and Democracy

4 Autocracy Government in which the power to govern is held by one person. Generally the power to rule is inherited or by military force. There are three types of Autocracy.

6 #2 Absolute Monarchy A monarchy has a king, queen, emperor or empress.
The power is usually inherited or passed down from family members. The monarch has absolute power meaning they can make all decisions without consulting anyone.

7 #3 Constitutional Monarchy
Kings, queens or emperors share power with elected legislatures. Generally the Kings are nothing more than figureheads. The government is a democratic one that limits the monarchs power. Example: Great Britain

8 Oligarchy A government in which a few people such as a dominant clan or clique have power. The group gets their power from either military, wealth or social status. Elections may be held but offer only one candidate. Examples: Greek city states

10 In a democracy…. Individual freedom and equality is valued.
Free elections are held Decisions are based on majority rule. All candidates can express their views freely. Citizens vote by secret ballot.

12 Parliamentary Democracy
Voters elect members to the Parliament (legislature) Parliament has two Houses: House of Commons: The Political Party with the most votes in the House of Commons chooses the Prime Minister, the government’s leader with no set length of term. House of Lords: Little power with most members being nobles having inherited their titles

15 Putting it all together….
The United Kingdom is an autocratic constitutional monarchy with a parliamentary democracy and a unitary system. The United States is a presidential democracy with a federal system. What do those statements mean? 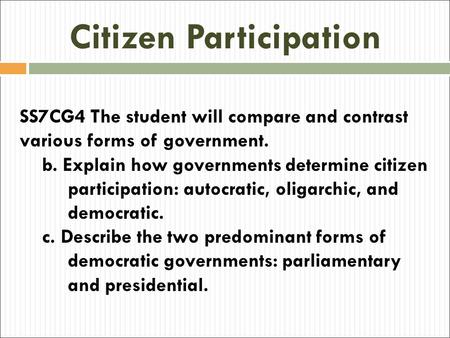 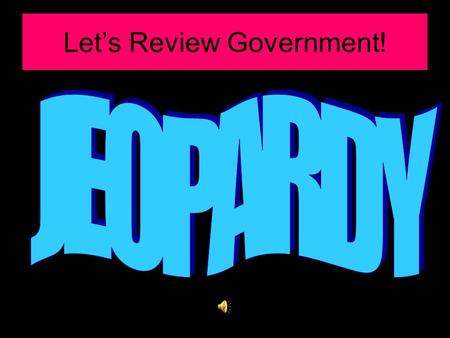