Presentation on theme: "Spokesperson for the South. South Carolina politician who was known for his extreme states’ rights position."— Presentation transcript:

1 Spokesperson for the South. South Carolina politician who was known for his extreme states’ rights position.

2 A man made ditch filled with water that connects two larger bodies of water.

3 The first successful steamboat. Built by Robert Fulton in 1807.

4 Machine invented by Eli Whitney which separated cotton from its seeds. It made cotton growing profitable and increased slavery in the South.

5 Canal linking Lake Erie with the Hudson River. It was finished in 1825. It linked New York City with the interior of the country making New York City a leading city.

6 Building in which goods are manufactured.

7 Built the first successful steamboat, the Clermont, in 1807.

8 The main cause of the War of 1812. British policy of stopping American ships and searching for deserters from the British navy. In many cases, the deserters were actually American citizens who were kidnapped and forced to serve in the British navy.

9 Period of time in the early and late 1800’s where goods which previously were made in homes were now made in factories. New sources of power were used. Interchangeable parts were a key aspect of the Industrial Revolution.

10 Identical, machine made parts developed by Eli Whitney. They made the assembly line possible.

11 The process of making a raw material into a finished product (manufactured good) through the use of machines.

14 Smuggled the ideas for factories to the U.S. from Britain.

16 Well made roads that required a fee be paid to travel on them.

17 The migration of people from the country (rural areas) to the city (urban areas) during the Industrial Revolution.

18 Conflict between Britain and the United States from 1812 – 1814 primarily over freedom of the seas and the impressment of American sailors. Called “Mr. Madison’s War” and the “Waster War.”

19 Spokesperson for the North. Politician from Massachusetts who was a great speaker who tried to protect the rights of New England merchants.

20 Person who invented the cotton gin and interchangeable parts.

Download ppt "Spokesperson for the South. South Carolina politician who was known for his extreme states’ rights position." 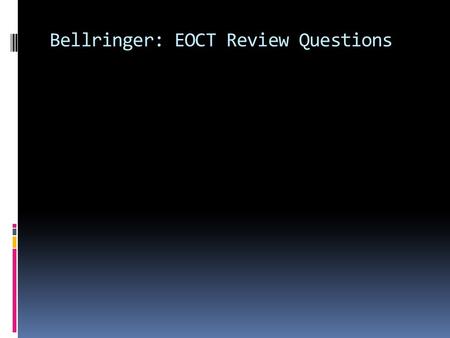