1 THE HIGH MIDDLE AGES: 1000 to 1300
The Norman Conquest 1066 William the Conqueror invaded England. He was the most powerful man in France. He was the Duke of Normandy, so this is called the Norman Invasion. He defeated the Anglo-Saxons at the Battle of Hastings and became the King of England.

2 William the Conqueror Being a foreigner, how did he make the English nobility loyal to him? He made them all swear allegiance directly to him!

3 France and England Thanks to William the Conqueror, England became the most powerful feudal state in Europe. Kings in England and France began building strong central governments. The King of England was powerful and controlled the nobles

5 The English legal system
1175 As King of England, Henry II set up the English legal system: 1. Common Law - Judges made law. Common Law is based on precedent: What past judges have ruled. 2. Circuit courts - Judges held trials. They rode on horseback from town to town. Dealt with major crimes. 3. Trial by jury - At first, the testimony of jurors helped the judge decide the case. 4. Habeas Corpus - The Magna Carta gave judges the power to overrule the king: A judge decides whether a man should have been arrested. It guarantees the individual a right against arbitrary arrest and imprisonment.

6 Common Law * Roman law was used throughout Europe, especially France and Italy. * Henry II rejected it in England and decided to use Anglo-Saxon tradition - Common Law - as the law of the land. * Common law is a body of rulings made by judges based on community traditions and previous court decisions.

7 Common Law When making a decision, a judge consults past precedent - what past judges have ruled in a similar situation. Example: An English judge, based on local standards, ruled that the killing a person in self-defense is not murder. That set a precedent: Ever after, judges in that community followed that precedent.

8 Common Law American law is based on English Common Law.
This is why lawyers have law books: They bring up past cases to convince the judge.

10 Magna Carta Less than 200 years after the reign of William the Conqueror, one of his descendants, King John, sat upon the throne of England. He was an exceedingly bad ruler. He stole, he told lies, and he put innocent people in prison. If he wanted money, he simply demanded it of any persons who had it, and if they refused to give it, he did not hesitate to torture them

11 Magna Carta King John of England broke every law in the book!
Church law - He confiscated church property. Feudal law - He confiscated barons’ property. Common law - He ignored centuries of law. The English barons made war on him. They defeated him and forced him to sign the Magna Carta. As a result, the King’s power was limited. This was the basis for England’s constitution.

12 He signed the parchment, either in
the meadow or on an island in the river, and then went back to his palace. It was said by some that he gnashed his teeth, and shrieked, and rolled on the floor like a madman; but the barons were hard at work seeing to it that many copies of this parchment were made and sent over the land to be read aloud in the churches. This parchment was the famous Magna Carta, or Great Charter, signed in The barons were then the most powerful men of the kingdom, and they saw to it that as long as he lived the king kept his word. After 50 years later, not only the barons but representatives of the towns were admitted to the council. This was the beginning of the English Parliament; and now, if a king ruled unjustly, he must account, not only to the barons, but to the whole people.

13 7 Basic Principles of the Magna Carta
1. Limited Government -The King cannot do anything he pleases. There are limits on the King. The King is limited by the law - and now this piece of paper known as the Magna Carta. 2. The Rule of Law -There is a body of law that has evolved over centuries. Everyone must obey the law. Even the king. 3. Balance of Power -If a King breaks the law, who removes him from power? His vassals, the barons had the right to get rid of him. 4. Power of the Purse – The King cannot raise taxes on his own. Before the King can raise taxes, he must consult the barons. 5. Private Property - The King cannot seize a man’s property. Every free man is entitled to three absolute rights: Life, liberty, property. 6. Due Process - An accused person is entitled to a hearing and trial. 7. Judgment by Your Peers - When put on trial, a man has the right to a jury. The King cannot choose the jury. The jury must consist of his peers - his social equals.

14 Hundred Years War England and France battled each other for over a century as to who had the right to the French Throne. In 1420 they signed a treaty in which Henry V would inherit the crown after the French king Charles VI. However both Henry V and Charles VI died within 2 years of each other and the battle as to who should get the crown continued.

15 But ... Rheims was controlled by the English.
Charles v. Henry English – Henry VI French – Charles VII Charles VII declared himself king…however declaring oneself king and actually being king were not the same. his people would not recognize him as king until he was crowned in the traditional manner and place. French coronations always took place at the Cathedral in Rheims. But ... Rheims was controlled by the English. 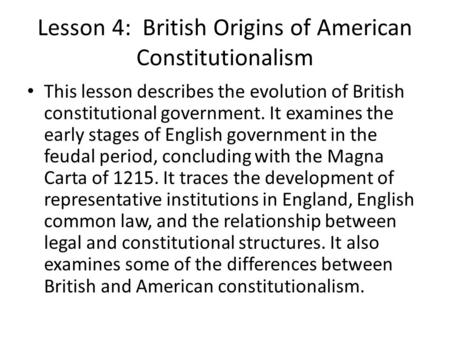 Lesson 4: British Origins of American Constitutionalism This lesson describes the evolution of British constitutional government. It examines the early. 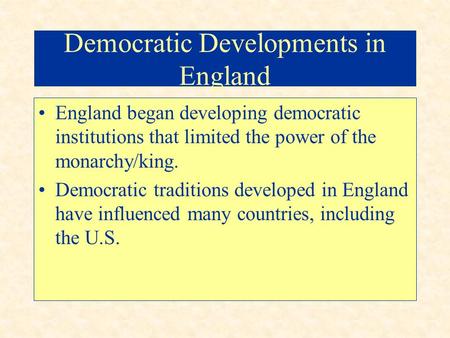 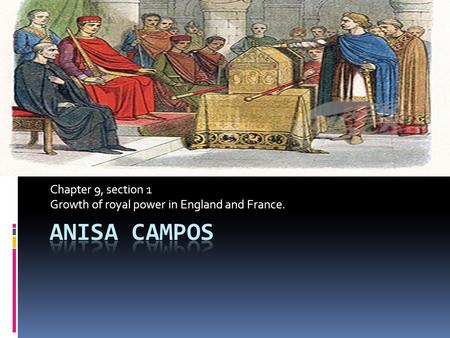